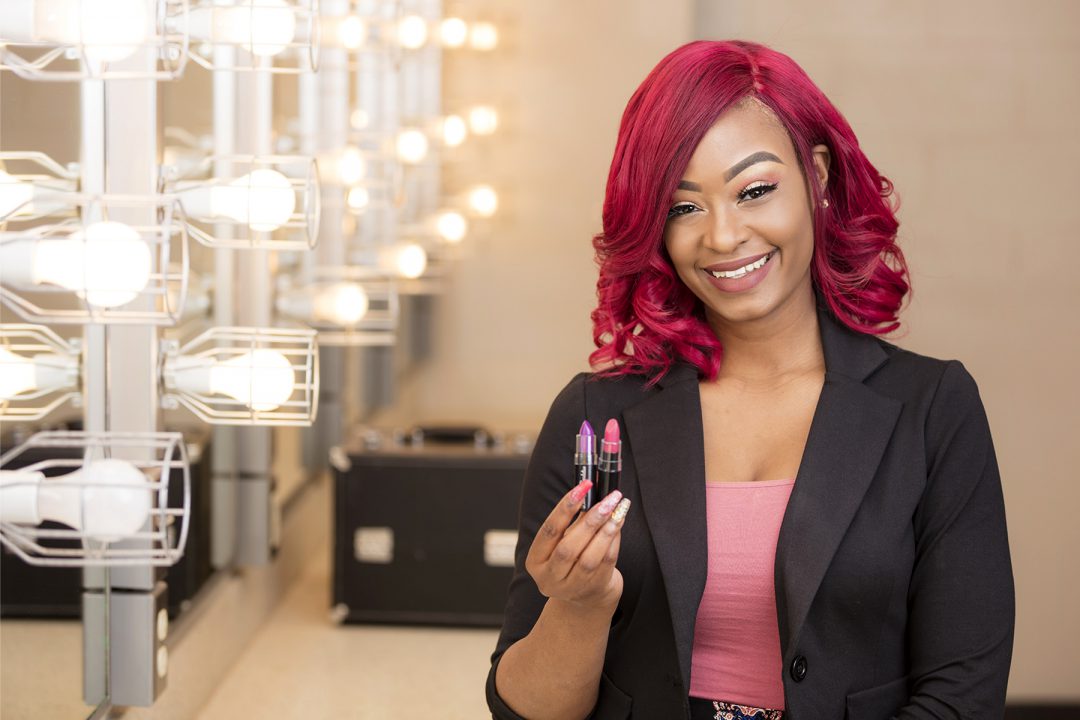 When his hands closed around her neck, Monet Cullins made a decision: it was the last time her boyfriend would hurt her.

“I didn’t lose consciousness, but my eyes just closed, so he thought I wasn’t breathing,” recalled Cullins, now a student at Tarrant County College Northeast. “He was trying to wake me up basically. But I laid there quietly just to make him think this is how bad it could be. That moment I was like, my kids are in the next room; what would he have told them? Is this how I want to live my life? Is this all I feel like I’m worthy of?”

That was in Houston in 2015. Feeling called to move to North Texas, Cullins packed up her three daughters. She found a safe place at SafeHaven of Tarrant County, which provides assistance to families healing from domestic violence.

“Initially I went into a program that gave me a fully furnished room at the shelter,” said Cullins. “I didn’t even have to buy toothpaste. They took care of helping me become stable, and I wanted to take advantage of that. Why not do something to make a better life for us?”

For Cullins, that meant two things: returning to school and launching a business. She had studied criminal justice at Houston Community College. Now she felt a different calling—starting her own cosmetics line.

“When I was in SafeHaven of Tarrant County, I did a lot of reflection,” said Cullins. “It made me think, ‘Why is this type of person attracted to me?’ I felt like it was going back to me having low self-esteem.”

That self-esteem problem was rooted in her lips. Cullins felt they were too big for her face, and she constantly tried to hide them beneath pale lip colors. After escaping an abusive home life, Cullins had a new mantra: embrace your insecurities.

“People mask the things they’re self-conscious about,” noted Cullins. “I believe the opposite. Put something bold on your insecurity. Magnify it. Then, it can’t affect you. You have no choice but to embrace it.”

While living at the shelter, she launched her business, Bold Lips Revolution. She saved her money, found a manufacturer and created a website. But she knew to be truly successful, she needed to finish her education. In 2016, Cullins began studying business at TCC.

“I was actually in five classes when I did my official launch in Las Vegas,” said Cullins. “And I was doing homework as soon as I finished the launch.”

She learned business principles and networked with contacts in the community. With the help of her mentor and professors, Cullins developed a real business plan.

“Monet’s passion for her business vision and her tenacity to strive in the midst of challenge have served her well,” said Sally Proffitt, TCC Northeast business department chair and Cullins’ fashion merchandising instructor. “She is resourceful while remaining open to new knowledge and guidance. She is goal directed and a powerful and confident marketing spokeswoman.”

She will also soon be a graduate, earning her associate’s degree in May. Cullins is already looking toward the future, with plans to go on to earn her bachelor’s degree as well as an MBA. Her business is growing, averaging 10 to 15 orders a month, and her lip colors have already been on models in New York and Miami Fashion Week shows. She credits her success to her education at TCC.

“I have pretty good revenue coming in from it, and that has to do in large part with me being in business school right now,” explained Cullins. “I don’t feel like I’d know anything if I didn’t have the basics, economics and things like that. So that’s how I’ve been able to keep myself going.”

In addition to learning how to operate a business, as a student, Cullins learned to juggle competing priorities.

“I had to figure out balance and how not to be overwhelmed with it all. I would say, ‘Let me make time to do something that is either going toward my brand or going toward school or going toward the kids, and then, maybe I’ll get a little sleep somewhere in there,’” she joked. “But I have to prioritize so I don’t get too overwhelmed and say, ‘It’s too hard; I can’t do this.’”

Proffitt says the key to Cullins’ success is that her plans are more than abstract.

“Other students can learn that it is important to have dreams but imperative to express them in a written vision, with goals and strategies for achieving them,” said Proffitt.

Next up for Cullins is her Ruby Kisses collection with 10 new colors. All orders come with a personalized note, and a portion of her proceeds go to SafeHaven of Tarrant County.

“I believe that it’s kind of a debt I owe,” said Cullins, who was recently featured on News 8 Daybreak. “I didn’t have anything. They gave me everything from sheets and blankets to towels and tissues. I didn’t need to provide anything for my children, and that was through donations from different people. And so why wouldn’t I give back? I wanted to pass those benefits on to somebody else.”

Cullins wants others to know that her business is about much more than makeup.

“I want what we stand for to be at the forefront of my company,” said Cullins. “If there is something he’s been telling you that you can’t do or something you feel like you can’t do because you’re with him, just know that it is possible. There is light at the end of the tunnel. I’d like to be that light.”

Visit BoldLipsRevolution.com to shop Cullins’ lipsticks and glosses. If you are in a domestic violence situation, assistance is available through SafeHaven of Tarrant County.