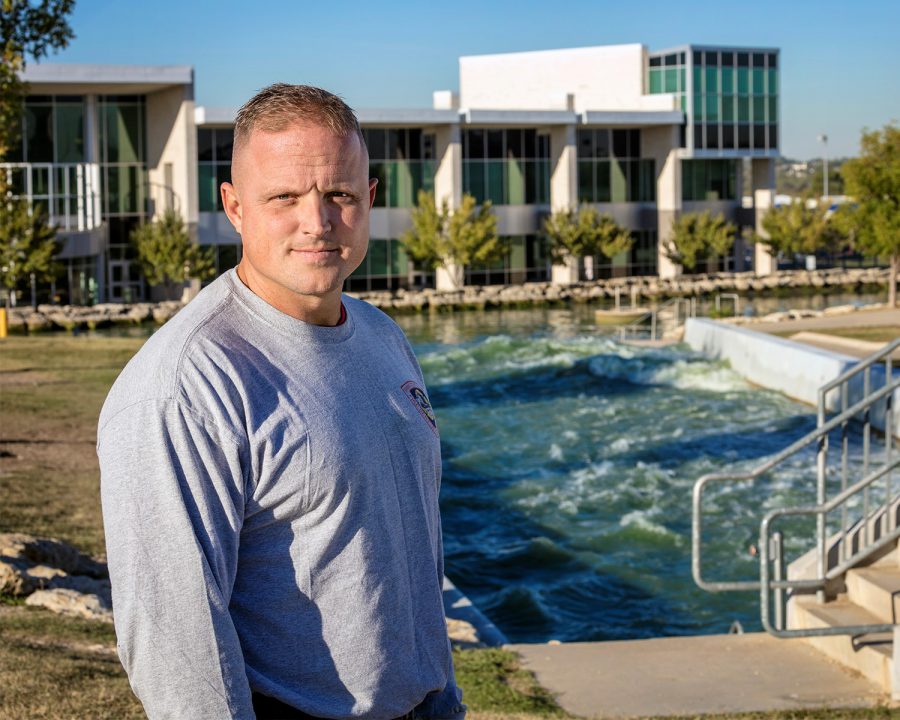 Matt Geller is a first responder who wears multiple hats. He is a lieutenant with Dallas Fire-Rescue, a member of the helicopter rescue team for the elite Texas Task Force 1 and an adjunct instructor for Tarrant County College’s Fire Service Training Center—where he trains working firefighters in special operations, such as vehicle rescue, rope rescue, confined space rescue, trench rescue, structural collapse rescue and swift water rescue. He recently spent almost two weeks along the Gulf Coast saving Texans stranded by Hurricane Harvey, one of the most devastating storms to ever hit the United States.

TCC: What is Texas Task Force 1?

TCC: Where did you deploy during Hurricane Harvey?

MG: I was all the way from Corpus Christi to Orange County as you head out of Texas into Louisiana.

TCC: What was your role?

MG: Texas Task Force 1 has multiple resources—rescue specialists on the ground, wide-area search specialists, medical specialists, water strike teams in boats, high-profile vehicles to assist with evacuations, communications specialists, and so on. My position is helicopter rescue specialist. There are maybe 25 of us on the team throughout the whole state. We’re a joint team; we use the Texas Army National Guard for the aircraft, the pilots and the crew chiefs to assist us with the rescues. We provide the rescuers, and they provide the crews and aircrafts. So it’s a pretty cool set up.

We performed hundreds of rescues—both “land and load” evacuations, where we were able to land a helicopter and load up the people, and live hoist rescues, where water had already overtaken the area and there was nowhere to land. My job was to actually go on hook and perform the rescue.

TCC: What was a typical day like during the worst of Hurricane Harvey?

MG: During the initial five days of the flood events, it was very busy because Harvey was a static storm. It wasn’t moving very fast; it would sit and spin over an area, so it created mass flooding. We literally flew in the bands of the storm throughout those first five days it was in the state.

I was on a day crew and came in at roughly 6:30 or 7 in the morning. We’d eat an MRE (Meal Ready to Eat, a self-contained meal consumed in field operations) and we were mission ready—they were shipping us out the door. We’d pretty much perform rescues until dark, 8 or 8:30 p.m., when the next crew came on with night-vision goggles. We would rehab our gear, get our air crew back in order, and dry our suits because we were in them that whole time. Usually about midnight, we’d get everything put back together, eat another MRE and get ready for the next day.

TCC: How did the weather challenge your team?

MG: We’re with the pilots; they’re the ones taking the responsibility for the whole team. They’re taking the helicopters, and they’re flying in the bands of this hurricane. The rain was literally peeling the paint off the aircraft. They have winds, squalls that you try to predict but sometimes you don’t have that luxury. The gusts are incredible. I don’t know how they do it, but we put all of our faith and training into these guys’ hands. That obviously is something that takes a lot. I give them everything. They don’t get enough credit, because they’re the ones who keep us safe and get us home. They’ve got more responsibility than anything.

TCC: What was the hardest aspect of the job for you?

MG: It was overwhelming to see how many people needed help. You see a bunch of people on rooftops, and your job is to choose the highest priority. It’s tough to see somebody holding their hands together praying at you and then you have to pass them up. You try to give them some sign of hope that “I’ll be right back,” but you have to clear the highest priority out first; you’re sizing up a large area and making a judgment call. Sometimes it’s overwhelming, but you have to make a decision.

TCC: Someone once told you that you couldn’t qualify for the helicopter rescue team. Why did you pursue the position anyway, and what did you learn from that experience?

MG: I was told that I was too big. I weighed 237 pounds at the time, and the max weight to be on the helo team is 215. I’ve never backed down from challenges; I set my mind to accomplish the task. I had four weeks before the weigh in and tryouts. I worked out twice a day and watched what I ate. I had to do a lot of swimming to even think about competing with the individuals I was going against. When the time came, I officially weighed in at 203, and I’ve worked hard to maintain my weight over the past six years. I believe you can accomplish anything if you set your goals to achieve it.

TCC: You took special operations rescue classes at TCC’s Fire Service Training Center before you became one of the College’s instructors. How did that training help prepare you for what you faced with Hurricane Harvey?

MG: I would not be able to get on the team that I’m on if I had not gotten involved with TCC. Early in my career, I had a couple events with the fire department that, frankly, told me that I needed to learn more about this job or I needed to get out of it. I chose the route of “I’ve got to learn more about this.” So I started taking every class I could and then I decided I’m going to try to start teaching this. And people were like, “Who is this young guy and what does he know?” It exposed me, but I think that exposure also made me stronger. TCC—doing all these special ops, actually instructing, being held accountable for the stuff I’m presenting—grew me into the person I am today. I owe everything to it.

Matt Geller has 17 years experience with Dallas Fire-Rescue. He joined TCC as an instructor in 2004.