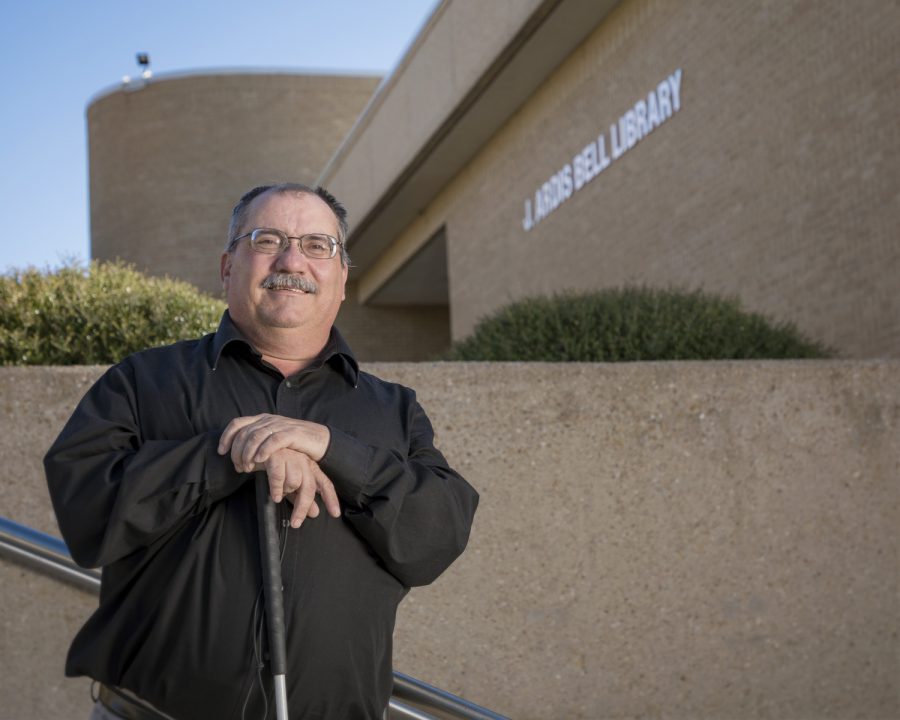 Larry Pike is a patient man.

Every day, he commutes four hours—two hours to campus, then two hours home—to Tarrant County College Northeast, where he is studying to become a licensed chemical dependency counselor. Getting to campus is no easy task. Pike suffers from Stargardt disease, an inherited disorder of the retina that has left him with extensive vision loss.

To get to campus on time, Pike rises at 5 a.m. so his wife Lisa can drop him off at the nearby TCC South campus. From there, he catches the city bus to downtown Fort Worth. From there he takes the Trinity Railway Express to Hurst, and from the Hurst station, a shuttle to TCC Northeast. When he returns in the evenings, Lisa is unavailable to pick him up, so he walks the couple of miles from TCC South back to his home.

His journey to college began several years ago, when he was laid off from his employer.

“In order for me to get a job where I don’t have to live on social security for the rest of my life, I figured it was time to come back to school,” said Pike.

After Pike earned his GED, the next step was college. He completed his basics at TCC South and transferred to TCC Northeast, which houses the College’s Mental Health & Human Services program. On both campuses, he turned to Student Accessibility Resources (SAR) for support. Pike says he wouldn’t have made it without staff members such as South Campus’ Robin Rhyand.

“She was a very big part of me staying in school,” noted Pike. “At first, I had so much trouble that I was ready to give up. But she encouraged me and helped me.”

To help compensate for his vision loss, SAR provided Pike a variety of resources, such as notetakers, a recorder to capture lectures and audio books. TCC Northeast SAR coordinator Kimberly Eason says the real key to Pike’s success lies within.

“Larry’s positive attitude along with his sense of humor helps him create a rapport with his instructors and peers,” said Eason. “Larry’s perseverance and self-advocacy are strengths that other students could learn from. Being a non-traditional student, he has a stronger self-awareness and is not afraid to ask for assistance.”

When Pike transferred to TCC Northeast, he began making that long, daily commute with no complaints. His commitment impressed Carol Merchant, the co-chair for Computer Science & Information at TCC Northeast.

“He navigates public transportation by himself, which has been a huge obstacle—in time, cost and reliability,” said Merchant, who taught Pike in her Intro to Computer class last year. “Once the shuttle bus ‘forgot’ about him and left him in the pouring rain for two hours. He navigates the campus by himself and is never late for class. With so many obstacles in his way, he could have easily given up. But he has never once wavered about completing his degree.”

On her own time, Merchant began assisting Pike one-on-one. They worked together to find the best ways to accommodate him so he would be successful in class. Merchant configured a laptop to make his computer access easier; she also contacted Lighthouse for the Blind, a nonprofit organization, and asked its technical staff to help them with special software for those who are visually impaired.

“There are a lot of people who help me out,” said Pike. “Every teacher I have had at TCC South and Northeast has just been great. They do anything they can for me to succeed. I can’t say that enough.”

He also made an impression on fellow student Holly Tuttle, who reads to him and gives him a ride home when his other transportation options fall through. Tuttle says Pike’s outlook makes it easy to want to help.

“Larry is a very friendly and caring person,” said Tuttle.

Pike’s education is not the first time he has had to overcome a challenge. The reason he is studying to become a licensed chemical dependency counselor is very personal; Pike went through substance abuse problems in his younger days. He knew he wanted to help others facing similar issues.

“I was a heavy drinker,” Pike admits. “Stopping was difficult right up until I had my daughter. I had to change in order for her life to be better. And when I decided that, it was not difficult at all.”

His 18-year-old daughter, Breanna, also is the inspiration for completing his college education.

“I can’t stop now. I can’t let her see me give up, so I have to fight through it,” he explained, adding that the support and assistance from his wife Lisa also is instrumental to his success.

When Pike accepts his degree—which he expects to receive in spring 2019—there will be no shortage of people waiting to congratulate him.

“I have never met someone that dedicated to reaching a goal,” said Merchant. “I am going to be there when he crosses that stage at graduation because he has earned it, through sheer grit and determination.”