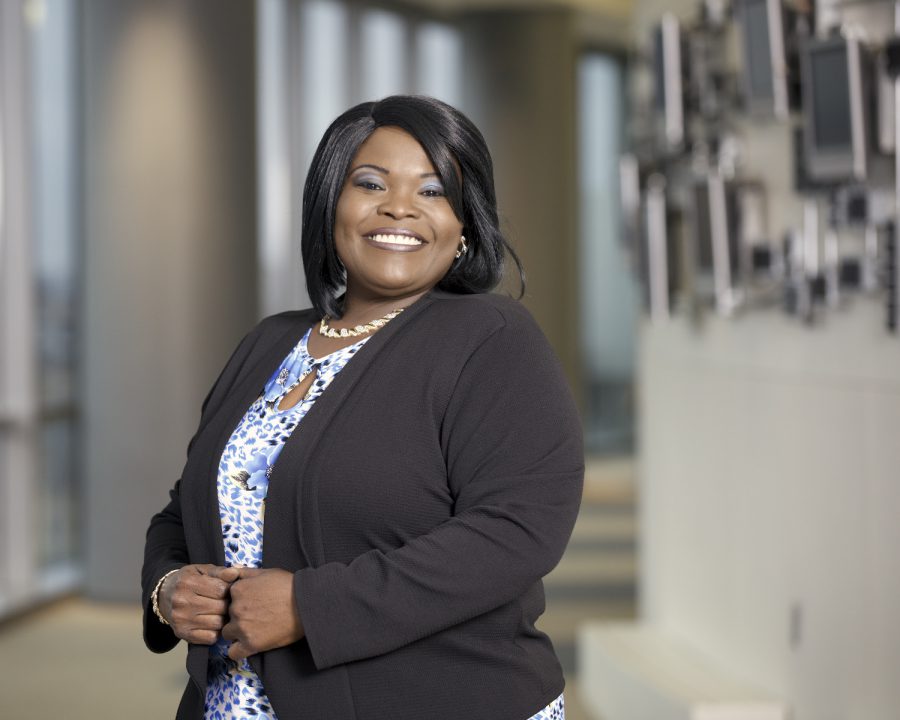 Walking the stage at graduation is a common goal for Tarrant County College students. But for Minika Tharpe, it wasn’t just about reaching graduation; she wanted to walk—literally.

“I went through a depressive state and got up to almost 450 pounds,” said Tharpe, who used a wheelchair to get around. “But I made up my mind that I would walk when I got my degree.”

Tharpe’s TCC story began in 1991, when she enrolled following high school graduation. Her father passed away the same year. After the stress and sadness became too much for her to bear, Tharpe left school. Both her depression and the medication she took to treat it caused her to eat more than necessary, and her weight reached dangerously high levels. She suffered her first major heart attack in 2012, and doctors diagnosed her with congestive heart failure.

Tharpe didn’t just struggle emotionally and physically; without a college education, she struggled financially. She knew she needed to return to school. Despite dealing with health issues, she decided to enroll at TCC Trinity River in spring 2013. This time, she took advantage of the resources and people on campus to help her stay on track.

“Minika was determined to succeed from the beginning,” said Kiesha Shelton, Tharpe’s academic advisor and her Transitions to College Success instructor. “She took school very seriously. She followed through on assignments, completed courses and set realistic goals.”

“She actually showed me how to plan my schedule out, so if I take this class here, I’ll be able to better understand the next one,” said Tharpe. “Dr. Shelton pushed me forward. Every semester she would set up a meeting with me and talk to me and understand where I’m coming from.”

“I was on the dean’s list; I was recognized,” recalled Tharpe. “Everything was going perfectly. Then I found out I needed surgery.”

Tharpe needed an operation to remove an ovarian cyst. But the doctor would not proceed because her weight made the procedure too risky.

“There was nothing he could do,” said Tharpe. “He couldn’t make me stop eating. It was something I had to decide in my own mind and heart.”

As she worked toward her associate degree in sociology, Tharpe tried to lose weight. Instead she gained.

“Even with the medications and the weight loss pills and trying every diet you can imagine, nothing worked,” she said. “I would lose weight, then something would happen and it was like, ‘There I go again.’ At the end of 2015, I told my mom, ‘I can’t do it anymore. I think I’m going to die.’”

Late that year, the cyst on her ovary began to cause bleeding, forcing doctors to perform an emergency procedure to save her life. But she was still in danger. Tharpe’s doctor told her very simply that if she didn’t change, she would die. He also offered hope. If Tharpe could lose 40 pounds, she would qualify for a gastric vertical sleeve procedure that would help her consume less food.

“He said, ‘I’ll do the surgery on you if you make a promise that you really want to lose the weight,’” said Tharpe.

This time, she committed to change and managed to lose enough weight to safely undergo the gastric procedure. She came off the table another 40 pounds lighter but with stronger willpower.

“Now, you have to go by the diet plan or you get sick,” explained Tharpe. “Before, if it was there, I ate it. I grew up in poverty, so we didn’t have the healthiest things anyway. So I had to learn to eat healthy and push myself forward.” As the weight began to come off, Tharpe reached an important milestone: commencement. During the ceremony, she achieved two objectives: she earned her associate degree, and she walked.

“It was important because I know who I am inside my heart,” Tharpe reflected. “No matter what I go through in life, no one can take my diploma or that moment away from me.”

Carter Bedford, director of Student Development Services at TCC Trinity River, met Tharpe through her involvement on campus. He says Tharpe never let her past dictate her present or her future.

“Minika has experienced the ups and downs of life, and she is very focused on how she wants to live now,” said Bedford. “She is a great example for others. It’s a story of redemption. She’s here and thriving and succeeding.”

Tharpe says she didn’t succeed on her own—and that Bedford, like Shelton and others at TCC, helped her stay focused on her goals.

“When I started walking, I would stop by Mr. Bedford’s office and lean on the wall like, ‘Lord have mercy, I don’t know if I’m going to make it to class today,’” said Tharpe. “But he didn’t let me give up.”

Tharpe also didn’t give up when she discovered that her chosen profession, social work, was not what she ultimately wanted.

“I love people, but my heart is too soft,” she explained. “I’d listen to my clients talk, and I’d start crying.”

So Tharpe set her sights on another associate degree, this one in entrepreneurship and small business management. She will graduate from TCC for the second time this May, then transfer to West Texas A&M University to earn a bachelor’s degree with a specialization in human resources management. Today, Tharpe is more than 200 pounds lighter, and she continues to lose weight. She eventually wants to work with obese teenagers and help them find hope in their situation.

“It used to be so hard for me to look in the mirror,” Tharpe said. “I had to learn to believe in myself, to believe I’m worthy of becoming successful.”

She counsels other students who are struggling to get involved on campus. “If you get involved, you have more resources, more know-how. You have people who can help you through. And I want to be one of those people who helps the next person through, because I’ve been there. I know what it’s like.”

TCC helped Tharpe see herself in a different light.

“My education is what set me into motion to become who I am today,” said Tharpe. “I allowed my past experiences and depression to get me into that wheelchair. I had to find something to pick me up. That’s what TCC did for me.”

To find out how to get involved on campus, visit the Student Life webpage.