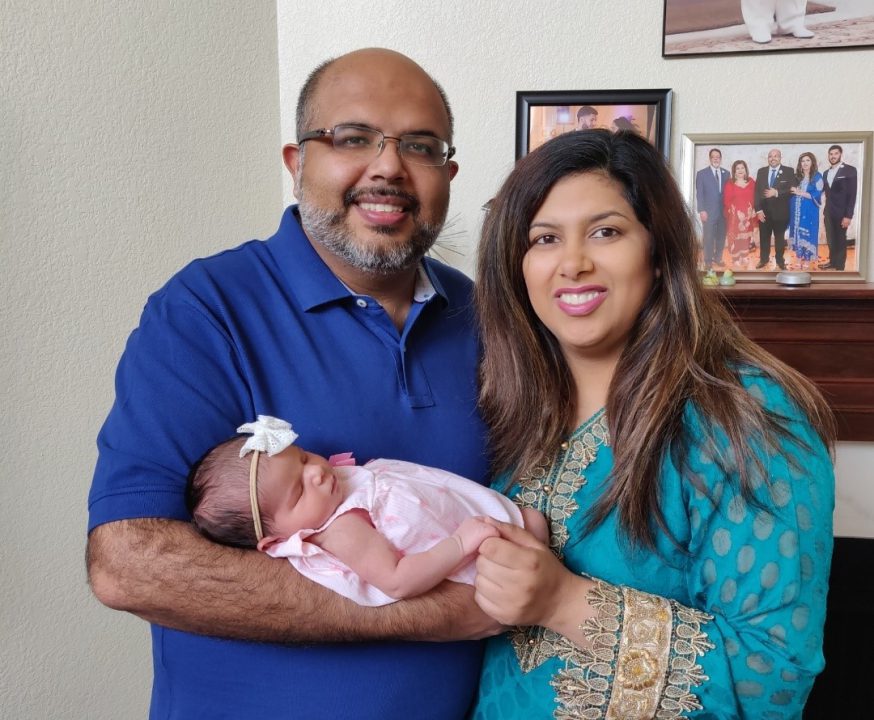 Remember the parlor game in which someone yelled “FREEZE!” and everyone immediately turned to statues? It was kind of like that last March when the COVID-19 pandemic brought normal life to a halt.

Or almost, because two members of the TCC Northwest family discovered that pregnancies don’t come with “pause” buttons. Aaly Meherali (Chemistry), April Trafton (Academic Learning Center) and their respective spouses became parents during the lockdown. While their experiences were not what had been expected, there were benefits to help offset the complications.

Daughter Lenora was born to the Trafton family on April 5, and it was far different from when older brother Ezri arrived in 2018, when there was no COVID shadow hanging over hospitalizations. “My first time I had a very clear birth plan,” Trafton said. “Then this time the doctors just said, ‘It’s changing by the hour what the rules are.’ Luckily, my husband was still allowed to be in the delivery room.”

Another change was in the length of the hospital stay – three days for Ezri, 24 hours for Lenora. “They wanted people out of the hospital as soon as possible,” Trafton said.

Aaly and Kirin Meherali had no point of reference when daughter Elayna, their first child, arrived on May 15, but their concern over who could be where was the same. “We were kind of worried in terms of who the extra person, if any, would be. Early on, the doctor said that she (Kirin) would be the only one in the delivery room,” Aaly Meherali said. “Then they wound up saying she could have one other person. I kind of wanted her mom there at the same time, but we could only have one, so I said I’d be there for her.”

He was there for her at home, too, although as with many a first-time dad, it seemed “just a big blur. The days kind of blended together.” Fortunately, Kirin had worked as an event planner and worked out a workflow. “Trying to figure out sleep patterns and feeding schedules,” Aaly said. “Thank God for her.”

Kirin Meherali’s mother helped out, as did April Trafton’s mother-in-law, but there was precious little of the customary flood of friends and relatives popping in to see the new arrivals, although the Meheralis did have some drive-by viewings.

Trafton’s parents have yet to see their granddaughter. Her dad has some health problems and is loath to risk a flight from Washington State. “They say they’re still planning to come at some point,” she said, “but we don’t know when.”

But, as spring turned into summer, which turned into fall, the two families had settled into a comfortable, but busy, routine – one that included both an infant and a work-from-home parent. Each school day, Trafton’s husband Jacob drops Lenora and Ezri at his mother’s house before going on to his job while April logs on for a day’s work with her colleagues and with students needing help from the Academic Learning Center.

The Traftons had worried that their son might display a bit of sibling rivalry, but that’s far from the case. After all, Ezri is a variation of Ezra, Hebrew for “my help,” which is just what he does. “He really likes his sister,” April said. “He likes to play with her, learning to share his toys. And he loves to show her the things he’s drawn.”

Aaly and Kirin Meherali follow the schedule she’s drawn up. Aaly’s up with Elayna about 6 a.m., then logs onto his TCC work about two hours later when Kirin takes over. She has plenty of time for her daughter, having lost her job as her employer went through bankruptcy. “You’ve got to see a silver lining,” Aaly said of the layoff. “It’s really a blessing in disguise. It’s definitely tough, her not being able to work, but the pros outweigh the cons. We’re kind of happy with the place we’re in right now.”

Ditto for the Traftons. “At some point we’ll all go back to campus, and everything will open up the way it was, and we won’t have to wear masks anymore,” April Trafton said. “But, for the time being, we’re just trying to make things enjoyable with the situation we have.”