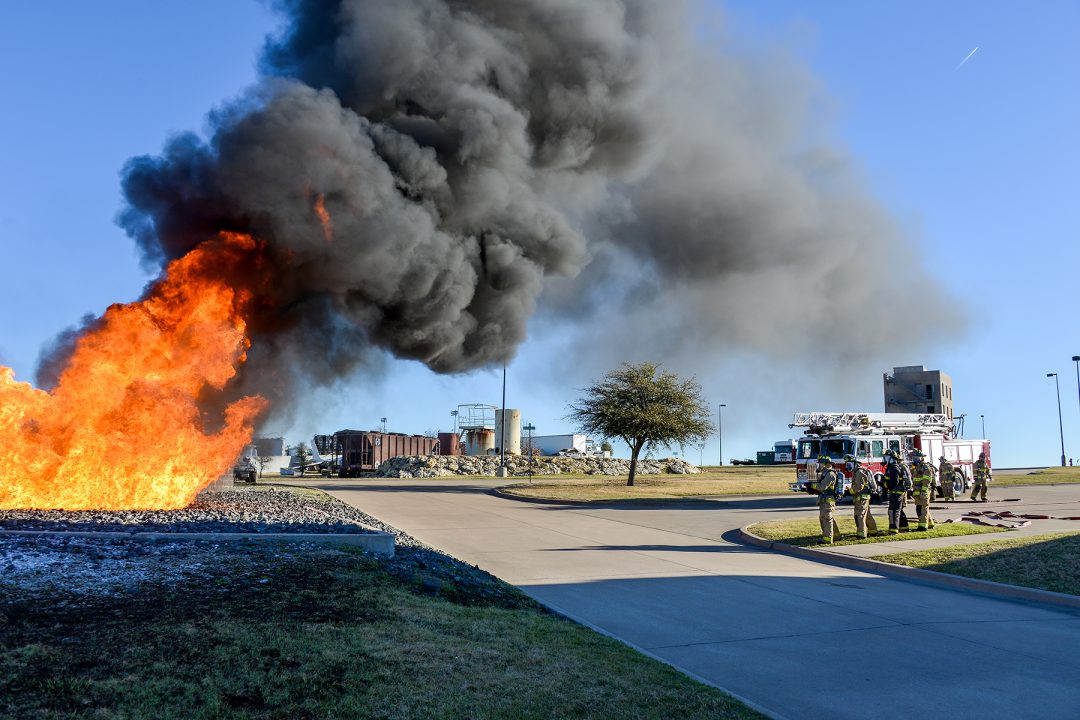 In August 2020, TCC’s Chancellor Giovannini approved a plan to merge three units at TCC Northwest — the Criminal Justice Training Center, the Firing Range and the Fire Service Training Center — into one cohesive entity now known as the Public Safety Training Center. The new PSTC retains the three programs of Law Enforcement, the Firing Range and Fire Rescue and will now be under the leadership of one director, Steve Keller, who was promoted from his previous position as director of the Fire Service Training Center. This reorganization brings a unity to the service model the programs are offering, and it will save the College money.

“In the past there were three buildings with walls between them, both physical and metaphorical,” Keller said. “While the physical walls remain, at least for now, the metaphorical walls have now started to come down,” Keller explained, “You know, we didn’t used to talk to each other much. We didn’t really need to, or so we thought. In fact, in some ways, we were in competition with each other for resources. Now, we are working together and starting to align both our processes and our interests.”

That lack of alignment in process was the impetus for this reorganization.

“Five years ago we had discussions about making a change like this, but those conversations didn’t really go anywhere,” said Sonya Brown, dean of Public Services, Social and Behavioral Sciences. “But we kept discussing it and really getting our thinking straight about how to streamline our operations and be more efficient.”

Keller recalled, “When Dr. Blankenbaker came on board as president, she also noticed the lack of alignment in our processes. Even down to the difference in the way we were requesting resources.” He explained, “She challenged us to be forward-looking and to start speaking the same language.”

Brown, Keller and Rafael Perea, who at the time was serving as the interim director of the Criminal Justice Training Center, began working on strategic business plans for their areas. Keller and Perea took a deep dive into the FSTC and the CJTC, evaluating the current state, aspired state and strategic direction of each of their programs. Brown did the same thing, but at the divisional level, which encompasses not only Law Enforcement, Firing Range and Fire Rescue, but also several academic departments. The work they did on these strategic business plans ultimately led to a plan to merge the three areas. This strategic business planning process is something the entire President’s Cabinet has been engaged in over the last year, according to Serafin Garcia, assistant to the president at TCC Northwest.

The immediate benefits of this reorganization can be felt by faculty, staff and students.

“A lot of this work has just begun,” Keller said. “I have a regular meeting that includes all of the coordinators across each program so that they know what is happening across the board. We’re able to share best practices that way, which we can adopt across the PSTC.”

One recent example of this is how each area has dealt with the COVID-19 pandemic and the return to in-person instruction.

“Everyone was following CDC guidelines,” explained Brown, “but they were implementing them in different ways. By having the coordinators meet and talk about what they were doing, they started identifying different strategies that were working the best and then adopting them across all three programs.”

At the student experience level, some simple changes like alignment in registration and scheduling policies can make a big difference. According to Keller, many students enrolled in Fire Rescue also end up enrolling in the Law Enforcement program so that they can become investigators. “Prior to our reorganization, these students would have two very different experiences in getting signed up and registered between the two programs. It’s much smoother for them now,” Keller said.

This alignment is something that outside stakeholders also see as a benefit. Chief Wes Rhodes of the Euless Fire Department is also an advisory committee member for the PSTC. He says, “It does make for one cohesive unit which will allow the two disciplines to possibly help save in some funding needs by minimizing duplication of resources needed and also I believe will help in a better understanding and working relationship between the two going forward.”

As they look to the future, Brown and Keller both have big ideas about how the PSTC could evolve.

“We are envisioning lots of areas to grow our programs and ways to expand what we offer. Everything from new training facilities that can be used for joint training exercises between law enforcement and fire rescue trainees to unified branding so that the image we present to the community is of one cohesive entity,”  Keller said.

According to Brown, “All of the planning we are now doing is coming out of the strategic business plan we have been working on, which is really important, because all of our stakeholders have had input on that. Our faculty, our staff, our advisory committees and the agencies we work with have all had their say. That’s important for buy-in and also for knowing that the direction we are headed in is really taking us into the next generation of public services.”