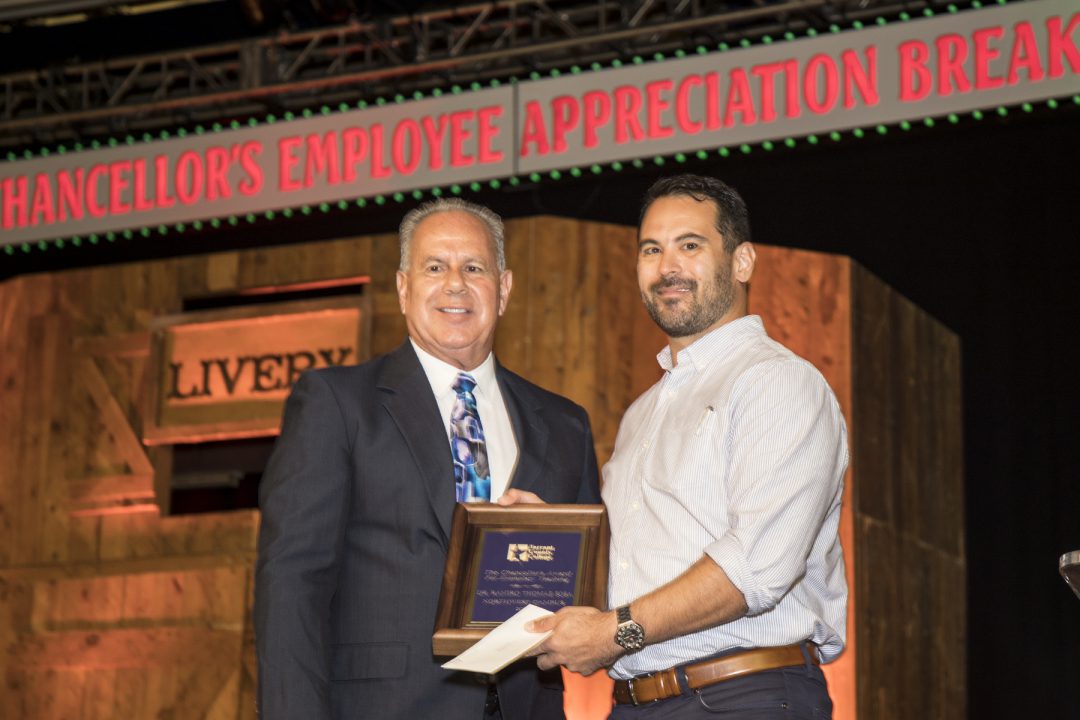 For a good indicator of why Thomas Sosa received the 2017 Northwest Campus Chancellor’s Award for Exemplary Teaching, stop by his office a few minutes after one of his biology classes concludes.

He’s with a student, and they’re discussing sugars. Another student waits outside. She’s confused on the types of biochemical covalence. Before she can get her turn, however, a third student shows up. This time the topic will be DNA.

“I try to be available,” Sosa said. “Science is hard. It’s almost a foreign language. I know what it is to be an undergraduate. I was there not too long ago, and it’s challenging. I think they (students) need that support to succeed.”

And his students appreciate that support. One student letter in his Chancellor’s Award portfolio read, “From the very beginning I knew you were going to be one of my favorite professors. Your passion for both biology and your students is easy to detect.” Another wrote, “Keep doing what you’re doing, because I believe that you should be the benchmark for what a professor should strive to do, and that is to inspire students.”

Teaching was nowhere on Sosa’s radar when he was earning his doctorate in molecular biology. “My focus was on research, and I thought for sure that I would end up in a job in biotech or pharmaceutical research,” he said. “But I soon realized my strengths and weaknesses, and one of the things I was really good at and also enjoyed was working with undergraduates.”

Sosa had finished his Ph.D. when a friend who teaches in the Fort Worth ISD learned of an opening in biology at Northwest, telling him he’d be perfect for it … and it for him. “I was transitioning to where I was moving out of post-doctoral work and looking for an opening,” he said, “so in a sense this opening found me and here I am.”

So why does he think the judging panel, all former Chancellor’s Award winners, selected him? “That’s really tough,” he said. “But here’s what I’ll say about the other nominees (Mike Esquivel, Logistics; Zach Frohlich, Speech; and Jason Miller, Criminal Justice) and about the other people in our department — they’re amazing. And I think it really drives us to be better – not better than one another, but we all have really high standards of excellence. And I think that seeing these other people and how good they are, mimicking what they do, seeing positive examples … it can’t help but rub off.”

If you haven’t gotten around to congratulating Sosa on his award, stop by his office – WTLO 4116.

Be aware there may be a line.