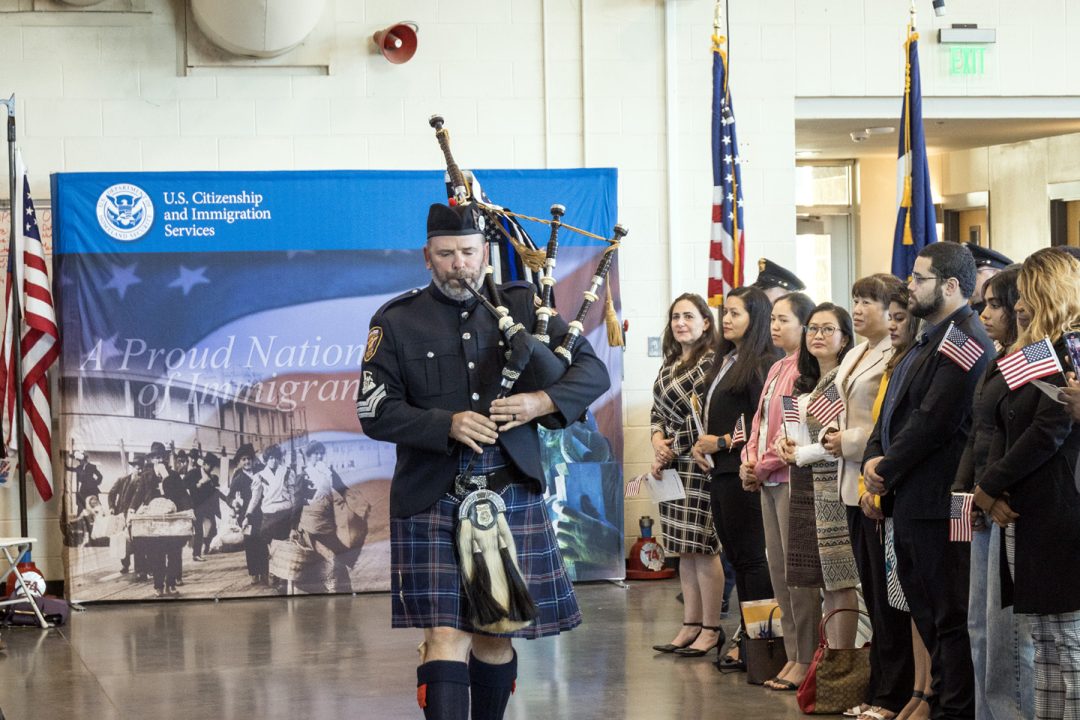 In keeping with TCC’s commitment to serve the community, on Oct. 21, TCC Northwest hosted a naturalization ceremony, which saw 35 candidates from 16 countries become U.S. citizens. This was the first such ceremony held at a TCC campus.

Two TCC students, Yvonne Ebot, from Cameroon, and Ifrah Ali, from Somalia, became U.S. citizens that day. Both Ebot and Ali are pursuing careers in healthcare.

Ebot, currently an LVN, is taking classes TCC Southeast toward a BSN degree with the goal of becoming an RN. “As a citizen of the United States of America, the sky is the limit. There are so many opportunities here,” she said. “Serving this country is something I also take seriously and with pride. I am proud to be a citizen of the best country in the world.”

Ali is studying Surgical Technology at TCC Trinity River East. Ultimately, she wants to become a nurse. “When I return home, I want to improve healthcare,” she said.

The event came about through a connection made by Lourdes Davenport, coordinator for TCC’s Center for English Language Learning at the Northwest Campus. Thanks to her work with a non-profit she co-founded to assist the immigrant community with immigration and education, Davenport met the district director of the U.S. Citizenship and Immigration Services (USCIS) Dallas office. She spoke with him about holding a ceremony at TCC. When he said yes, the TCC Northwest leadership supported the opportunity to do so, and planning began.

“It is exciting for TCC Northwest to host TCC’s first-ever naturalization ceremony, and I am proud to have been a part of making it happen!” said Davenport. “We are honored to share this special occasion with the people who will be pledging allegiance to the United States of America.

“It is a great way for the community to come here and feel invited and welcome,” she continued. “Several colleagues have shared their experiences about becoming naturalized citizens and are proud to open our campus to make it as special for others.”

TCC Northwest President Zarina Blankenbaker concurs. “Tarrant County College’s goal is to serve the community. The Northwest Campus was delighted to host our inaugural naturalization ceremony,” she said. “We want our community to know we are here and are an integral part of the milestones in their lives. As the community’s college, we are a microcosm of society and understand that education is the key to civic engagement.”

Congratulating the new U.S. citizens and acknowledging their hard work to arrive at this point, Lisa Benedetti, dean of the humanities division at TCC Northwest, said, “Gaining legal citizenship is a matter of honor and respect.”

Teresa Ayala, president of TCC’s Board of Trustees, served as keynote speaker for the ceremony. She shared the story of her great, great grandmother, Mama Regina, who immigrated to the United States in the early 1900s to escape the Mexican revolution. Telling how her great, great grandmother sought a better life for her family, Ayala said she was bound to a train and clinging to her children to prevent being separated from her family.

Although Mama Regina came to the United States not knowing the language or having a formal education, she saw possibilities for her family and future generations. She viewed the United States “as a land of opportunity for a better life and a promise for the future,” said Ayala.

Celebrating the diversity new citizens bring to the United States because it makes the country unique, Ayala said, “I urge you to share your experiences and story with others because by doing so, you educate people about your path, your culture and customs, which ultimately creates understanding, further strengthens our communities and fosters a mutual respect.”

She went on to share about TCC and how she considers it to be “one of the greatest educational opportunities and pathways to success” in Tarrant County. Ayala explained that she knew firsthand about the value of an education at TCC because she attended the Northwest Campus. “I found a home at TCC, and you will too,” she said.

Ali agrees. “TCC is my home. I wouldn’t want to go to another college.”

Ligia Sacia, originally from Mexico, shed tears of joy throughout the ceremony. “Many people born in this country don’t understand the real meaning for us as immigrants to achieve this.” Holding up her citizenship certificate, she said, “For me, this is my birth certificate. I was born today.”