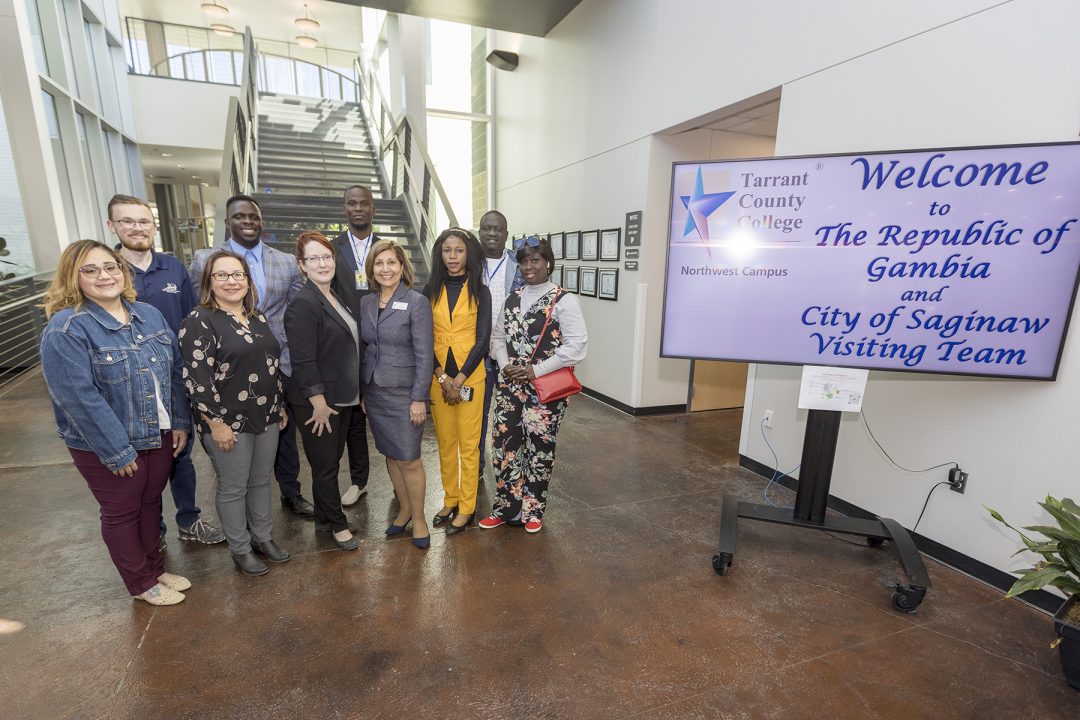 Many people travel to TCC Northwest to learn, but few come from as far away as The Gambia, a small country on the western coast of Africa.

Yet a four-person contingent from the Gambian capital of Banjul found its way to the campus on Oct. 18 for a crash course on American higher education, specifically community colleges. Why come all that way? Mamour Touray, a member of the Banjul city council of Banjul, joked that since the British “has never done much for us” since the country won its independence in 1965, “we hope to take parts of what we learn from this beautiful country to our country.”

TCC Northwest was glad to oblige and hosted the group on an all-day tour that began with a welcome and presentation by President Zarina Blankenbaker. “Our goal is to acquaint you with Tarrant County College,” she said, “and also to acquaint you with the mission of community colleges in this country and what roles community colleges play in the ecosystem of higher education.”

After her presentation, Blankenbaker asked if any of the visitors had questions. They certainly did, and they included partnerships outside TCC’s normal service area, enrollment criteria, scholarship availability and credit vs. non-credit.

The tour then got rolling – on golf carts driven by TCC staff. There were walking tours of the Criminal Justice Training Center, the firing range, the Fire Service Training Center and the fire/rescue facilities.

Lunch was squeezed in, and the tour moved north to CEATL (Center of Excellence for Aviation, Transportation and Logistics), to see the aviation facilities and the Corporate Solutions and Economic Development offices.

In summarizing the day’s activities, Blankenbaker wrote that there had been “undoubtedly an exchange of learning as we learned more about The Gambia and our shared opportunities and challenges. Information was shared about TCC and the important role of Community Colleges across the State of Texas and the United States. This was highlighted by the importance of Women’s Empowerment in The Gambia, including the prospect of Mayor Malick Lowe’s potential candidacy for a presidential bid.”

Indeed, the delegation had been scheduled to include Lowe, mayor of Jambul and a leader in an organization of women elected officials in Africa, but she had to bow out to participate in the organization’s summit meeting. So, it fell to Touray to summarize. “We have learned a lot from this trip,” he said. “Most of us have never been to America before and we hope to take what we have learned back to our country. We would be very pleased to welcome you to The Gambia.”

The framework for such an exchange is already in place since The Gambia and Saginaw, one of several cities served by TCC Northwest, have entered into a Sister Cities agreement. Saginaw City Manager Gabe Reaume, who accompanied the international guests on the tour, said that the agreement was the result of a large dose of serendipity.

Saginaw had wanted a Sister Cities partnership with Myanmar, Raume said, but political instability in the South Asian nation made that impossible. But an alternate solution was at hand in the person of Agdoulie Jarju, a University of North Texas graduate student and native Gambian who was interning in the Saginaw City Hall. Why not The Gambia, he said.

Why not, indeed! The Saginaw staff did some research and reached out to see if the Gambians were interested. They were, the Saginaw City Council approved the plan, the partnership was launched and this visit was its first fruits. “It (the visit to TCC Northwest) was great,” Raume said. “Everything was wonderful and exceeded all our expectations.”

The cherry atop the sundae came when Blankenbaker and student leader Juliette Sierra Carrer were guests at a reception at Saginaw City Hall, featuring Gambian food. Afterward, at a city council meeting, the Gambian visitors were recognized, TCC Northwest was thanked and the council made it official that Banjul and Saginaw are now Sister Cities.