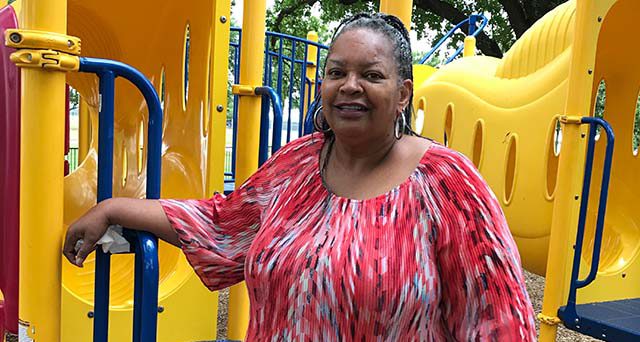 “Finally, I made it,” she said. “It was a long road, but Miss Lisa helped me get over it. At 67 years old I finally met my favorite teacher. I love her.”

“Miss Lisa” is Elizabeth Self, associate professor of sociology and child development at TCC Northeast, who has nothing but praise for her star pupil. “She has so much experience, so much knowledge,” she said. “Sometimes in class she’ll very humbly say, ‘Well, maybe I have something to add to that.’ It turns out to be the smartest thing that was said in the room. Her classmates have grown just from being in the room with her.”

It’s no wonder Page has much to contribute. She worked in day care settings for the military while overseas with her soldier husband and is now director of her own preschool – The Tot’s Haven Christian Academy in Fort Worth.

Frankly, there weren’t too many viable candidates in Page’s favorite teacher derby. “She wasn’t treated well,” Self said. “She was disrespected as a student as a child. But she’s taken that and said, ‘That’s not who I am, and I’m going to make sure and teach children that we respect people.’”

Page attended public schools in a small central Texas town in the late ‘60s, and racial integration was moving slowly. She was one of only two Black students in her 8th grade classroom. “Myself and Evelyn,” she said. “We stayed in that same class until I graduated, just us two.”

There were a few other Black students, but she could see them only during lunch and physical education. “We really weren’t valued,” she said. “Oh, we could play sports, but we couldn’t join clubs, couldn’t go to the swimming pool, couldn’t go bowling.”

But it was her treatment in class that stung the most. “I wasn’t expected to succeed,” she said. “They (teachers) didn’t come right and say I was dumb. It was things like, ‘maybe you don’t comprehend that.’ “

She still remembers a teacher handing her a writing assignment on which she’d made a high grade. “She looked at me and said, ‘I don’t understand how you can write perfect English, but you can’t speak it.’ Those things stick with you.”

Stuck with her, yes. Made her bitter, no. She heeded the advice of her mother, who had always told her that no one was better than anybody else, that all people are all God’s children and are all the same, no matter what anybody says. “I listened to my mama a lot,” she said.

After high school, Page applied to and was accepted by Prairie View A&M, but instead got married and moved to Arizona. When her husband was ordered to Duluth, Minn., she worked for the Duluth branch of the University of Minnesota. She took two courses there before orders took them overseas.

Later, when her husband was stationed in Fort Worth in 1999, she began taking classes on various TCC campuses, but working a full-time job and a part-time job while trying to raise a teenager “got to be a little much.” Eventually, she landed a position at Tot’s Haven where, because of her experience, she was made director.

Page’s return to TCC came in 2018 as the result of a requirement that schools such as Tot’s Haven needed directors to have a degree in childcare or child development before achieving accreditation. “I did not have that, so they (the school) offered to pay, so I came on scholarship,” she said. “Why not take advantage when you want something, can do it and you don’t have to pay for it? So, I came (to TCC) and was able to meet Miss Lisa.”

What’s next? She said she’s had her eye on retirement on retirement “forever,” but now that eye is kind of looking around, exploring the landscape. She’s not the sit-at-home type – can’t knit or crochet. “I might go back to school and get my bachelor’s,” she said. “I don’t know, but I still want to have some hands-on time with the class.”

“It’s amazing to see her with the children,” Self said. “She’s everything that we hope to have for our graduates. I look at Cheryl and say this is the type of student we want. This is the quality we want to pour into our students so that they can live up to what Cheryl’s shown.”