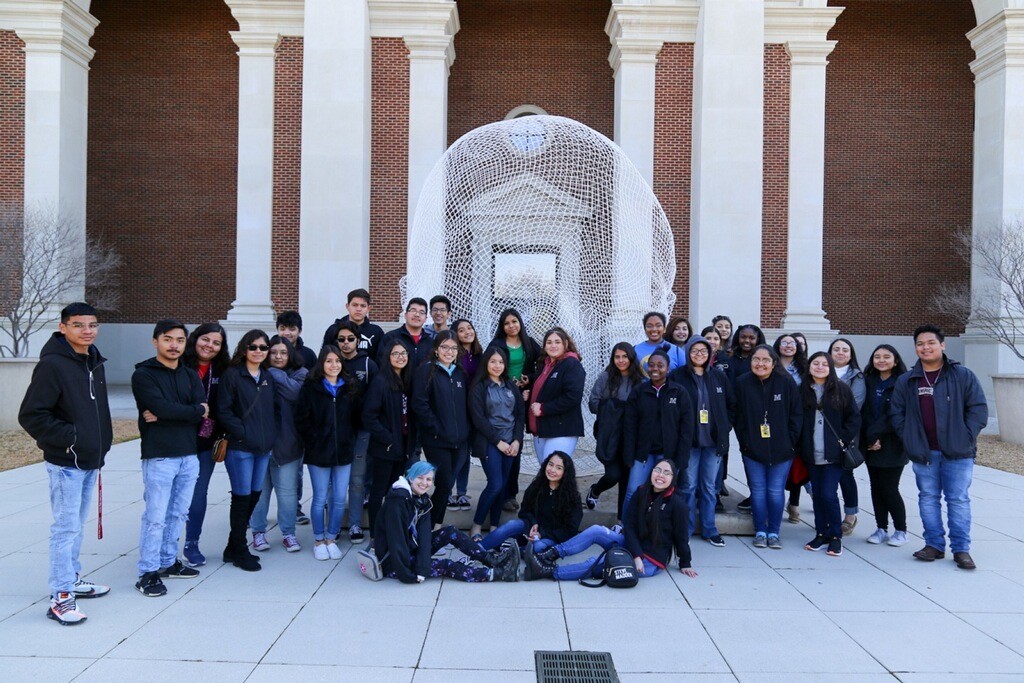 Students at Marine Creek Collegiate High School may have difficulty feeling collegiate, says Alicia Zavala Garcia, associate professor of Spanish at TCC Northwest. “Here, I think they sometimes feel they are just going to high school, she said. “They don’t realize they’re getting a college education at the same time.”

And so, to give the high school students a better idea of what college is all about, Zavala Garcia and colleague Alejandro Garza, decided to take 35 of them on a field trip to Southern Methodist University earlier this semester.

The day began with a tour of the Meadows Museum, conducted in Spanish by docents, with a concentration on the works of Spanish artists. Then the facilitated an art workshop at which the students, using pieces of paper of varying shapes and colors, sought to do their own pieces, self-portraits if they were so inclined, in the Cubist style of Pablo Picasso.

Then came lunch at a cafeteria on campus, followed by a tour of some of the primary buildings, including the Fondren Library.

“We wanted the students to have an exposure to the Hispanic works through the arts and doing a tour entirely in Spanish,” Garza said. “And then we wanted our students to see a different campus. A log of them didn’t even know about SMU, and so for them it was a big deal. We wanted them to look for opportunities that might not be in their circle right now.”

Were they impressed with what they saw?

“Big time,” said junior Yuliana Perea. “It had a museum right next to it, which was really cool. The campus was enormous. I thought that was really surprising compared to TCC. There were so many buildings. Like, the library was a whole different building.”

Impressive as the manicured campus and the majestic buildings were, the thing that seemed make the greatest impact was … the Starbucks next to the library.

“That was one of the highlights for them” said Garza. “It was probably the first time many of them had ever been to a Starbucks. They might not have had the money to afford it.

But tall, grande and venti aside, the students came away with more than an appreciation for the campus. They could see themselves there someday – or someplace very much like it.

“Yes, I personally do see myself walking through those streets and through the campus – with my Starbucks, maybe,” Perea said. “The campus was very nice, clean and structured to where I could see enough nature but also see how students could get involved in education. The environment was very amazing. I really liked it.”