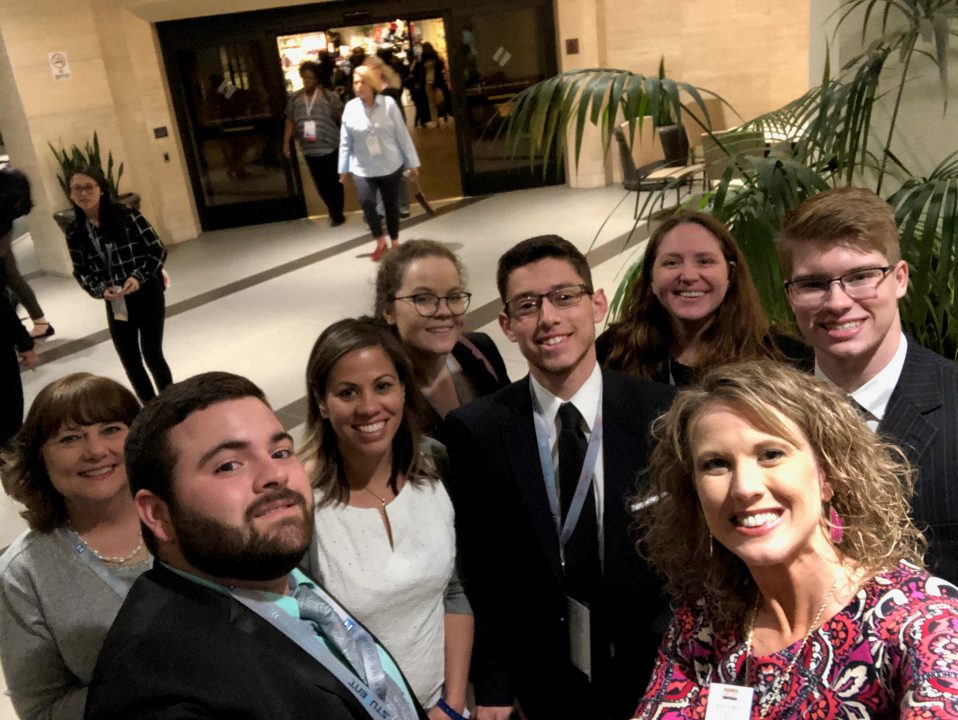 When she was working on her undergraduate degree in accounting at Sam Houston State, Jaye Simpson reached her junior year and was unsure of what to do with her career. She knew she didn’t want to become an auditor, do taxes or work in the corporate world, so she went to see her favorite professor and mentor, Jeff Strawser, to seek advice. “He told me I should teach.  I laughed and left his office. I never wanted to be a teacher,” she said.

The next two semesters, Simpson would return to his office again for advice, and both times he encouraged her to teach. Simpson went on to get her master’s degree in accounting from Texas A&M and then another master’s in education from the University of North Texas. Simpson remembers her first teaching experience vividly, “They handed me a textbook and syllabus on a Thursday and said, ‘Your class is on Tuesday, good luck!’” She was 22 years old when she taught her first class.  “I still remember walking into that large lecture hall and one of the students in the second row looked at me and said, “Is that our instructor!?” I summoned every ounce of gumption I had and said, ‘Yep! Let’s go!’” She’s been teaching ever since.

Last August, Simpson won the Chancellor’s Exemplary Award for Teaching. Those who work with her— her colleagues, her students, her dean — report a tremendous amount of respect for her positive attitude, her work ethic and especially for her dedication to students both in and out of the classroom.

“One of my most precious memories of Jaye was this day when my students were just flat.  They had no energy,” recalled Julie Russell, professor of Economics. She went on, “I told them, ‘If y’all don’t wake up, I’m going to call Mrs. Simpson in here to sing for you.’ They perked up and said, ‘Do it!’ So, I texted Jaye three words, ‘I need you,’ and she was there in a flash. She was such a good sport and totally game to sing to my students to get some energy in the room.”

Simpson and Russell have worked closely together as co-sponsors of the Business Professionals of America club since 2010. BPA is a national organization with chapters in 32 states and Puerto Rico. The organization has divisions for middle school, high school and post-secondary institutions, with two-year and four-year schools all competing against each other.  “We’re not just competing against other two-year schools,” Simpson said.

“I like to say that Jaye’s biggest passions in life are family, BPA and baseball,” said Clint Grant, dean of Aviation, Business and Logistics. “She’s a fierce advocate and very, very passionate about her students.”

For the TCC students who sign up for the club, it’s quite a commitment. “My teammate this year, he was new to BPA and nervous at first because it’s a lot of work outside of your regular schoolwork,” said Anna Melaun, the current president of BPA.  She continued, “We had to meet at least weekly with Professor Simpson as well as another faculty advisor in Speech, and she just made us feel at ease. She kept saying, ‘You guys know this material, you know how to look at financial statements and give the proper feedback.’ She makes you feel more empowered and motivated.”

Melaun met Simpson last year when she worked with her on BPA, but she has gotten to know her even more this year through taking her classes.  In describing Simpson, Melaun kept using words like motivating, engaging, and encouraging. She also spoke very highly of Simpson’s approach to teaching her class. “She is, by far, one of the best, most knowledgeable, and organized professors I’ve ever had.”  Melaun continued, “She has everything laid out, step-by-step for you, and she brings in personal touches that can really get you interested.”

Melaun recalled one assignment when Simpson incorporated her love for baseball.  Simpson has the students create financial statements for a hypothetical company that makes baseball bats. “For people who love baseball, that can get them engaged even if they don’t like accounting,” Melaun said.

This very much speaks to Simpson’s style. She knows a lot of students approach accounting with a certain amount of trepidation or fear. “My favorite students to work with are the ones who come in and know that this is hard, they think they are bad at math, and they just know they are going to fail,” Simpson said. She loves to turn that around and see the lightbulb moment for these students. “I hope my energy and enthusiasm comes through, and they see that they can use this in their life, and that this class won’t be the worst part of their day.”

When asked about what it meant to her to win the Chancellor’s Exemplary Award for Teaching, Simpson said, “It’s validation that what I do matters, that somebody notices. We all work really, really hard. I don’t work any harder than anyone else. I put in a lot of effort in my classes to come prepared to look at new ways to understand, to make that light click with my students, to put in all that work with my BPA students.”

In answering this question, Simpson couldn’t help but talk about her students. “Certainly last year with the financial analyst team, to take those students and have them win competing against Michigan, UT Dallas and UT Austin, when they call out that Tarrant County College won first place, it matters to these students. It matters,” she said.