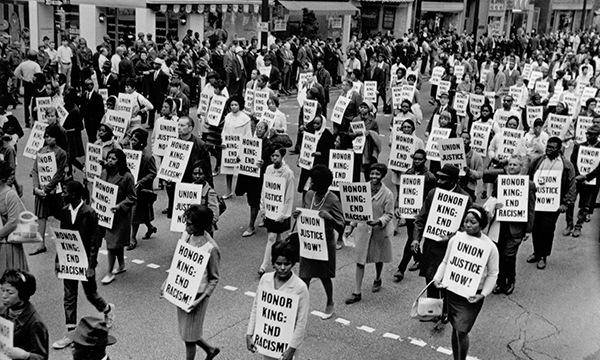 The “I AM A MAN” exhibition will feature iconic images of the NAACP Main Street protests, which focused on securing jobs for African Americans beyond janitorial staff in department stores that were happy to profit by selling to African Americans, but denied their right to work there.

Images include those of sharecroppers forced to live in Tent City, a small Tennessee town that was built after many Africans Americans were blacklisted for participating in Civil Rights actions such as lunch counter integrations, freedom schools, or even just registering to vote, and became unable to pay their rent.

Patrons will witness the portrayal of the Civil Rights Movement with images of James Meredith’s voyage to integrate the University of Mississippi and his March Against Fear in 1966.  The exhibit closes with images of King’s final, unplanned march in support of the Memphis Sanitation Workers Strike (became the Poor People’s March on Washington after King’s death).

Photos of celebrities like Aretha Franklin and Richard Pryor, and history-making figures such as Mozambican bullfighter Ricardo Chibanga will be included in the exhibit.

Sepia Magazine launched in 1947 as Negro Achievements and highlighted African American success stories. In 1951, two years after the death of its black founder, Horace J. Blackwell, white business mogul George Levithan took the helm. Under his guidance, Sepia Magazine became one of the strongest competitors to Ebony, another successful African American magazine.

Pictures will be displayed on the second floor of Trinity Building at the Trinity River Campus.

The “I Am a Man” exhibit will run Feb. 3-29, with a closing reception Thursday, Feb. 27, featuring an interactive discussion focusing on images from both exhibits. The public is invited to attend these free exhibits at TCC Trinity River, 300 Trinity Campus Circle, Fort Worth, TX 76102.