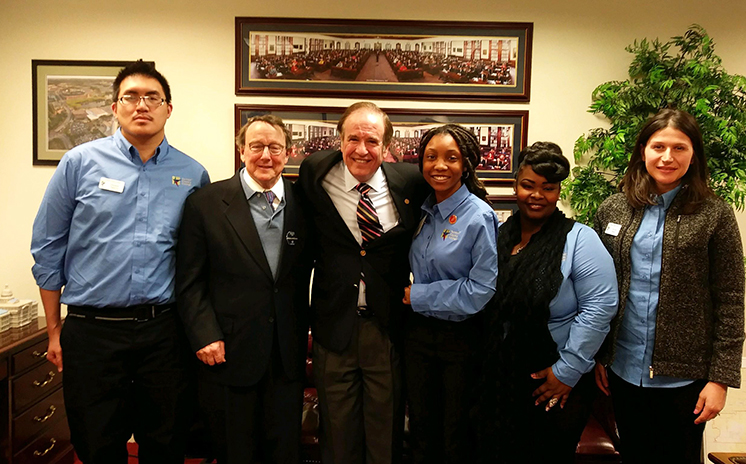 When Tatanya Kisin, professor of Government on TCC South and sponsor of the Student Government Association, emailed her SGA students in November about paying a January visit to the Texas Legislature, she listed all the pluses and didn’t dodge the single minus – the bus for Austin would leave the campus at 5 a.m.

“Within an hour, I got their responses of ‘Yes, I want to come,’” she said. “I don’t think anyone mentioned the early departure at all. They were too excited about going on a field trip to Austin and meeting our leaders.”

Student Thomas Nguyen might not have mentioned the departure time, but it did come as something of a shock. “But it was worth the effort involved in being a leader,” he said, “and things like that means having to be flexible.”

The seven students – Nguyen, Summer Landham, Faith Wiley, Chance McCarty, Jariana Musgrove, Angelica Melendez and Isaiah Thompson – were part of a contingent of 51 students, faculty and staff representing all six TCC campuses. The occasion was Community College Day, sponsored by the Texas Association of Community Colleges (TACC) since 1997 with the goal of bringing students, staff and trustees from around the state to press the TACC’s priorities to legislators representing their home districts.

According to Dustin Meador, the TACC director of governmental affairs, 38 of the state’s 50 community colleges were represented by more than 1,100 students. In TCC’s case the students were joined by Board of Trustees members Bill Greenhill, Conrad Heede and Diane Patrick, herself a former state representative.

Once inside the Capitol, somewhat groggy from having slept most of the way, the students fanned out for their assignments. Some headed immediately for legislators’ offices while others, whose office appointments were later in the day, took a look around the building, which most had never visited.

At 10 a.m. they reconvened in either the House or Senate galleries to watch the sessions, largely ceremonial at this stage. In the House, the delegation was recognized from the floor by Rep. Chris Turner along with Rep. Craig Goldman of Fort Worth.

“It was a great trip,” Nguyen said, “a very educational and developmental opportunity to network and get exposure to politicians. I was able to see different politicians’ perspectives on education and what they actually focus on. He (Zedler) had some interesting views on graduation rates.”

Nguyen and his classmates were ready for the meeting. “They got to the meeting very early and were sitting outside of the office looking at their notes because they had done some research and had questions prepared,” said Kisin, who sat in on the conversation.

Overall, Kisin said, the student feedback was very positive. “I think they enjoyed it and learned a lot,” she said. They realized that there are these real leaders to whom they can ask questions and who are accountable to us as voters. They got a little glimpse of how our Texas Legislature works.”

Nguyen agreed. “I was able to get exposure to how the political world works, and I think that will help me as a leader. Without TCC South I would never have been able to experience it on that level.”

It was an opportunity for the students not only to listen, but also to make their voices heard, and those voices came in loud and clear. “I always enjoy meeting with students from TCC, and I am always impressed by their high level of understanding of the complex issues facing our state and their desire to be part of finding solutions,” said Turner, whose district includes TCC Southeast. “As chair of the House Committee on Higher Education, I especially like hearing input from college students, who are directly impacted by the many of the decisions we make.”

And that, the TCC trustees said, was the whole idea. “We know that our state legislators desire to know the wants and needs of community colleges from administrators and board members,” Heede said. “but what they  really want and need to hear is the individual stories of our students, the ones directly affected by the actions they take. The students provide the ‘why’ answers, the specific reasons behind the importance of continuing to make community colleges the driving force that provides the real answers, the pathways to how anyone can become successful in life despite their beginnings and all the obstacles they may have in front of them. Their heartfelt life stories produce the emotional response and connection that legislators need to take appropriate action.”