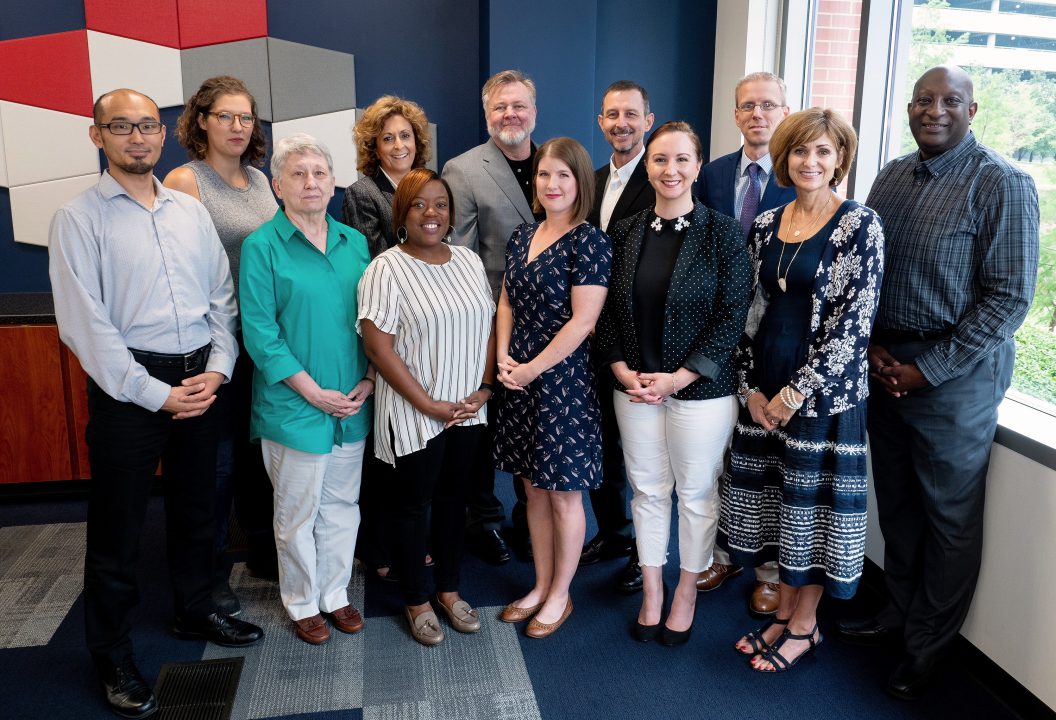 It’s April 2019 and Shereah Taylor is going through withdrawal.

No, not that kind. Nothing to do with what one might smoke, snort or swig. Rather, it’s that conflicted, kind of empty feeling that comes when a very long, but very rewarding project reaches an end.

Taylor, associate professor and coordinator of TCC South’s Teacher Education Program, just ended a six-year odyssey from the Faculty Senate through the Faculty Association presidency to chairing the Joint Consultation Committee (JCC), the faculty’s Collegewide liaison to the administration.

“It’s kind of hard to give it up,” she said. “But I have to because it’s an elected position and my time is over. It’s time to hand it off and let it go.”

But not just right away – not cold turkey. Her calendar still showed a College budget workshop, a Governance Committee meeting and one last Board of Trustees Meeting. After that, the baton passes to Kevin Harper, who knows he has a hard act to follow.

“Oh, gosh,” said Harper, chair of TCC Northeast’s Health and Physical Education Department. “Working with Shereah has been such an incredible experience. She seems to know everything and knows absolutely everybody. She’s very knowledgeable and has been gracious in passing that knowledge on to me. She may have small feet, but those are big shoes for me to fill.”

But what’s next for Taylor? “Oh, I feel I’ll always be connected in some way,” she said, noting that her two immediate predecessors had been asked to take on special projects after their terms as chair. “So, I’m just kind of sitting and waiting, asking ‘Are they going to give me something?’”

Taylor came to TCC South in 2010 as an adjunct after several years as a teacher and assistant principal at the Fort Worth ISD and was hired full time the next year. After a year of “trying to find my way,” she became active in the Faculty Association and was recruited by outgoing senator Jeremey Byrd to run for his position. She was elected, served her two-year term and then was asked to stay on as Senate chair.

Taylor’s ascent through the faculty governance hierarchy shouldn’t have come as a surprise. Her tradition of leadership is woven throughout her résumé – director of this, coordinator of that. And, yes, she was a cheerleader and student council president her senior year at Fort Worth’s Dunbar High School.

It was important to Taylor that leadership positions be meaningful. She didn’t get that impression early on with the JCC, which had been created, albeit somewhat grudgingly, by the College administration in the 1960s and had been largely relegated to a purely advisory role. It wasn’t until 1997 that it met on a regular basis with the Chancellor’s Executive Leadership Team (CELT), made up of those top administrators reporting directly to the chancellor. Even then, the meetings were a matter of the faculty waiting until the CELT finished its own agenda before being allowed in the room to address their issues.

Taylor joined the group during the interim between Chancellors Erma Johnson Hadley and Eugene Giovannini. “There were lots of meetings but not a lot of decisions,” she said, “because nobody wanted to make a decision until the new chancellor came in.”

The experience put her in mind of Thanksgivings as a child sitting at the children’s table. She wondered if the JCC was included just so the administration could say it was and if things would change under Giovannini.

Would they ever! Taylor recalled the new chancellor’s first meeting with the JCC at which they asked him questions. That is, according to their protocol, the JCC chair posed all the questions suggested by the members … or at least he tried to. “At the third question, he (the chancellor) held up a hand and said, ‘Stop. There are 13 of you in this room and one person is asking all the questions,’” she said. When told of the JCC way of doing things, Giovannini said that from then on, the individuals who had the questions would ask them.

That was only the first wave in the sea change to follow. At the start of Taylor’s chair-elect year, she and Chair Steve Smiley of TCC Southeast received an invitation to meet with the CELT. “True to form, we sat there with our hands folded,” she said. “He (Giovannini) started introducing members of the JCC and then said, ‘You’ll notice that the chair and chair-elect of the JCC are here, and they’re not just attending the meeting. They are now members of the JCC.’”

This was news to Smiley and Taylor and big news for the faculty as a whole. “We were asked to make decisions, to drive change,” Taylor said. “It was weird for us and also very different for the faculty back on the campuses.”

The incorporation of faculty into the College’s administrative process didn’t stop at the JCC level. Chairs of committees drafting portions of the faculty’s annual proposal to the administration found themselves meeting with Giovannini and being questioned. They also found themselves working directly with the top administrators charged with carrying out those proposals approved.

It was difficult at first for the newest CELT members to speak candidly in meetings, Taylor said, and it was difficult for the administrators, as well, particularly the campus presidents. “I think at first they were wondering how this conversation was going to go,” she said. “They were talking about things on their campuses that perhaps pertained to their faculty, and faculty members were right there listening.”

Taylor hopes the new policy of inclusion will spur more interest among the faculty in participating in their Faculty Associations, serving on committees, seeking leadership roles. She realizes it won’t happen overnight given the historic lack of participation. The word will spread, she said, but incrementally. “We share all this information,” she said, “but our Faculty Association meetings? We have, what, almost 200 full-time faculty members on South and we might have 40 show up for a meeting. But when we start to have ownership of the work that is going on, I think that will start to change. I definitely believe that we’re in a time of change where it’s not us vs. them any longer. It’s a collective effort.”

Taylor’s experiences as JCC president, getting a global view of how the College works and how the pieces fit together – or don’t – has made her think more about a possible move into administration.  She remembers being asked by her doctoral program advisor about her ultimate goal. “I said, ‘I know I never want to be a middle school principal, but I think I could be a college president,” she said. “I can say I absolutely enjoy the teaching aspect of it. I enjoy interacting with students, but I can definitely see myself moving into a dean’s role.”

She’s not the only one. Louise Appleman, president of the Board of Trustees, has seen Taylor up close for the past two years. “When I sit up there and watch her appear before the board,” Appleman said, “I think I’m seeing a demonstration of the best we have at TCC. I look forward to watching her progress, and I think there are some big things in her future.”