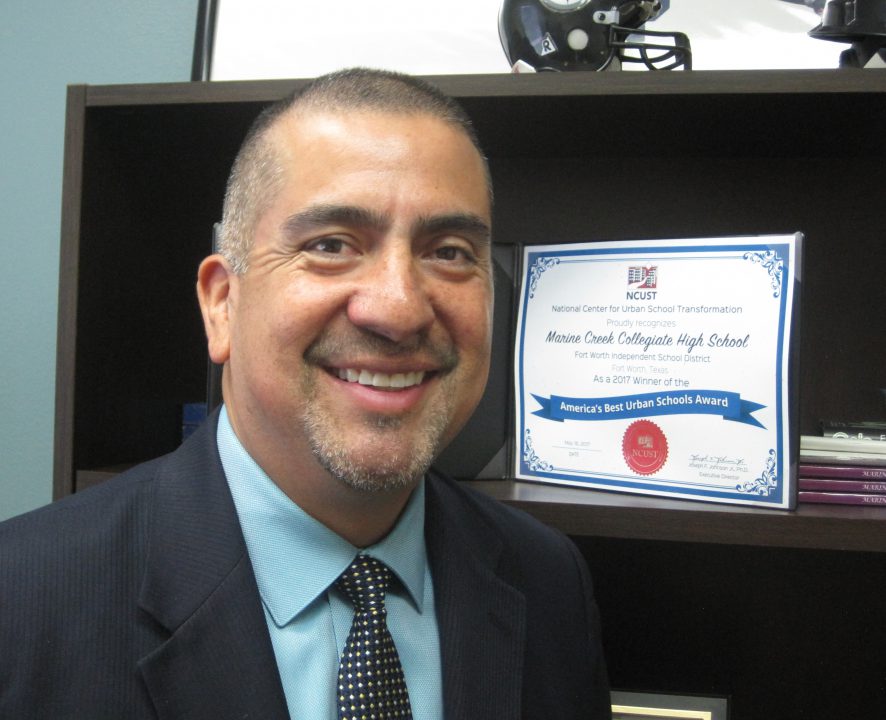 H is for hear – “I’m here to listen to them, to figure out where they are.”

E is for encourage – “As a leader, I’ve got to stay positive.”

L is for love – “I’m about relationships. That’s easy for me. I grew up in a traditional Hispanic family, and we’re huggers.”

P is for prepare – “Prepare them for what? Well, I don’t know. Maybe the next day or the next test. But I’m starting to write letters of recommendation and one of my first questions is ‘You’re a senior. What do you want to be?’ So, it’s planting that seed, asking themselves, ‘Where am I going from here?’”

Fraire knows all about seeds being planted. A high school teacher in his native El Paso saw something in him and urged him to think beyond the local higher education options, then oversaw his application to and acceptance by the University of Notre Dame.

It was a giant leap for Fraire, the 11th and last child of a father who went only through third grade and a mother who dropped out after the eighth. It wasn’t easy. There was some scholarship money, but he still had to work three part-time jobs to make it through.

In 1995, armed with a math degree, he decided to return home and become a teacher “because I wanted to share what I had experienced with the kids of El Paso. I wanted them to know there was something better out there.”

Students in his first school – Cesar Chavez Academy, an alternative campus for kids in the criminal justice system – certainly needed a role model. Fraire displayed his Notre Dame diploma prominently and said to the students, “Look, you can get there, too.”

In 2000, Fraire and wife Francesca, also a teacher, wanted a change of scenery and were snapped up at a job fair by a Fort Worth ISD recruiter. He landed at Carter-Riverside High School, where the principal planted another seed, encouraging him to enter a master’s program at The University of Texas at Arlington.

He spent a year as an assistant principal at South Hills High school, but his parents’ illnesses brought him back to El Paso, where he got his first principal’s position – at Cesar Chavez Academy where he had started 10 years earlier.

A week or so into his first semester, his administrative assistant buzzed in to say a sheriff’s deputy was in the outer office and urgently needed to see him. Fraire feared the worst, but instead experienced one of the best moments in his career. His visitor, who had been a student in his first class, now wanted to thank him “for teaching us and teaching us about life.” Moreover, the lawman, who had been a gang member when they first met, told him that a female student, who had been in the same gang, had earned a math degree and was now a teacher.

“That made it all worthwhile,” Fraire said. “Everything … even all the fights I broke up.”

He and his family – now with three children – moved back in 2010 to Fort Worth where he taught math at Diamond Hill-Jarvis High School and was principal at Meacham Middle School before getting the call to come to Northwest Campus. MCCHS is a polar opposite of Cesar Chavez Academy. The high school graduation rates are at or near 100 percent, and more graduates each year also receive their associate degrees. It has been recognized for excellence by the U.S. News and World Report. Fraire still faces challenges, but of a different sort.

“I find myself in a fabulous situation here,” he said, “but the question is one of how you get an already excellent school to the next level. It’s different here. These kids are just a few years away from joining the workforce – joining us and giving back to the community.

“So, I’m planting those seeds. I want them to find their Notre Dame, whatever that is … their dream, their place, their passion, their love.”

In that respect, the MCCHS students are just like others Fraire’s mentored over the years. They just need a little H.E.L.P.