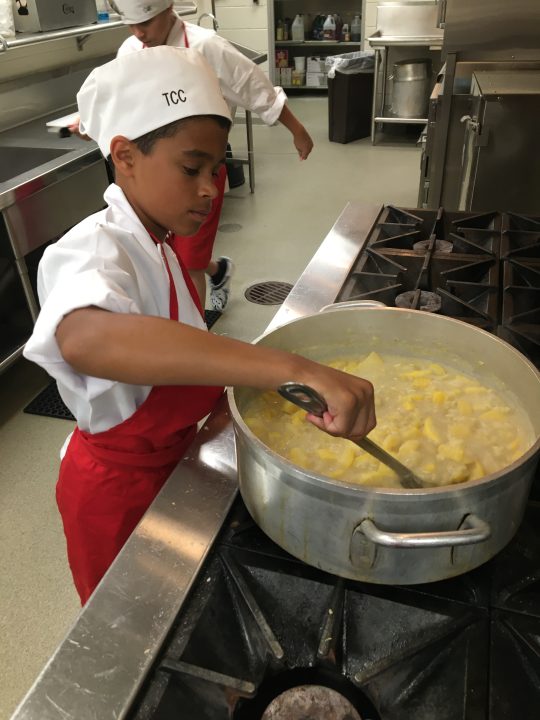 It was, said Nellda Gallagher, “a Lucy moment.”

That’s not “lucid,” as in rational or sane, but Lucy, as with the scatterbrained character made famous by comedian Lucille Ball.

Gallagher, culinary instructor at TCC Southeast, admits coming up with “grandiose ideas,” one of which was having students, using a recipe from her grandmother, make a squash casserole not just from scratch–buying the squash from a grocery store–but using squash raised from seeds.

Seedlings are readily available for purchase, but Gallagher wanted to “know the plant. If you buy them already started, you don’t know where they came from.” Instead, she bought organic seeds and planted them in a biodegradable container that could be transferred intact from a hothouse to a garden once the seeds sprouted.

The seedlings almost didn’t survive the journey from her house to the Southeast community garden. “They looked great when I took them up to campus,” Gallagher said. “I had a class that night, but I thought, ‘Well, my car’s kind of hothouse’ and decided to leave them until after class.”

When she went to retrieve them, however, “they didn’t look so good. They were just slumped over.” She gave them a liberal watering, planted them and hoped for the best. “If these things survive, I’ll be really thrilled,” she thought at the time.

Survive they did, despite a lack of rain and the depredations of “critters”–possums, racoons, skunks and birds. At one point, TCC Southeast Biology instructor Laurie Ertle, who maintained the garden, called Gallagher and told her she had an abundant crop. Gallagher responded, “I do?” and on investigation filled an entire crate. “And it’s been filled three more times after that.”

So, what to do with all that squash? Time for another Lucy moment!

She remembered that the summer College for Kids programs were about to start and that one of them was Culinary College for Kids. “We can give these to the kids,” she thought. “We’re going to do this!”

Even colleague Sherry Sipho, who normally plays Ethel to Gallagher’s Lucy, reeling her in from some of the more bonkers brainstorms, got into the act. She contacted Rex Allen, the kids’ instructor, who was delighted to adopt the project. Under his watchful eye, the youngsters cleaned, prepped, and froze the squash blossoms to be made (according to Allen’s recipe) into a casserole the following week.

But Sipho wasn’t through, enlisting Gallagher to visit one of her classes to describe the project and the history behind the recipe.

“Grandma Helen,” Gallagher said, was Texan to the bone – equally comfortable, she remembers from photos, in a formal gown or in western garb with a snake around her shoulders. She went hunting with her husband to furnish game for the small café she owned near downtown San Antonio. Gallagher would clean the quail and help out with the cooking.

Grandma Helen didn’t care much for fancy ingredient terms. Adding cheese to a basic white sauce was “cheese sauce,” not mornay. And, knowing that Texans loved their potato and corn chips, she would grind them up and put them in her sauce to add both texture and flavor.

After Gallagher’s presentation, Sipho’s students used the recipe to make a casserole, not a bite of which remained at the end of the class.

The casserole remains a staple at Gallagher’s house. “It’s on our table every Thanksgiving,” she said. “We can’t have Thanksgiving without it.”

And she’s more than happy to share the recipe.

Preheat oven to 350 degrees, adjust rack to middle of oven.

In another pan, melt butter and add onion, sprinkle with salt, white pepper and mustard powder, and cook on low until onion is soft, but do not brown. Add flour and cook until flour is absorbed, but do not brown. Add milk, stirring constantly until sauce heats and gets thick. If sauce is too thick, add enough water to thin it out.

Add 1 cup of the grated cheese and stir until melted. Add ½ cup of the crushed Fritos. Finally, add cooked squash and stir to combine. Taste and adjust seasoning as desired.

Place mixture into 2-quart glass casserole dish. Top with remaining grated cheese and Fritos. Bake until bubbly in the center, about 20-25 minutes.