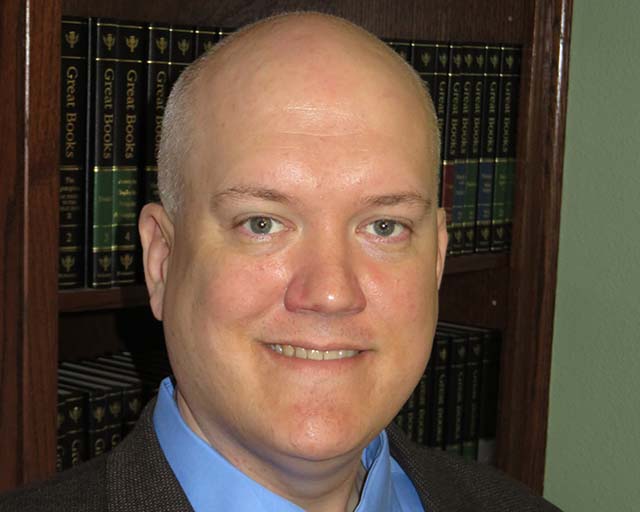 Jason Frawley is someone who loves to tell stories and work with students. This is something his colleagues will tell you enthusiastically.

“From the start, Jason has been an excellent storyteller,” said Mike Nichols, a fellow professor of History at TCC Northwest, a friend, and someone Frawley describes as a mentor during his early years in the department. “It’s one of his greatest assets in reaching students. He performs without a net as well – no notes!”

Frawley is also humble. His humility is evident when you talk to him. It is especially evident if you ask him what it was like to win the Chancellor’s Award for Excellence in Teaching for TCC Northwest this year.

“It was embarrassing,” he said, with a rueful grin. “I don’t like to toot my own horn. I don’t like the spotlight in that way. But it was validating. It’s nice to get the occasional ‘attaboy. It means I’m doing this right.”

While Frawley may not love the spotlight, he has a passion for storytelling. “I have been surrounded by stories my entire life. I have an affinity for stories,” he said. When he was growing up in Georgia, Frawley’s family used to trade stories about family lore. They had ancestors who fought on both sides of the Civil War, and Frawley heard about them while visiting an antebellum home built by one of his ancestors in 1855. That experience, as well as an eighth grade trip to Washington, D.C. that included tours of battlefields in Virginia, sparked a love of history that continues to this day. Describing those battlefield tours, he said, “I’m not big on museums, but there is something about being somewhere where something important happened. You can feel it.”

His love of storytelling goes beyond history, too. He enjoys playing story-based, table-top role playing games like Dungeons & Dragons. He also loves country music. “I like to say that I got my work ethic from my mom and my passion for music from my dad,” he recalled. His father, who was a musician, fostered that love of music in Frawley and his brother. They used to listen to Garth Brooks together and he grew up with a deep appreciation for Harlan Howard’s quote that country music is simply “three chords and the truth.” While in high school, his love of country music and storytelling led him to form a band, an interest and talent that he continues today.

Frawley considered pursuing music as his career, but decided he first needed to get a degree. He ended up attending Georgia Southern University where he majored in history with a focus on ancient European history. He earned his master’s degree at Georgia Southern as well, this time focusing on American History, specifically the Civil War. While working on his master’s degree, Frawley was diagnosed with Hodgkin’s Lymphoma. He underwent chemotherapy while he was taking his graduate courses. Understandably, he considered taking a break after graduation, but TCU came calling with a full scholarship to pursue his PhD. It was an offer he couldn’t pass up.

While working on his PhD at TCU, Frawley started as an adjunct at TCC. After completing his PhD, he started full-time at TCC and has been part of the faculty here for 16 years.

If you ask him what makes him a good teacher, his humility comes back. “I don’t know how to answer that,” he said before pausing and thinking for a beat. He then continued, “I care for my students, and I think they trust me. I try to create a classroom environment they will feel comfortable in.”

He also referenced comments he has received often in student evaluations. He said, “I get comments about my sense of humor and my dad jokes. They ask about my kids, and I am happy to share with them. They tell me I am good at breaking things down, and that I am easy to understand.”

Nichols says this all checks out, “At first glance, one might perceive Jason as an intimidating presence with his height and deep voice, but he is gentle and supportive of his students and colleagues. He is natural and relaxed in the classroom, and his students find him approachable, fair, and empathetic. His dedication to his students and to TCC has made him a vital part of our department and our campus.”

Sonya Brown, Frawley’s dean, agrees “Jason is a thoughtful faculty member and department chair,” she said. “He is innovative, creative, and caring. Without hesitation I would tell you that Jason is an invaluable asset to the Northwest History department, TCC Northwest and Tarrant County College.”