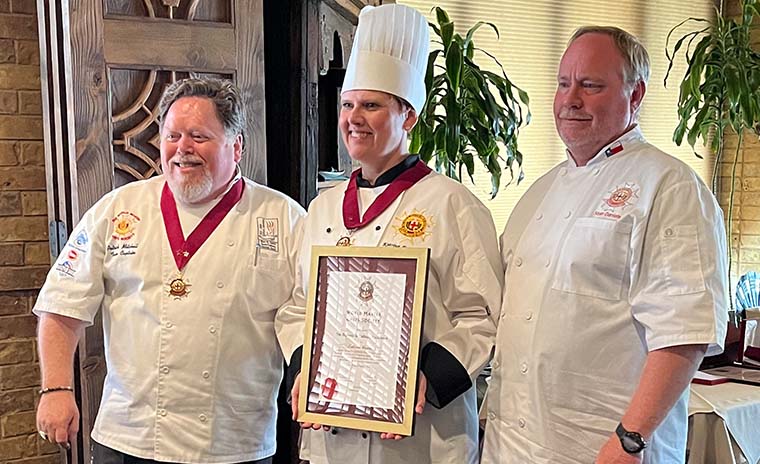 The first thing Katrina Warner wants you to know about her selection as a member of the World Master Chefs Society is that she is not to be called “master chef.” That status, in the United States, is conferred by the American Culinary Foundation on a few (currently 67) chefs who pass a rigorous eight-day exam whereas the WMCS is headquartered and better known in Europe.

The second thing Warner, coordinator of the TCC Southeast Culinary Program, wants you to know is that, irrespective of the first thing, her selection is a really big deal. “There are only seven women in the society. I make number eight,” she said. “So, it’s pretty exciting.”

The first she knew of the honor was in a congratulatory email from Patrick Mitchell, USA Ambassador to the society and president of the USA chapter. She had been nominated, without her knowledge, by Chef Allison Hodges, a colleague who provided all necessary information. The nomination was reviewed by the local chapter, which sent it, recommending approval, to the international headquarters in London.

The society’s mission, according to its website, is “to cultivate a vibrant union of talented professionals who are dedicated to advancing the culinary arts and beyond. We encourage our World Master Chefs to foster their culinary wisdom and creativity within their kitchens and communities and share their global stories to promote the social, educational, environmental and inspirational impact of our industry.”

Warner was inducted into the WMCS along with Michael Smith, executive chef of the Corpus Christi Yacht Club, at an April 19 luncheon at the Via Reál restaurant in Irving. One might have expected it to be a pressure-free celebration for the inductees, but part of the organization’s tradition is that the new members are responsible for planning and preparing the meal, which, instructions from Mitchell said, should be “elevated.”

Warner confessed to being “very humbled” by the honor and a bit fearful of the luncheon. “When you have to cook for this caliber of people, it’s a little intimidating – serving my food to a room full of exceptional chefs,” she said. But she did have some friendly faces among the diners – Southeast President Bill Coppola, Director of Campus Relations Allen Powell and Vice President for Academic Affairs Zena Jackson.

Warner and Smith started drawing up the menu in January and stuck with the restaurant’s Southwestern theme. Her responsibilities included appetizers and the first course. “For the appetizers I’m going to do a citrus mojo shrimp, linguica sausage, and green chili and cheese tamales,” she said the week before the luncheon. “And then our first course will be olote corn chowder with cured bacon.”

It’s not like Warner and Smith had to prepare a four-course gourmet luncheon for about 50 people on their own. Hodges and Southeast Instructional Assistant Nathan Price were part of the kitchen crew along with students Renee Ulrich and Fraz Akhtar, each of whom received a $750 scholarship from the society. Jesus Olivares, executive chef and owner of Via Reál, coordinated the course servings.

But it was one occasion at which too many (or at least a lot) of cooks didn’t spoil the broth. “The members complimented me on my flavor and presentation,” she said. “It was definitely ‘elevated.’”

Certainly, Mitchell thought so, sending Warner a follow-up message saying he “loved the tamales!” and also praising the shrimp, sausage and soup.

It had been a “whirlwind day,” she said, but it wasn’t over yet. “I had to run back to campus afterward to run my 4:30 dining room class to serve our division’s graduation dinner. I am SO glad it’s all over.”