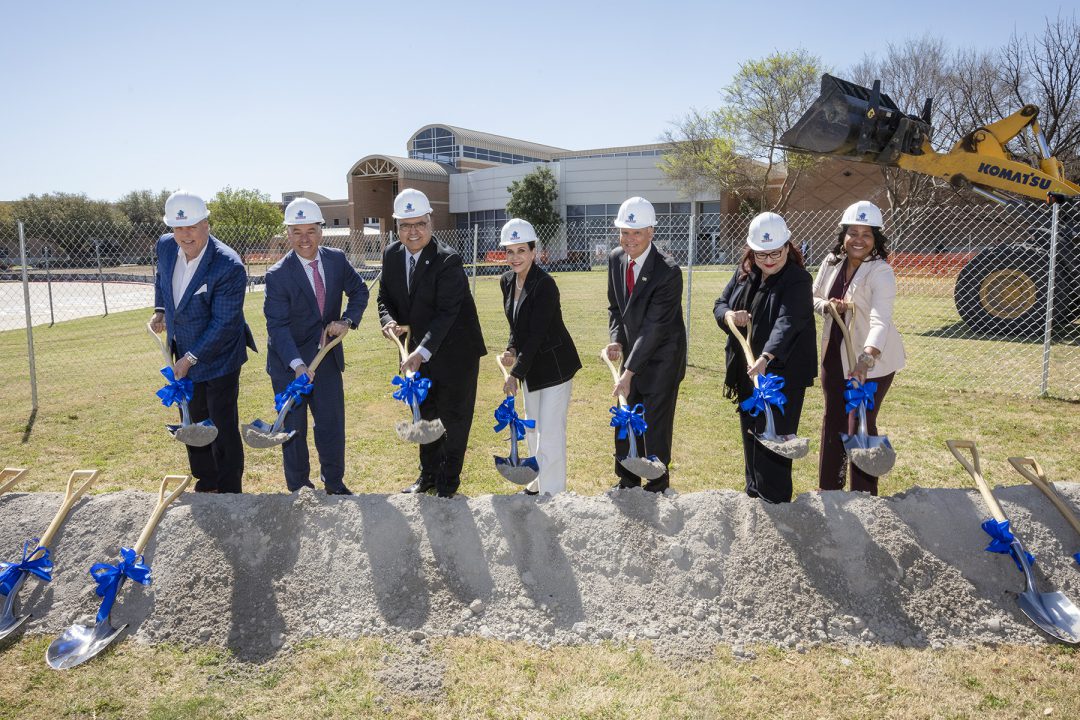 The groundbreaking ceremony at TCC Southeast on April 8 rightfully looked toward the future. Board of Trustees President Teresa Ayala called the event “a celebration of a vision.” That vision that will include two new buildings – one for academics and the other to elevate the student experience – and a major renovation of the eastern wing of the present campus plus the transformation of the Library into a Learning Commons.

But the day was just as much about what Southeast has become than what it will be. The focus was on collaboration as well as construction, relationships as well as real estate. Speakers shared personal connections to the campus and to TCC, but they also paid tribute to its role in that quadrant of Tarrant County.

Texas State Representative Chris Turner (TX-101), whose district  includes the Southeast campus, visualized two aerial views – one at the present and the other when the campus opened in 1976. “This area has changed a lot, and it’s changed for the better,” he said. “It’s grown. It’s much more diverse, and TCC Southeast Campus is the focal point of Southeast Tarrant County.”

Jamea Johnson, representing Southeast’s students, acknowledged that diversity as it exists among her Student Government Association colleagues. “Our officers are Black, White, Hispanic, LGBT, Muslim, Jewish and international,” she said. We all come from diverse backgrounds, and we’re all working toward different futures.”

County Commissioner Devan Allen recalled attending Southeast and Northeast simultaneously, shuttling back and forth in a “tote-the-note car I bought on Division Street.” But years later, when needing a COVID testing facility in her district, her first and last call was to Southeast.

Marcelo Cavasos, superintendent of Arlington ISD, spoke of working with Campus President Bill Coppola to create the city’s first early college high school. “We now have two early college high schools and one P-Tech program,” he said. “We’re opening another P-Tech program next fall, and we come to the same door – TCC – because of its excellence, to partner to with us to provide these opportunities for our students.

“And, quite frankly, we’ll never know the impact that we have – that you have – on young people, their lives, generations and generations because you change one life in education and you change a family, a generation.”

And Acting Chancellor Elva LeBlanc, whose history at TCC goes back to her student days at Northeast, said that the day’s celebration spoke, not only to the students, but also to “the support from the community, whose citizens always have understood the key role that Tarrant County College plays in preparing the future workforce and economic development of the region.”

After the final speech and ritualistic dirt shoveling, attendees gathered in the Ballroom, glad to be out of the chilly wind while they noshed on pastries and hors d’oeuvres and sipped customized, non-alcoholic “mocktails” whipped up by Culinary Arts students. Among a host of well-wishers stood Judith Carrier, who emcee Coppola had earlier called “the mother of Southeast” and whose dynamic leadership fueled the campus from its inception to its status as a treasured community partner.

“This (fulsome praise from community leaders) means that things are going so well here,” she said. “First and foremost, we are part of the community, and the community loves what Tarrant County College does and what it provides for students. More than that, however, is the diversity of the campus that makes it magnificent, with the leadership coming from so many nationalities, so many languages, and they’re working together the way I wish the whole world would work together.”

The TCC Southeast project, budgeted at $142 million, is part of an $825 bond program approved by Tarrant County voters in November 2019. Work is underway on construction documents, with documents for Building 1 and Building 7 being completed in February 2022. Preliminary work began in March, with a projected completion date of September 2024.

Work planned outside the primary campus footprint, while not as head-turning, will still be welcome. The six temporary structures to the east will disappear, and the gravel parking lot will be expanded and paved, helping to alleviate a problem that has existed at Southeast since it opened. Coppola acknowledged the chronic parking shortage when he told the audience that the day’s theme “Building Opportunities for Tomorrow” was selected only after rejection of an earlier effort – “Bad Parking Today for Opportunities Tomorrow.”