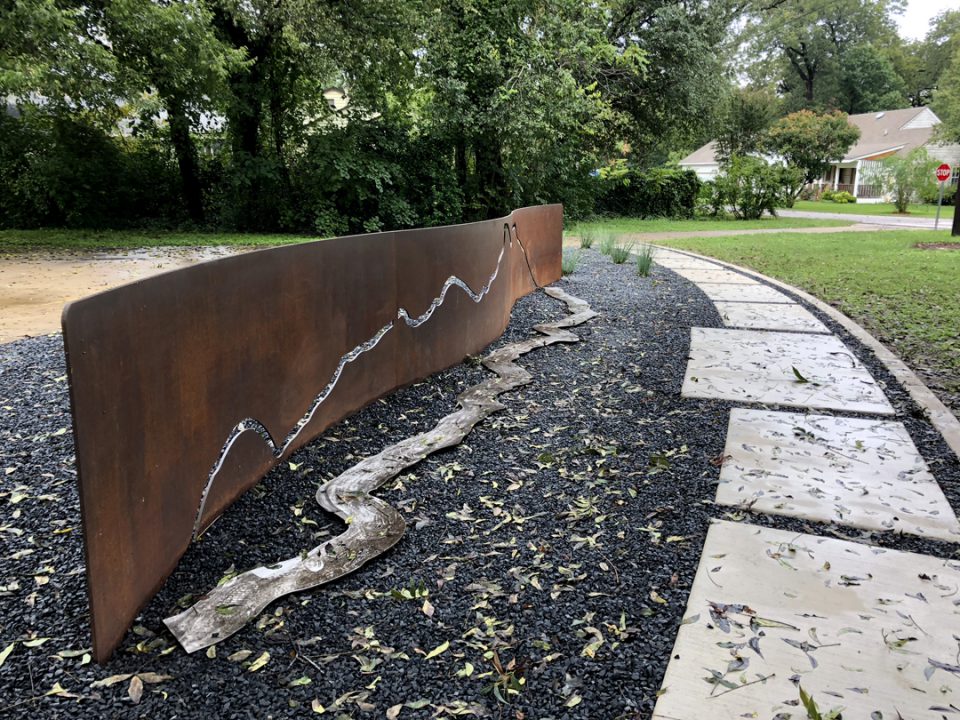 Christopher Blay, inspired by his education at TCC, achieves wide-ranging success as artist and curator

You might say it was Christopher Blay’s job as a delivery driver that took him to Tarrant County College. It was the ’90s, and Blay was making deliveries for a local photography lab. His work didn’t require any campus drop-offs, but Blay’s desire to learn more about the art of taking photographs—an interest sparked by his work—led him straight to TCC Northeast.

Blay, who was about five years out of high school at the time, enrolled to study photography. What he found on campus was an affordable, quality education, as well as the inspiration for his life’s work.

TCC was quite literally a world away from Blay’s roots; he was born and raised in Liberia before moving to North Texas as a teenager. He’d always been a creative person, but with elementary school art classes and pre-teen music lessons behind him, artistic expression wasn’t especially on Blay’s radar. That of course changed when he took that job as a photo lab delivery driver, transporting negatives and prints to photographers throughout the area.

Even when Blay enrolled at TCC, he was thinking more about his developing passion than about a profession. His career goals came into focus as he studied under the direction of professors Richard Doherty and the late Peter Ferresten. “They were my formal introduction to the visual arts,” shares Blay. “My desire to pursue art [as a profession] really came out of my education at TCC. It was there that I made that decision. [Doherty and Ferresten] prepared me so well for a career not only in photography but in all the visual arts.”

Doherty, emeritus professor of photography who taught at TCC for more than 30 years, easily recalls teaching Blay. “He displayed a singular, unique perspective, even in my beginning Photo I class,” Doherty says, adding that Blay’s talent and artistic insight only grew. “Chris was always engaging and willing to take risks with his assignments. He was also very good in critiques—verbal, perceptive and fully tuned in. He was a popular guy to boot.”

And a busy one. When Blay enrolled at TCC, he was working both as the photo lab delivery driver and as a warehouse hand. “There was a semester or two when I didn’t have a car, and I had to wake up at 5:30am, take two buses, and walk a mile and a half on roads without sidewalks twice a week,” Blay remembers. “But I knew that education was my path to success, so I persisted and persevered.”

His determination paid off. It was during his time at TCC that Blay’s work was first exhibited professionally. “It was at a coffee shop at Sundance Square,” he says. “I was a valet at the Worthington hotel, and the coffee house manager allowed me to mount an exhibition of photographs in the shop. It was also where I sold my first work of art. $250 for a black-and-white photograph of the metal frame of Bass Hall under construction. My manager brought me a check from the anonymous buyer, and I was hooked!”

Blay went on to earn his Associate of Arts in Fine Arts from TCC in 1998. A few years later, he continued his education at Texas Christian University. With the courses he had completed at TCC transferring to TCU, Blay was able to complete his Bachelor of Fine Arts in Photography, with a minor in Art History, at a dramatically lower cost.

His higher education experiences, along with his determination and creativity, positioned Blay for a flourishing career. In addition to his work as an award-winning professional artist, he has served as a curator, art competition juror, news editor for a respected online art magazine, critic, writer and lecturer at colleges and universities across Texas; Blay also has worked with museum education programs to create art projects and workshops for students. He even came full circle, returning to TCC for a decade as the instructional associate in charge of curating the art gallery at the Southeast Campus.

Today Blay is chief curator for the Houston Museum of African American Culture, responsible for organizing exhibitions, advising the museum on its art collection and engaging the community. The museum has connections with colleges and universities in the Houston area, and Blay hopes to again share his expertise and wisdom with students. He considers all his time with young artists extremely valuable: “It is a unique opportunity to talk with students about the possibilities for success as a visual artist.”

While many people think of the arts as a particularly tough way to make a living, Blay sees things through a different lens. “The fine arts [field] is not much different than any other profession,” he says frankly. “No matter your path, the rules still involve hard work, perseverance, dedication and a little bit of dreaming. You have to have a vision of what you want and stick with it.”

Clearly, Blay has stuck with his vision. His art is currently part of the Amarillo Biennial exhibition at the Amarillo Museum of Art, and he recently had a solo exhibition in Austin. Blay’s work also has been shown at the Center for Creative Connections at Dallas Museum of Art. Dallas’ Coombs Creek Trail is home to his steel sculpture Dindi (for Annibel), which he created as a memorial to his sister. His work for Fort Worth’s East Rosedale Monument Project will be installed in 2022.

Doherty says Blay’s accomplishments amaze him. “As an educator, there’s no richer reward than to see a person with Chris’ obvious gifts achieve such personal and professional success.”

For Blay, it’s all about the deep sense of fulfillment his work gives him. “We all seek purpose and meaning and reasons for getting up in the morning,” he notes. “Mine is art.”

Explore visual arts and photography careers and programs on the College’s website.