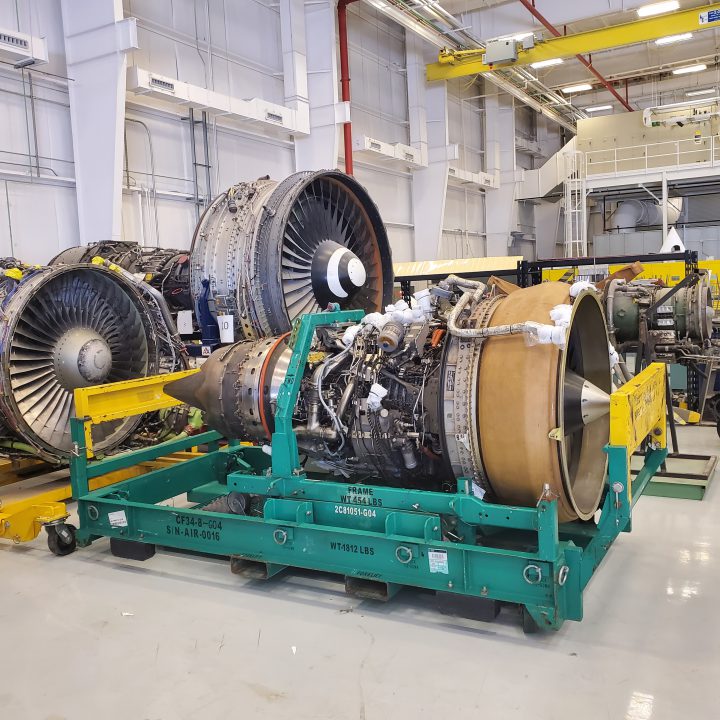 TCC’s Aviation Maintenance Program had both a large high-bypass turbofan engine and small one. Completing the trifecta is a CF34-8E that arrived in late August as a donation from General Electric, the manufacturer.

“We were looking for one in the middle,” said Clint Grant, dean of the Aviation, Business and Logistics Division at TCC Northwest. “So now we have the whole set. It may look like an excess, but when you have 15 to 25 students in a class, the more you have, the better.”

The donation resulted from a tip from Michael Kuban, formerly a project manager for TCC’s 3 goals-8 principles project and now a project management consultant in Dallas. Kuban became aware that GE was looking to donate four CF34-8E engines to educational institutions.  He called TCC Vice Chancellor Reginald Gates, who informed both Grant and Executive Vice President for Advancement Kristin Bennett to start the process.

The CF34 was first produced in 1993 and was developed from GE’s TF34 military engine. It is now used on a wide variety of aircraft, both cargo and passenger. Grant said the CF34-8E model has many uses, including mid-size commercial aircraft such as those used by carriers like American Eagle.

Grant said that while most donated engines have been overhauled to the point where they’re no long cost effective, the one coming to TCC had been a test engine. “GE had used this engine in a way that it may have intentionally exceeded some of its design parameters,” he said.

How the engine runs, however, won’t be TCC’s concern. “We don’t take these apart and run them,” Grant said, “but we do get into how to inspect them and some of the type of inspections that they (the student) will be doing in the field. And the more examples of engines you have, the stronger your curriculum.

The easiest part of the donation process was the actual delivery. “Since we’re right here at Alliance Airport,” Grant said, “getting it to us was pretty easy.”

To learn more about supporting TCC’s programs through equipment and other contributions, contact Kristen Bennett at the TCC Foundation, 817 515-5277. A list of TCC degree and certificate programs is at https://www.tccd.edu/academics/courses-and-programs/programs-a-z/.