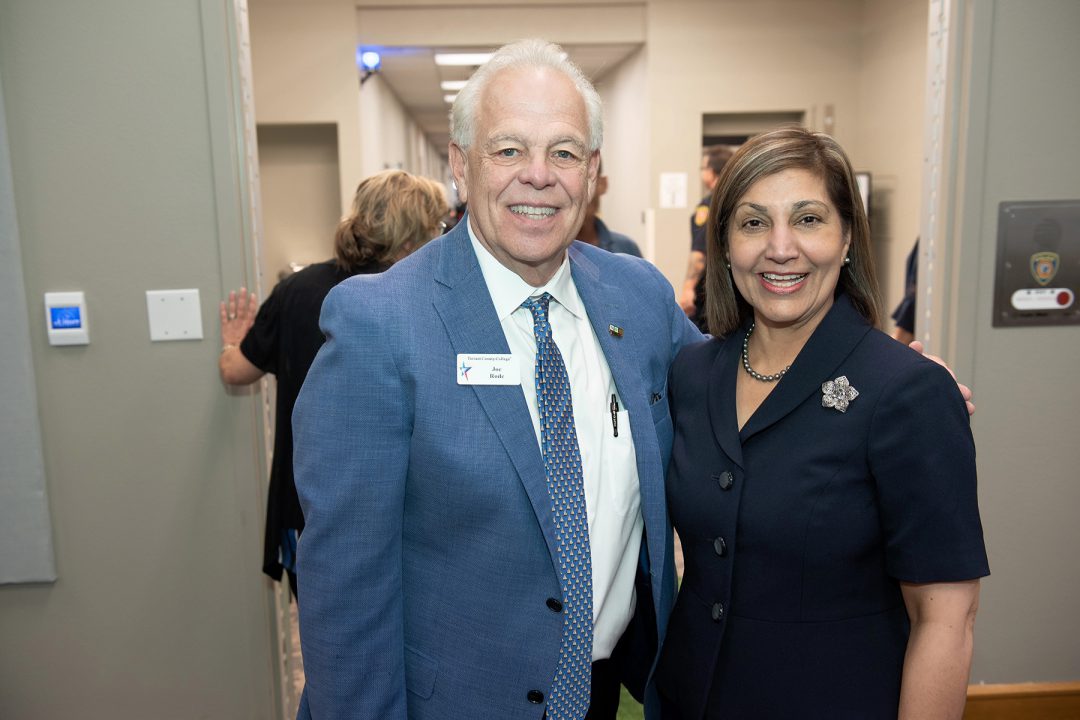 It was late October, and Joe Rode had been retired 54 days. But TCC, where he served 47 years, just wouldn’t let go.

“My dreams are all about TCC,” he said. “Last night [in my dream], I was there and seven or eight people were asking me questions, and there was a line of about 300 people. Then I saw that Judith Carrier (former TCC Northwest president and Rode’s longtime mentor) was down there in line.”

He went to ask what she needed and was told that he had called and invited her to lunch that day. He protested that he hadn’t called and then mercifully woke up. “I guess,” he said, “a psychologist would interpret that as ‘I can’t keep up with everything.’”

Indeed, the scope of his responsibilities as vice president for student development services at TCC Northwest was so broad that it became apparent only when the campus leadership began to divvy them up. “He was involved in so much – projects, committees,” said Michelle Gasca, his administrative assistant. “Some of them are being reassigned over here; others, over there. There’s no way one person could replace him.”

How much will he be missed? “Where do I start?” said Director of Counseling Lily Covio-Calzada. “He did so much, but what I’ll miss most is the calmness he projected, an assurance that things were OK.”

The workload was certainly a factor, Rode admitted. “I enjoyed the job,” he said, “but there was just so much – CARE Team, Code of Conduct, Principle work, off-campus meetings – all in addition to your campus job. I didn’t think I really wanted to work that hard at 70.”

Then, too, he felt a subtle change in the College climate as it grew ever larger, more complex and, at times, impersonal. “I’m kind of an old-school guy,” he said. “I’m very purposeful, a very relational leader. I’m very affiliative, supportive.”

A third factor was his healthy retirement portfolio. Repeatedly asked by others, including his financial adviser, why he was still working, his stock answer was that he enjoyed the job. Eventually, however, he began to ask himself the same question. “And it became harder for me to justify it,” he said. “I guess I had worked myself to the bone after 47 years.”

That almost-half-century journey began when, after earning a master’s at the University of North Texas, Rode applied at Texas’ community colleges – all 41 of them at that time. “And the last one I applied to was TCJC (as it was then),” he said. “I was living in Dallas, and somebody told me that Tarrant County wouldn’t hire you if you live in Dallas County.”

He started in 1972 on TCC Northeast as a psychology instructor and counselor for the Basic Studies program – “kind of a TRIO program for underprepared students.” The quality of his work and his strong work ethic caught the eye of Carrier, then the campus director of special services. When Carrier was named dean of student development service (also as it was then) at the new TCC Northwest, she casually asked Rode if he’d be interested in accompanying her as director of counseling. He said just as casually that he “sorta was” and shortly thereafter, over Tex-Mex at El Fenix, she said she was interested in him and asked if he was interested in the job. “I said, ‘Oh, yeah,’ and that was it – no committee, no matrix,” he said. “Those were different days.”

In 1996, when Carrier moved to TCC Southeast as president, Rode had a chance to tag along again, but chose to remain at Northwest in Carrier’s former post as dean. “I stayed, and that turned into a dream job for me,” he said. “Working with Elva (campus president LeBlanc, as she was then) was a dream.”

Rode and LeBlanc had both been on Northeast when LeBlanc was a student there. “She says that once, when she came in for advising, I was there, “ he said. “I don’t remember it, but I still tell the counselors to be nice to every single student because they may be your boss someday. But she was always very supportive, and so is Dr. Blankenbaker.”

Zarina Blankenbraker, the fifth campus president Rode has served, was quick to acknowledge his contributions. “Dr. Rode served TCC selflessly for 47 years in various roles,” she said. “He was committed to ensuring we created a caring community focused on taking care of one another and those who entered the portals of this College. He modeled this by serving as co-chair for the TCC District original Care Team Task Force in 2013 and continued to provide leadership to TCC’s Care Teams up to the very day he retired.”

So, now what? “Well, I’ve played golf five weeks in a row. Joined a men’s golf group of mostly retired guys,” Rode said. “And Dr. Bud Littlefield (a Dallas-based psychologists) wants me to talk about a consultation group he sponsors. And then I still have my private practice offices in West Fort Worth and Bedford.”

Is TCC still in the picture, apart from nocturnal visions? “Elva, bless her heart, said to me, ‘After you rest up a while, I have about 90 projects I think you’d be good for,’” he said. So the answer is a definite maybe, but meanwhile, that rest sounds pretty good.