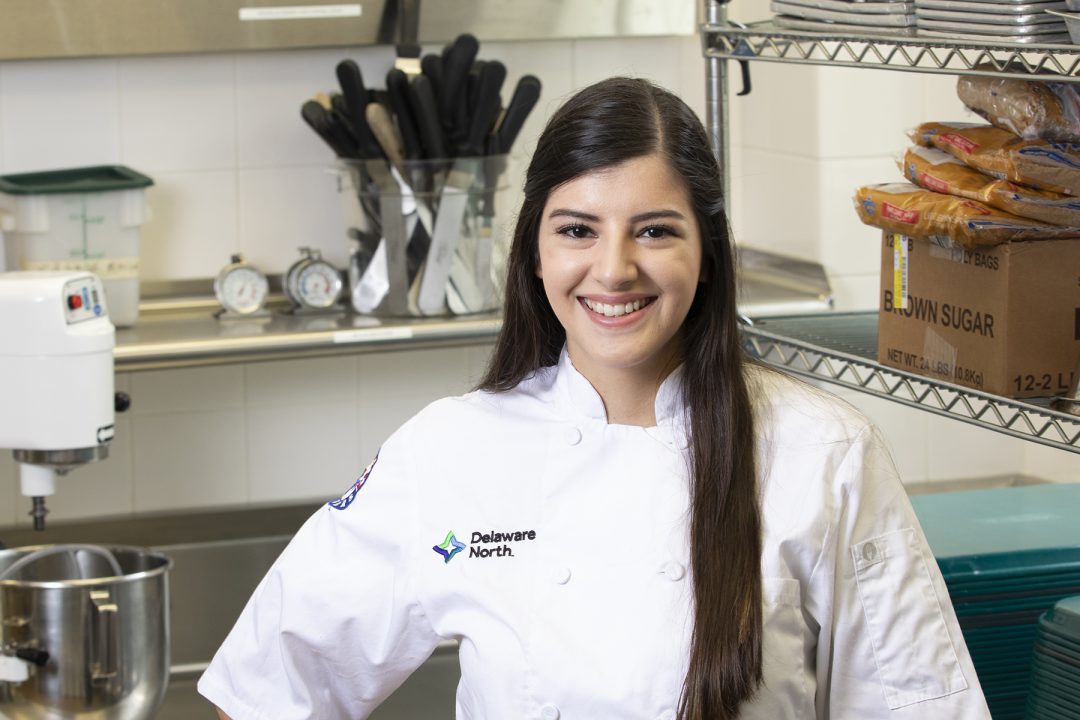 Alma Jauregui graduated from Tarrant County College with her Associate of Applied Science in 2018—but she began preparing for her career as a culinary professional many years before she enrolled at TCC.

“As a little girl, I was always in the kitchen helping my mom in any way I could while learning traditional Mexican recipes,” recalled Jauregui. “I developed a love and passion for food, and I knew I wanted to pursue that area as I got older.”

Jauregui initially planned to attend a culinary school in San Antonio but found it would be too expensive. Her sister recommended community college, and in TCC, Jauregui found exactly what she was looking for: a respected program accredited by the Accrediting Commission of the American Culinary Federation Education Foundation; highly experienced, award-winning professors; top-notch kitchens and equipment; and affordability. She enrolled in fall 2016.

While Jauregui was quiet at first, TCC Culinary Arts faculty immediately recognized her talents and drive to succeed. She quickly distinguished herself as a leader.

“Alma had great dedication to the classes I had her in,” said Chef Katrina Warner, program coordinator and Culinary Arts instructor. “She was focused, asked questions and did very well.”

Jauregui credits Warner and Chef Alison Hodges, another Culinary Arts instructor, with taking her passion to a professional level.

“They both made learning enjoyable and memorable,” she said, adding in true foodie fashion that she remembers “Chef Warner’s chicken fabrication demo and Chef Hodges’ sugar pulling demo as if they were yesterday.”

In addition to developing her technical abilities, TCC gave Jauregui other skills essential for a successful culinary career.

“Time management and planning are really important, because we need to ensure that the food is prepared and ready in a timely manner,” explained Jauregui. “In my classes, I really became more aware of ensuring everything was done before service.”

“She would set time goals for herself and saw how some tasks could be combined to cut down on time and steps,” noted Hodges. “Alma truly has a natural talent for this business.”

“Alma is meticulous and has great attention to detail,” Warner said. “She strives for excellence and does not settle for mediocrity.”

Jauregui returns the praise, sharing that Warner and Hodges “both pushed me out of my comfort zone, not just in the kitchen, but also especially when it came to leadership, volunteering and even facing my fear of public speaking, by encouraging me to give a speech at our graduation dinner.”

Even before Jauregui earned her diploma, she was already making her mark in the industry with Delaware North, a global leader in hospitality and food service management. Since 1994, the company has served as the hospitality and retail partner at Globe Life Park, and now the new Globe Life Field, home of the Texas Rangers. Delaware North also has a comprehensive partnership with TCC’s Culinary Arts and Hospitality Management programs; the company donates scholarships, hosts students at the ballpark, provides training opportunities and participates in job fairs and other recruitment opportunities.

“The Globe Life Park executive chef, HR director and others from the ballpark were on campus, and I applied. The rest is history,” Jauregui smiled.

“I remember meeting Alma on Opening Day of 2017,” said Philip Wheatley, food and beverage director for Delaware North Sportservice. “She was hard at work serving our guests in the Jack Daniels Club. I was struck by her friendly demeanor and work ethic. Opening Day can be strenuous for our culinary team, as we are serving Rangers ownership and executives along with national, state and local dignitaries, among others. However, Alma handled her job with ease and took care of all our guests with style and professionalism.”

She worked part time for two seasons in Globe Life Park’s Jack Daniels Club while completing school. After Jauregui graduated (with honors), Delaware North hired her for a full-time role. She is currently working with the corporate pastry chef to prepare for the opening of Globe Life Field, also in Arlington.

“I’ll be working in the pastry kitchen, baking desserts for the whole stadium—including the restaurants, concessions, suites and catering events,” she explained. “I will be cranking out cheesecakes come next March!”

Wheatley says Delaware North knew that with Jauregui’s affinity for pastries and baking, the new position would be a perfect fit.

“Alma takes what she learned at TCC and applies it to her job on a daily basis,” he said. “We see Alma being a very important part of the team, and we are excited for her future with our company as she continues to grow her career.”

Jauregui has dreams of becoming the pastry kitchen supervisor and eventually a sous chef and beyond. She can’t imagine working in any other field.

“For me, food connects people, so this is all really rewarding,” Jauregui said. “I always think of the saying ‘Do what you love and it doesn’t feel like work.’”

“I can’t even express how proud I am of her,” Hodges said. “When I first met Alma, she was so shy. Now I see a confident young woman who is ready to take on the world.”

This is the second feature in the College’s “On the Move” series, highlighting the accomplishments of TCC alumni.

TCC offers an Associate of Applied Science in Culinary Arts along with certificates in Culinary Arts, Baking & Pastry and Catering/Private Chef. Katrina Warner, culinary arts program coordinator, most recently was named 2019 Educator of the Year for the Dallas Chapter of the Texas Chefs Association. Alison Hodges, pastry chef instructor for TCC’s program,  received a 2019 Chancellor’s Award for Exemplary Teaching and earned a bronze medal and 2nd place overall in the 2018 American Culinary Federation Competition. In addition to helping students hone their talents in the kitchen, the chefs and other instructors teach principles of communication and nutrition as well as technological skills. Graduates are well prepared for direct entry into a career in commercial food preparation or transfer to a four-year university or culinary school. TCC offers the only comprehensive program of study in Tarrant County. Visit the Culinary Arts webpage for more information.