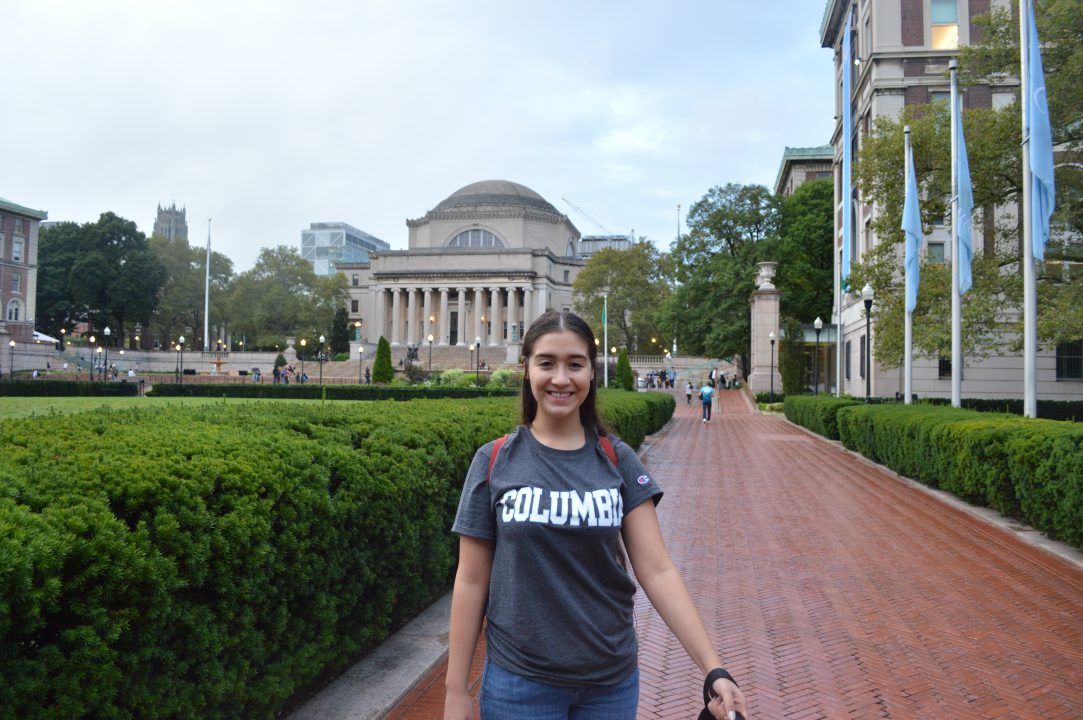 Sarah Perez had a simple plan for college: go to her classes, get her grades and graduate, while keeping as low a profile as possible.

“I’d always been the type of student to sit in the back and observe, keeping any questions or comments I had to myself,” revealed Perez, who enrolled full time at TCC in fall 2017. “I think I lacked the confidence in myself to believe I could leave a mark.”

She easily accomplished the first three goals. But when it came to the final part of her plan—to keep a low profile and not really engage with those around her—Perez achieved the opposite. She ended up having a significant impact at TCC, and TCC had an equally significant impact on her.

“At the end of the day, you’re in college for you, and you truly will get out of it what you put into it,” Perez said.

Her college plan changed one day while sitting in her Composition II class at TCC Trinity River.

“I noticed that nobody wanted to say anything, and that makes class insufferably boring for everyone,” Perez recalled. “So I raised my hand.”

The once-quiet student “revealed a spiky and impressive intelligence while displaying a commanding classroom presence,” Anderson said, noting that Perez continued to shine in the weeks and months to come. “She always got involved and had something substantive and intellectually challenging to contribute.”

At first, the experience was a bit daunting. Perez wasn’t sure she would be as helpful as she wanted to be. With the support of Schrantz, TCC Trinity River Supplemental Instruction Coordinator Colleen Fitzpatrick and her fellow SI Student Leaders, Perez quickly discovered the best ways to have a positive impact on those in the class.

“In her sessions, she was patient and made sure the students felt comfortable. Sarah would go above and beyond to help,” said Fitzpatrick. “She has a knack for connecting with students of all ages, which is incredibly important when working with our diverse student population.”

The program had a profound effect on Perez.

“SI was one of the best things I have ever done, and I never would have expected that going into the experience,” said Perez who went on to serve, as an SI Student Leader for three semesters. “It’s a very special program that really works, especially for those who want a chance to ask questions in a smaller group setting. The feeling of being helpful was so rewarding to me. I realized that it helped me to become a better student too, and it helped to shape my own career goals as well as how I look at education as a whole.”

Anderson, the professor who recommended Perez for SI, also served as faculty advisory for Sigma Kappa Delta, the English honor society for two-year colleges. Perez joined the organization, and with the encouragement of those around her, eventually ran for an officer position, becoming the chapter’s president. Her Sigma Kappa Delta involvement gave Perez new academic experiences and connected her with other like-minded students as well as additional faculty mentors. Theresa Schrantz, associate professor of sociology and psychology at TCC Trinity River, met Perez after delivering the keynote address for a Sigma Kappa Delta induction ceremony.

“Sarah is very personable, intelligent and articulate,” said Schrantz, who added that Perez’s years at TCC helped the student recognize her own abilities. “She was given opportunities to excel and to enhance her skills, and she was encouraged to pursue her dreams and goals.”

One of those goals developed over time at TCC. Perez initially enrolled with the intention of accumulating some college credits before transferring. That changed as she became immersed in her classes and campus life.

“As I kept going, I felt that it would be important for me to complete something before moving on to the next step. So graduating became my goal,” explained Perez.

She also began looking ahead to the next chapter in her education: a four-year university. She had become interested in Columbia University during high school and, for the better part of a decade, it had lingered in her mind as a dream.

“With the experience I had at TCC, I knew that it was worth trying to make it a reality,” said Perez.

She planned to complete her application materials during winter break, prior to her final semester at TCC. Everything derailed on Christmas Eve. Perez was in a serious car accident and broke both bones in her right forearm at the wrist, and smaller bones in her knuckles and fingers of her right hand. Instead of working on her Columbia application, she spent her break in the hospital, at doctor appointments and, ultimately, having surgery.

“Although I am left-handed, I knew that using a computer to fill out my application and take the online entrance exam, as well as typing my essay was going to be a big challenge. I thought that my chance to apply to my dream school could be ruined,” she recalled. “How could I apply right after surgery, when even getting dressed was a challenge, and while attending class at TCC, going to physical therapy and working in the SI department?”

Still, Perez remained focused. Her family helped her get to campus since her car was totaled in the accident. Carol Lattimore, an adjunct professor of English, helped Perez type the first draft of her application essay.

The slow, hard work paid off the day Perez received her acceptance from Columbia.

“When I opened the link for the admissions decision, I didn’t even make it through the first sentence before my jaw dropped,” Perez remembered. “It was such an overwhelming feeling. I read it over and over and kept checking the name on the acceptance notice to make sure it was really for me.”

It was. After earning her Associate of Arts at TCC in May 2019, Perez packed up for New York City and her new university. She is the proud recipient of academic scholarships, which she says were key to achieving her goal.

TCC also played a vital role in getting Perez where she is today: a junior sociology major at Columbia, with plans to go on to graduate school and one day implement SI-type programs in other colleges across the country.

“Things that are taught in TCC SI sessions are being taught to students at Columbia, and because I had that experience at home, I’m one step ahead in the big city,” said Perez. “TCC prepared me for my transition to the Ivy League by giving me a place to learn. It gave me a place to be involved and equipped me with the knowledge and skills I would need as a student at Columbia.”

Perez is not the only one who benefited from her years at TCC and her engagement in classes and on campus.

“TCC provided Sarah a lot, but we were also lucky to have her here,” said Anderson, who saw Perez’s potential for greatness in his Composition II class two years ago. “Wherever she ends up, she’s going to do amazing things.”

This story is the first in a series highlighting where TCC alumni are today.