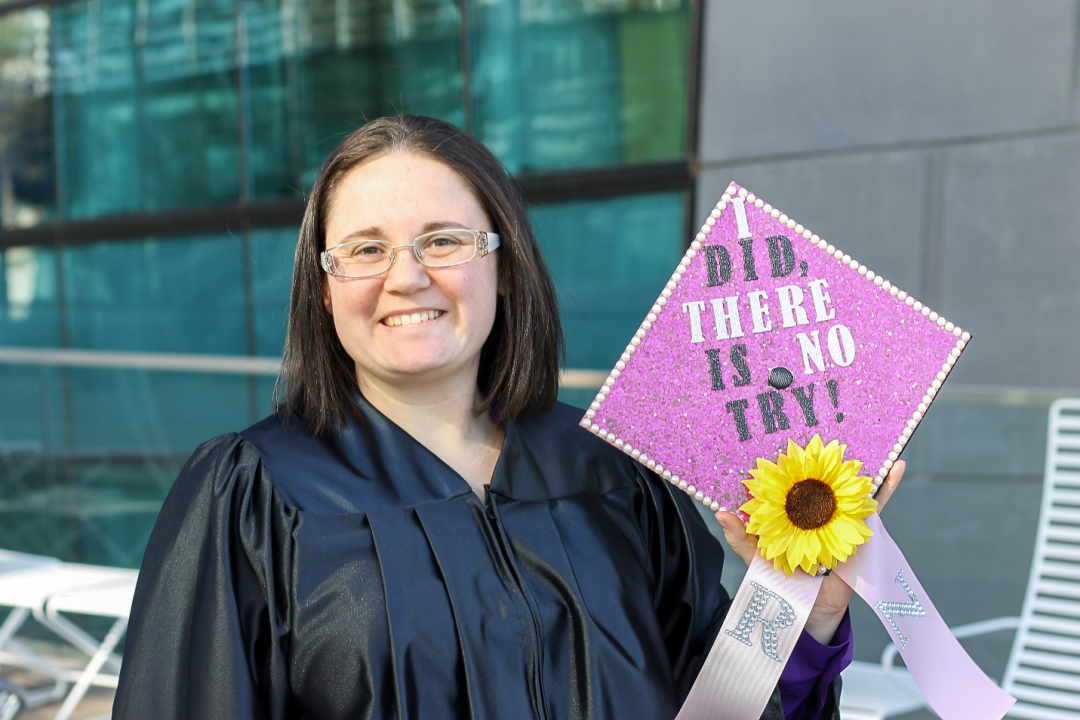 People who know Tarrant County College graduate Palma Savala describe her in many ways, including “committed, caring, intelligent and thorough.” Those qualities are on full display in Savala’s daily interactions, both as a nursing student and as a patient care technician at Methodist Mansfield Medical Center.

“Palma positively impacts patients in ways they may not even realize,” said Tonya Tippens, Methodist Mansfield nurse manager and Savala’s supervisor of nearly nine years. For example, “When providing orientation for a new hire, Palma found a spot on an IV machine cord that still needed to be cleaned. The new hire thought it wasn’t a big deal, but Palma explained that it would be a big deal to a patient. If the patient saw a spot on the cord, what would she assume about the entire machine? Palma knows that every detail is important in Methodist Mansfield’s commitment to provide the highest quality of care. She notices everything and is a great communicator. Palma will be an excellent nurse.”

Savala is well on her way to that goal. In May 2019, she received her Associate of Applied Science in Nursing, with plans to take the National Council Licensure Examination for Registered Nurses (NCLEX-RN) in June. This fall, Savala will proceed to Texas Tech University, where she will enroll in the online Bachelor of Science in Nursing program.

The road to these accomplishments was not easy for Savala, a Grand Prairie native who was the first in her family to earn a college degree.

“I knew that with higher education I would be able to do things for my family that weren’t an option for us growing up,” Savala said, noting that her loved ones were very supportive. “All parents want their children to achieve more than they did. My dad always told us that our education is the most important thing you can get that no one can take away from you.”

Savala’s affinity for helping others drew her to a career in health care. One of her best friends, who studied nursing at TCC, told Savala she should enroll in the program. Savala began her pre-nursing coursework, but she wasn’t able to progress as rapidly as she planned.

After her father suffered multiple heart attacks and doctors were unable to place necessary stents, he underwent open-heart surgery. While he was in the operating room, Savala distracted herself with schoolwork. During his recovery, however, she had to slow down her education.

“I took lighter semesters so I was able to help out during that time,” Savala said. “I took my mom up to the hospital since she does not drive that far. I would be the one talking to the hospital staff and letting my family know what was going on. I would take my dad to his follow-up appointments.”

The experience reinforced Savala’s love for her chosen field.

“When I was watching the nurses care for my father, the calling was even stronger for me to continue my education to be a nurse,” she remembered.

Savala persevered through five years of pre-nursing classes, and at the age of 29, she officially entered nursing school at TCC Trinity River East Campus. the difficulties were not over. Her husband’s mother was diagnosed with two types of breast cancer. Savala was there to provide support and answer the questions she could, as her mother-in-law went through radiation and chemotherapy.

Savala also experienced some medical issues of her own. In the middle of her third semester of TCC’s nursing program, she could no longer ignore the carpal tunnel syndrome symptoms that started while she was in high school, when she was a member of the band and worked a lot on the computer.

“I was having numbness and swelling in my hand. I was not able to have a good hold on things, and I had to wear a wrist brace all day,” recalled Savala. “Since writing was hard, I recorded lectures so I could go back and listen to the material. The other nursing students also took notes for me.”

Savala’s kind and altruistic nature made her classmates happy to assist. They also supported Savala when she had to take two months off for carpal tunnel surgery and recovery. It was a difficult process; Savala was not healing quickly, so she went to physical therapy three times a week until she was better.

Even with carpal tunnel behind her, Savala’s challenges continued. During her fourth and final semester in the nursing program, she was working full time, taking classes, participating in clinicals, getting ready for the licensure exam, trying to find a nursing job and putting her house on the market.

“If it was not for the help and support from my husband, my family, coworkers, classmates and professors, I would not have been able to finish the semester,” Savala said.

Those around her say she is stronger than she thinks—and that despite everything Savala has faced, her performance has never faltered.

“Professionalism is a value that we expect in nursing and try very hard to instill in our graduates,” said Jessica Cox, assistant professor of nursing, who oversaw Savala’s pediatrics rotation last fall. “Watching Palma work within the team in the clinical environment and with her colleagues, she demonstrated this quality in every encounter.”

Tippens agreed, adding, “Palma just has a really strong desire to make sure she’s taking care of her obligations. Her attendance and patient care have been wonderful, even while balancing work and school with her family’s health troubles and her own carpal tunnel issues. She is 100-percent committed to whatever she does.”

It was Savala’s positive attitude and her outstanding professional skills that led Tippens to nominate her for a special honor: the Dallas-Fort Worth Hospital Council Foundation’s Rex McRae Scholarship. The prestigious scholarship, named for the late president and CEO of Arlington Memorial Hospital, goes to a worthy student and hospital employee who represents the next generation of health care in North Texas.

Savala was shocked and honored to discover that she won. The DFW Hospital Council Foundation presented her the award at its annual luncheon in April 2019.

“Palma’s dedication and commitment toward achieving her degree made her a deserving recipient of this scholarship,” said Kristin Tesmer, president of the DFW Hospital Council Foundation. “The fact that she will be the first in her family to graduate from college, that she has maintained a 3.12 GPA and that she has been able to juggle these goals through the personal challenges of caring for her father and mother-in-law during recent health struggles displayed she is a natural caregiver with a tremendous future in health care.”

Savala will use the scholarship to pay off student loans—making her feel even more blessed when she crossed the stage and accepted her diploma at TCC commencement. It was a moment of great joy for her family as well.

“I knew she could do it,” said her father, Russell Boatman, who is fully recovered from his open-heart surgery. “I am so proud of her. Keep up the great work, Nurse Palma.”

“There are no words that can describe how I felt” at graduation, added Savala. “I was extremely happy and excited.”

She is also extremely grateful to TCC’s entire nursing faculty and staff.

“They were so helpful in the whole nursing school journey,” Savala reflected. “They want to help the students in any way they can to make sure we succeed.”

By all accounts, Savala is a success story. After she passes her licensure exam, she plans to take a job as a nurse with a pediatric home health company as she completes her bachelor’s degree. Savala’s next goal is to work in a critical care setting to enhance her critical thinking and judgment. She ultimately plans to return to the mother-baby unit, where she currently works as a patient care technician—bringing her experiences full circle.

“Nursing is such a rewarding field,” said Savala. “And TCC opened that door for me.”

This story is the latest in the “What’s stopping you?” series, celebrating members of the TCC community who don’t let challenges get in their way.