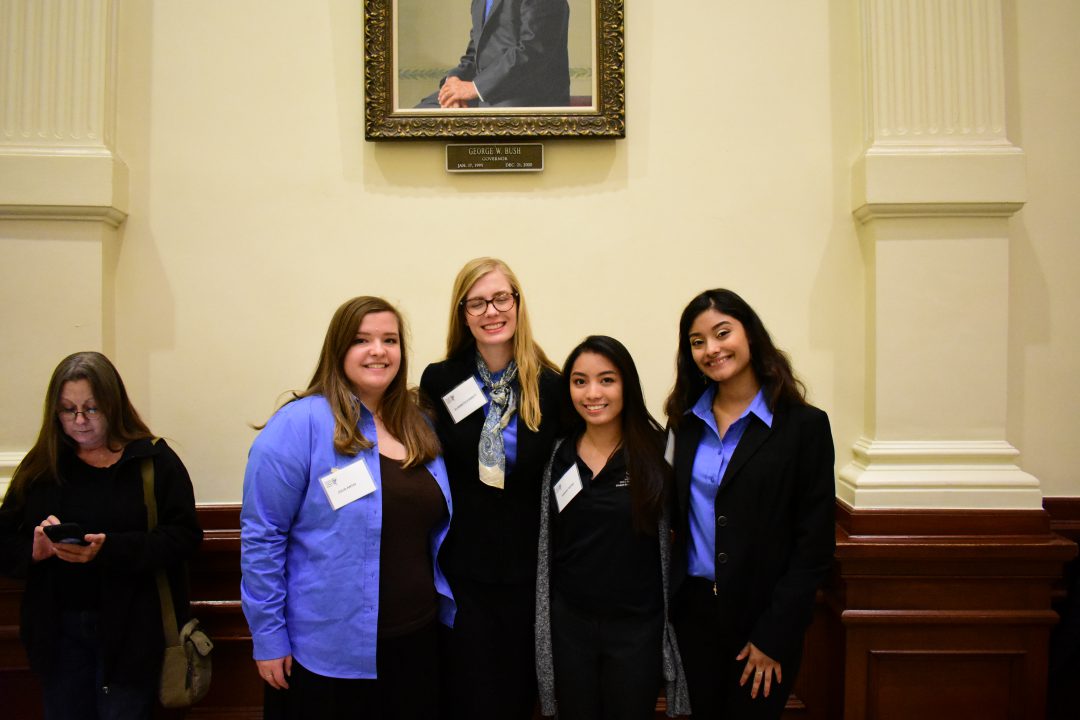 When it came time last fall to round up some TCC Northwest Students for a January visit to the Capitol in Austin to see the Legislature in action, there couldn’t have been a better wrangler than Kay Carroll, who had gone on the same trip as a student in 2017.

“I had been there and done that,” said Carroll, now a student development assistant in TCC Northwest’s Student Services Office, “so I was able to tell them exactly what to expect and what a good experience it was.”

It was only about a week or so before the trip, however, that the students found out they would have to be at TCC South before 5 a.m. to board a chartered bus for the journey. But so good had been Carroll’s sales pitch that the early departure was no big deal. Well, not much, anyway.

“I was a little shocked,” said Elizabeth Ellis, Student Government Association president, “but I was willing enough to do it. I couldn’t back out.”

The seven students – Ellis, Julie Antio, Kelcee Tarrence, Regina McCracken, Hannah Sapnu, Yaruby Castro and Carlos Monsante – were part of a contingent of 51 students, faculty and staff representing all six TCC campuses. The occasion was Community College Day, sponsored by the Texas Community College Association since 1997 with goal idea of bringing students, staff and trustees from around the state to press the TACC’s priorities to legislators representing their home districts.

According to Dustin Meador, the TACC director of governmental affairs, 38 of the state’s 50 community colleges were represented by more than 1,100 students. In TCC’s case, the students were joined by Board of Trustees members Bill Greenhill, Conrad Heede and Diane Patrick, herself a former state representative.

Once inside the Capitol, somewhat groggy from having slept most of the way, the students fanned out for their assignments. Some headed immediately for legislators’ offices while others, whose office appointments were later in the day, took a look around the building, which most had never visited.

At 10 a.m., they reconvened in either the House or Senate galleries to watch the sessions, largely ceremonial at this stage. In the House, the delegation was recognized from the floor by Rep. Chris Turner of Grand Prairie, whose District 101 includes TCC Southeast, along with Rep. Craig Goldman of Fort Worth.

Sapnu, Antio and TCC Northeast’s Zack Hearrel visited Rep. Giovanni Caprigleone. Tarrence and Monsante called on Sen. Kelly Hancock. Ellis, McCracken and Castro missed out on their office visit because of a scheduling error on the part of the legislator’s office, but Ellis didn’t let that spoil the day. “Oh, my goodness,” she said. “I thought it was great.”

It bothers her that most of her peers don’t consider themselves part of the political process. “They’re just not connected with the political world,” Ellis said. “They don’t know whom to vote for. They don’t know their representative and what they stand for. And I think it was important to be able to say, ‘Oh, wow, these people are representing me, doing something for me, even at the college level.’

“Many of my fellow students had not been to the Capitol before, so it was really cool for them. It’s a world they don’t really get to experience, and they may think, ‘Oh, it doesn’t influence me.’ But it does.”

The visit made Ellis revisit some earlier thoughts about perhaps pursuing a career in public service.

“I had kind of thought about it before,” she said, “but every time I walk through those huge doors, I think it would be so neat to work there. I don’t know what that would look like, but I got to talk a little bit with a legislative intern, and he had some good things to say about that.”

It was an opportunity for TCC students to make their voices heard, and those voices came in loud and clear.

“I always enjoy meeting with students from TCC, and I am always impressed by their high level of understanding of the complex state issues facing our state and their desire to be part of finding solutions,” Turner said. “As chair of the House Committee on Higher Education, I especially like hearing input from college students, who are directly impacted by the many of the decisions we make.”

And that, the TCC trustees said, was the whole idea.

“We know that our state legislators desire to know the wants and needs of community colleges from college administrators and board members,” Heede said. “but what we really want and need to hear is the individual stories of our students, the ones directly affected by the actions they take. The students provide the ‘why’ answers, the specific reasons behind the importance of continuing to make community colleges the driving force that provides the real answers, the pathways to how anyone can become successful in life despite their beginnings and all the obstacles they may have in front of them. Their heartfelt life stories produce the emotional response and connection that legislators need to take appropriate action.”

And more than that, said TCC Northwest President Zarina Blankenbaker, civic awareness is an important building block in education.

“Combining college coursework and civic engagement provides valuable learning opportunities for college students,” she said. “It aligns to TCC’s desire to advance integrative learning to prepare students to be world ready through participation in life-enriching activities that are also socially beneficial to the community.”