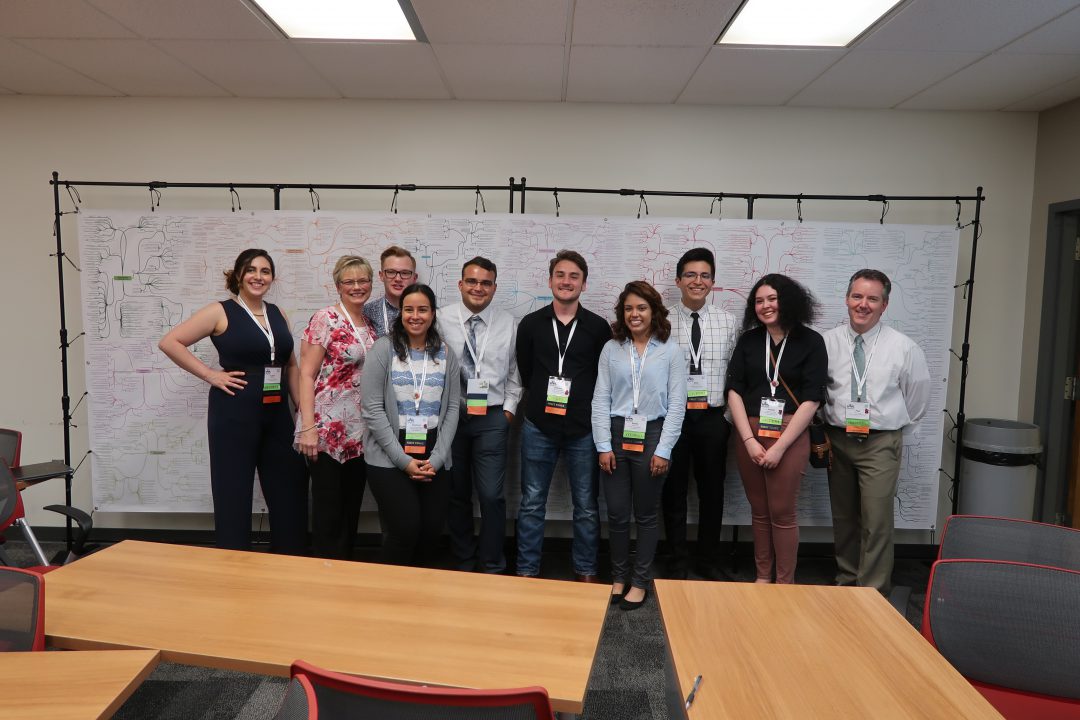 Paul Luyster (Biology) and nine TCC South students in May presented a workshop, “Using Case Studies and Concept Mapping Assignments to Enhance Student Engagement and Learning in A&P” at the 32nd annual Human Anatomy and Physiology Society (HAPS) Conference at The Ohio State University in Columbus.

Luyster, who teaches anatomy and physiology (A&P) and other biology courses, also is the sponsor of the TCC South Health Science Club, a student group that supports those seeking degrees in health occupations. He presented his research on the efficacy of using concept maps in his A&P and Majors Biology courses during the fall 2017 and spring 2018 semesters.

The nine students – Brian Cisneros, Daniel Duran, Stephanie Galaviz-Webster, Jocelyn Gonzalez, Karely Leon, Mitchell McDowell, Auston McIntosh, Lisabel Ruiz-Steblein and Jami Williams –are pre-nursing or pre-med majors and members of the Health Science Club. Four are Health Science Club officers, and two are supplemental instructors for A&P. Since several of these students had utilized concept mapping in Luyster’s courses, they volunteered to create a comprehensive concept map that included all of the 900+ learning outcomes published by HAPS for A&P I and II. Their goal was to use this project to reinforce their own understanding of A&P and to create a teaching tool that could be displayed in the South Campus science building for future students to use.

They worked on this project on their own time between early January and mid-May, including Spring Break, while also juggling classes, jobs and other responsibilities. The final product, a 16-foot-long concept map with more than 5,000 elements, was printed and displayed during the conference. These students also shared their perspectives about concept mapping as a learning tool during Luyster’s workshop presentation. That workshop drew a crowd larger than the room could hold. Many conference participants approached Luyster and his students afterwards to ask follow-up questions and to thank them for presenting their amazing map.

While at the conference, the students were able to meet hundreds of community college, university and medical school A&P professors and authors from across the country. They attended multiple workshops on recent medical discoveries, physiology research, and health education. Several even participated in cadaver dissection workshops. They were interviewed for a national podcast on A&P education. The students also visited the Center for Science and Industry (CoSI) Museum and a few other local landmarks while in Columbus.

Even though few undergraduate students typically attend this conference, the support these students received from the other conference attendees was overwhelmingly positive. Dozens of educators from colleges and universities across the country asked for copies of the students’ concept map. Many stated that they plan to print and display it in the biology departments of their institutions as a teaching tool. One emailed Luyster, stating, “Of all the HAPS sessions I attended, yours is the one I anticipate will have the most influence on my teaching.”