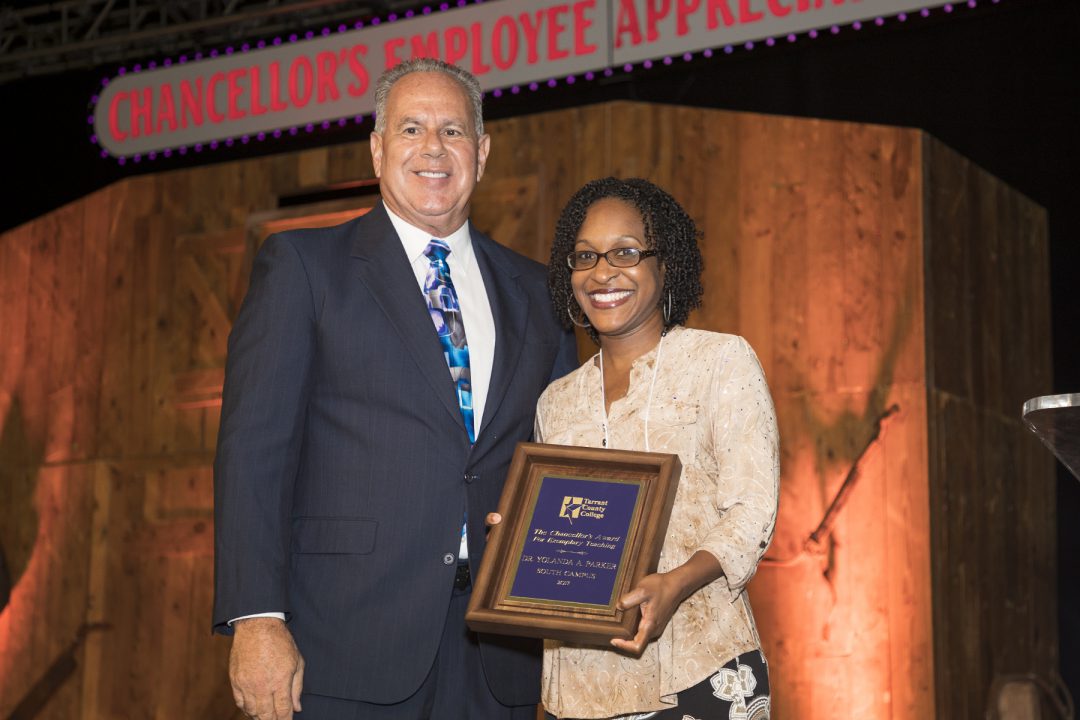 Last March, when Yolanda Parker (mathematics) was selected by the Dallas/Fort Worth Chapter of the National Association of Black Engineers as one of 10 “Hidden Figures of Dallas,” only a few campus colleagues knew about it. She didn’t want to toot her own horn, you know.

When another accolade came her way in August, she did not have that option. It was in front of almost the entire TCC family at the Chancellor’s Breakfast that she was named South Campus’ winner of the Chancellor’s Award for Exemplary Teaching for 2017.

Still, a few weeks after she received the honor, the plaque was still nowhere to be seen in her office. “Yes, I need to put that up,” she said. “It’s just that I don’t have any nails at the moment.”

It is not only a lack of nails, but also the lack of an ego big enough to demand a wall space festooned with honors and awards.

It is also not that she doesn’t recognize the significance.  “It’s something I’ve wanted … kind of a goal, something I’ve aspired to,” Parker said. “But it’s not so much ‘Look at me,’ as it was nice to know that my work and my effort are recognized and appreciated.”

It is also especially meaningful since winners are chosen, not by administrators, but by peers – faculty who are former winners themselves. “That meant a lot,” she said, “because not only did my administrators notice something in me (to make the nomination), but my colleagues – other faculty – affirmed that what I have been doing is worthy of recognition.”

By no means did she consider it a cinch that she would win. “I know the people who also were up for the award, so it wasn’t something I thought was in the bag. So I was excited to win, but had I not won, I wouldn’t have been upset because I knew the work of the other people who were nominated and they would have been just as deserving.”