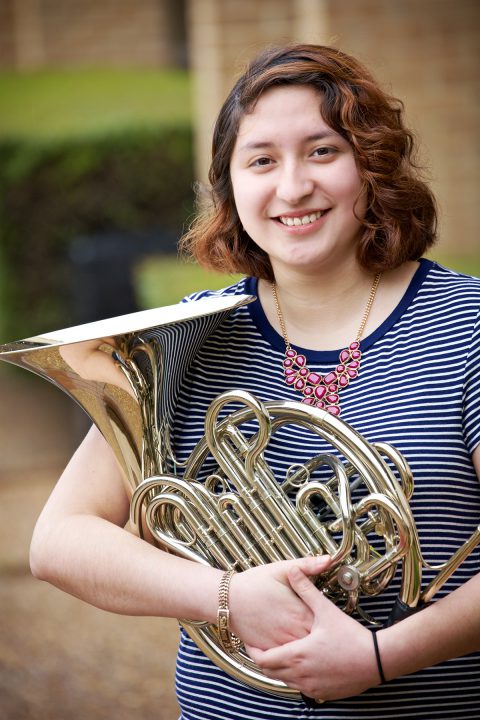 In February, Salma Alvarez became the first Tarrant County College student to play in the Texas Community College Band Directors Association All-State Symphonic Band. Of course, being first is nothing new for Alvarez. She is the oldest of four children and the first in her extended family to earn a college degree.

“I always knew I would go to college,” Alvarez reflected. “I expected it of myself, and my parents did too. Even though they didn’t have that chance, they wanted me to have more than they did.”

Alvarez’s family emigrated from Mexico when she was a toddler, seeking more opportunity and to be closer to relatives. They settled in Euless, where Alvarez grew up. During junior high, Alvarez had to choose an elective: choir, art or band.

“I’m a horrible singer, and I can’t draw,” smiled Alvarez, “so I chose band.”

The decision turned out to be a good one. She began playing the French horn and enjoyed it so much that she considered becoming a music teacher. While at Trinity High School, an instructor told her about the music program at TCC.

No one in Alvarez’s family had enrolled in college before. After graduating from high school in spring 2014, she turned to Northeast Campus staff members to guide her through the TCC registration process. While they were friendly and helpful, college was still a little overwhelming.

“I was really scared at first, especially the first semester, because everything was brand new. After that initial semester, everything set in and I was doing fine,” Alvarez said.

She was doing more than fine, according to Gerald Ringe, associate professor of music.

“Salma is the model of what we as faculty would love to see in all our students,” Ringe noted. “She takes an active role in her education, always trying to get the most out of her learning environments.”

Indeed, part of what made Alvarez a stellar student was her initiative to ask for assistance. She started out taking too many classes at once and struggled to stay on top of her assignments. When Alvarez started working with faculty members on her degree plan, however, she gained the balance she needed. She became a regular at her professors’ office hours, getting clarity or extra help when she needed it.

“If you don’t seek out the resources that are available, you are missing out,” stressed Alvarez. “You will miss the help and the connections. Professors are there to help you do your best.”

Impressed by her musical talent, Professor Ringe recommended that Alvarez try out for the state symphonic band. She began learning the music in August 2015 and sent in her audition tape a couple of months later. When she didn’t hear anything back, she was discouraged. Then in late December, the call came. Alvarez was TCC’s first instrumentalist to be accepted into the elite group of student musicians. One of her peers became an alternate.

“I felt like there was a lot of pressure on me, but it was great to represent TCC in a statewide band,” Alvarez said.

“I have never performed in a band of that size before,” Alvarez said. “We rehearsed multiple times a day, and after the performance I was complimented on the horn features by several people.”
The concert was a rewarding experience not only for Alvarez but also for Jean Bryant, a Northeast Campus adjunct music instructor who has known Alvarez since she was her junior high band director. Following Bryant’s retirement from that position, she began teaching private lessons and has worked with Alvarez ever since.

“I’ve watched Salma set and achieve goals since she was in the seventh grade,” said Bryant. “It has been a treat to watch this amazing young lady grow musically. She worked very diligently to win a position in the All-State Symphonic Band. Salma had the opportunity to perform with outstanding musicians, and she gave an exceptional performance.”

It was a fitting capstone achievement for Alvarez’s time at TCC. In May, she will graduate with her Associate of Arts in Music. She will continue her education this fall at Texas Woman’s University, where she plans to also play the French horn.

“I had a lot of fun at TCC and had great teachers,” Alvarez observed. “And TCC prepared me to go to a university. The workload I took on here is on par with a university experience.”

While music will always be a part of her life, Alvarez’s goal is to get a bachelor’s degree in psychology and specialize in counseling police officers.

“There has been a lot in the news recently about police officers. They need support, and I feel like I can help,” she explained.

Alvarez is helping in another way as well: by paving the way for her younger siblings to go to college. Her sister will graduate from high school this year and then enroll at Northeast Campus.

“I am so proud of how far Salma has gone and how she has pushed herself to overcome obstacles,” said Marlene Alvarez. “If people tell her she can’t do something, she proves them wrong. I want to do the same thing.”

People shouldn’t be intimidated about being the first in their family to pursue higher education, emphasized Salma Alvarez.

“College is the way to a better future. Just ask for help, and don’t put limitations on yourself. If you think you can do it, you will.”

The first in a year-long series celebrating TCC students. Many will tie to TCC’s 2016 new awareness campaign focusing on “What’s Stopping You?” You may seen some of our commercials during March Madness on CBS 11. You may check them out anytime on TCC’s YouTube channel: