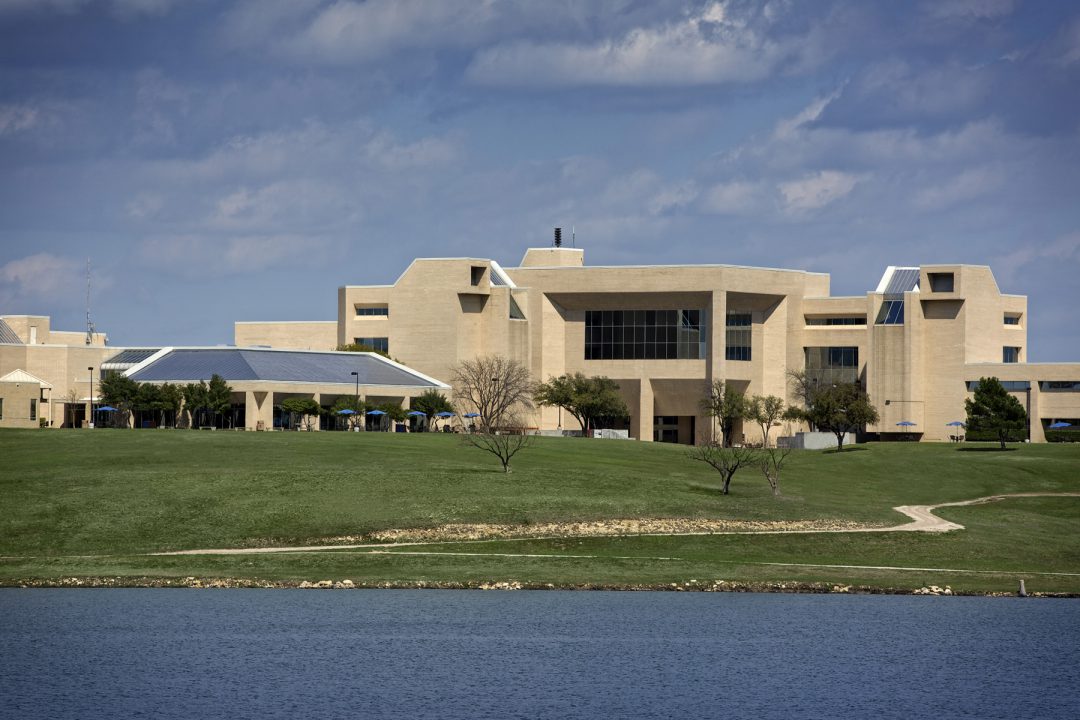 Volunteer faculty, staff and students navigated more than 3,000 new and returning students to TCC Northwest during the first two days of the Spring semester Jan. 18 and 19. AskMe tables were strategically placed around campus and were primed with maps, bottled water, snacks, TCC giveaways and friendly faces. This program first came about to help students find their way around campus and offer them a positive experience on their first days. It has now been implemented across TCC as a One College event.

Mike Esquivel, Chair of the Logistics and Supply Chain Management department, was featured in a Fort Worth Star-Telegram article Jan. 19 about global supply chain challenges. The article is specifically focused on how supply chain challenges have impacted the ability for consumers to obtain cough and cold medicine, which is of particular importance now.

David Bulpitt, Instructor of horticulture and program coordinator, made an online presentation to the Tarrant County Food Policy Council (TCFPC) on Jan. 20. This presentation was about TCC’s Horticulture program overall as well as its effort to assist urban farmers by supplying vegetable transplants grown in TCC Northwest’s greenhouses. Bulpitt was invited by David Aftandilian, co-chair of the TCFPC’s working group on Community Gardens and Urban Agriculture. This working group is also partnering with Grow Southeast, a nonprofit aimed at addressing food and economic inequities in Southeast Fort Worth. These two groups are working together to promote urban agriculture startups and overall awareness of food insecurity, including reaching school children. With help from TCC’s Horticulture program, they hope to introduce students to gardens and farms at their schools as well as to help them make the connection between those projects and careers in horticulture, food service, and urban agriculture.

The Chisholm Trail High School Robotics Team placed eighth out of 28 teams in the UIL robotics competition in February. This team was led by Steve Smiley, Instructor of computer science, who serves as their instructor and mentor.

Sharron Conrad, associate professor of history, delivered a talk on Feb. 9  titled The Late Awful Calamity: African Americans and Epidemics from 1793 to 2021. About 25 students attended this excellent presentation which was part of the Intercultural Network’s celebration of Black History Month.

The North Texas American Society of Nondestructive Testing held their monthly meeting at the Center of Excellence for Aviation, Transportation, and Logistics on Feb. 15. It was a chance for TCC to show the community the new NDT/NDI Program. The meeting started with a short CEATL presentation, which was followed by a tour of the facility. It was a fantastic opportunity for the community to come together and celebrate the future of Nondestructive Testing. In the classroom, there were inspectors using equipment the spectators had never seen before, business owners reviewing equipment they are considering buying and children inspecting under their parents’ guidance. It was a productive evening with potential for growth.

Jason Clark Miller presented a co-authored paper, Critical Stress: Another Look at Police Officer Religiosity and Coping with Critical Stress Incidents, as an invited guest lecture at Tarleton University on Feb. 16. Critical incident exposure is associated with numerous adverse outcomes for police officers. This presentation reviewed the impact of traumatic exposure on the mental and physical health of officers and explored the ability of religion to mitigate the harmful consequences of trauma exposure. Following from previous research in this area from 2018, this paper presents a novel approach to measuring religiosity in an attempt to understand the counterintuitive findings of the authors’ prior research. Using preliminary data from a pilot survey of 87 participants, they found religious officers rely on different coping strategies when responding to critical stress than their “less” religious counterparts. Furthermore, their results suggest that some “conceptions of God” are more closely associated with adaptive coping strategies than others and have significant reductions in reported levels of stress.

CEATL hosted the Biannual FAA Inspection Authorization Seminar for FAA Air Frame & Power Plant mechanics on Feb. 19. The event was coordinated by Trevor Saylors, coordinator of CEATL. By attending the seminar, these mechanics met requirements under FAA Part 65.93 to hold an Inspection Authorization Authority endorsement. More than 120 participants attended the event. CEATL provided attendees with information sessions and discussions pertaining to changes in the aviation industry, as well as guest speakers including Stuart Riley, instructor of aviation maintenance, who spoke about human factors in aviation. Instrumental in the event’s success were Administrative Assistants Christine Carr, Summer Abne, and Caroline Barentine, as well as Cesar Mansivais, who is currently serving as an intern from Christo Rey High School.

The Professional Development sub-team of Northwest’s Employee Success & Wellbeing NWISE Team hosted a half-day of professional development for adjunct faculty at TCC on Feb. 19. Centering on the theme of “Reaching Every Student,” about 30 instructors from multiple TCC campuses as well as embedded instructors at area ISDs attended the event. They were welcomed by Vice President of Academic Affairs Thomas Sosa and participated in an ice breaker facilitated by Integrative Learning Fellows. Presentations included universal design for learning by Michelle York, culturally responsive teaching by Tina Ross and Alejandro Garza and reaching veteran students by Rodney Pearson. The event was presented in a hybrid format, in-person and on Microsoft Teams. NWISE team members Rodney Pearson, Tina Ross, Michelle York, Ryan Ferguson, Karen Martz and Vanessa Wadlington coordinated the event to help adjunct instructors improve their teaching and make connections with others at TCC.

Theatre Northwest held its annual children’s theatre production March 2-5, the first since the return to campus. This year’s production, “Hansel and Gretel,” attracted more than 800 audience members over four days including about 600 elementary school students from our service area – many of whom had not been on a field trip in more than two years and most of whom had never seen a live theatre production. This annual tradition has become one of the many highlights of Northwest’s award-winning theatre program and organizers were thrilled to bring it back this year. They express thanks to all faculty, staff and, of course, the talented and committed students for supporting the arts at Northwest Campus and in our community.

Junior Land Scholars attended their annual service learning opportunity in March  at Fort Worth Nature Center and Refuge. Their service learning project was focused on helping to clear paths to make way for wildflowers. During this event, students also learned about prairie diversity and how to conduct quadrat samples. In addition, they were able to interact with and feed bison, who served as examples of prominent mammals of the prairie. On March 10, the Senior Land Scholars were invited to host a booth at the FWISD Student Showcase. Students demonstrated how to create seed bombs as part of their Senior Land Scholars Research Project. Tarrant Regional Water District was so impressed that it will be reaching out to further engage with the Land Scholars program in the future. Both events were part of the Marine Creek Land Scholars program, a collaborative partnership with MCCHS that focuses on developing tomorrow’s land leaders through team building, environmental problem-solving, public speaking and providing research opportunities in various fields of biology.

The Northwest Chamber Singers, directed by Patricia Bedford, and the Northwest Chamber Orchestra, directed by Benson Lee, presented two concerts to TCC and the community March 7 and 8. The Chamber Singers and Chamber Orchestra are tight-knit teams that enjoy a very positive and friendly culture and environment. Northwest music students and faculty strive to grow and create memorable musical moments together that allow them to connect people and make a difference in the community through music. These performances are special not just because they are a combination of everyone’s hard work towards one united goal; the teams also want to give the audience and community a sense of hope. This theme of hope for the concerts was inspired by one of the works performed – the world premiere of Kyle Gordon’s There Is Always Light, about which Gordon noted, “For me, There Is Always Light is an invitation to meditate and reflect on the past couple years. What I felt people, myself included, needed to hear was a piece of hope.” The students concluded the performances with excerpts from Igor Stravinsky’s ballet, Firebird, in which the main character (Prince Ivan), with the help of the magical Firebird, defeats the evil king and frees everyone under his spell. The idea is that listeners will experience hope, muster collective strength in the face of adversity and eventually soar on wings like a Firebird.

Northwest Dance Professors Amy Jennings and Lacreacia Sanders, along with seven Northwest Dance Program students, attended the American College Dance Association’s South-Central Regional Conference at Lamar University in Beaumont March 16-19. The conference consisted of more than 400 participants from colleges and universities throughout Texas, Louisiana, Arizona, California and Wyoming. During the conference, dance students had the opportunity to learn and engage in 14 dance master classes in a variety of genres and cultures from faculty and guest artists across the region. The seven Northwest students are members of Mosaic Dance Project, Northwest’s resident company, which selected and performed Strings of Hope, choreographed by former Northwest Dance Student Holly Tate, and Isolated Fantasy, by former TCC South Dance Student Anthony Wade. Dance students were immersed, watching more than 25 dance works held in informal showcases and more than 35 dance works held in the formal adjudicated concert over the five-day conference. Professors Jennings and Sanders taught master classes to students across the region in two-year, four-year and graduate dance programs. Attendance to ACDA is grounded in higher education and allows for students to engage in scholarly research of dance, connect with four-year universities and receive artist feedback and merit from national dance scholars and artists in the field.