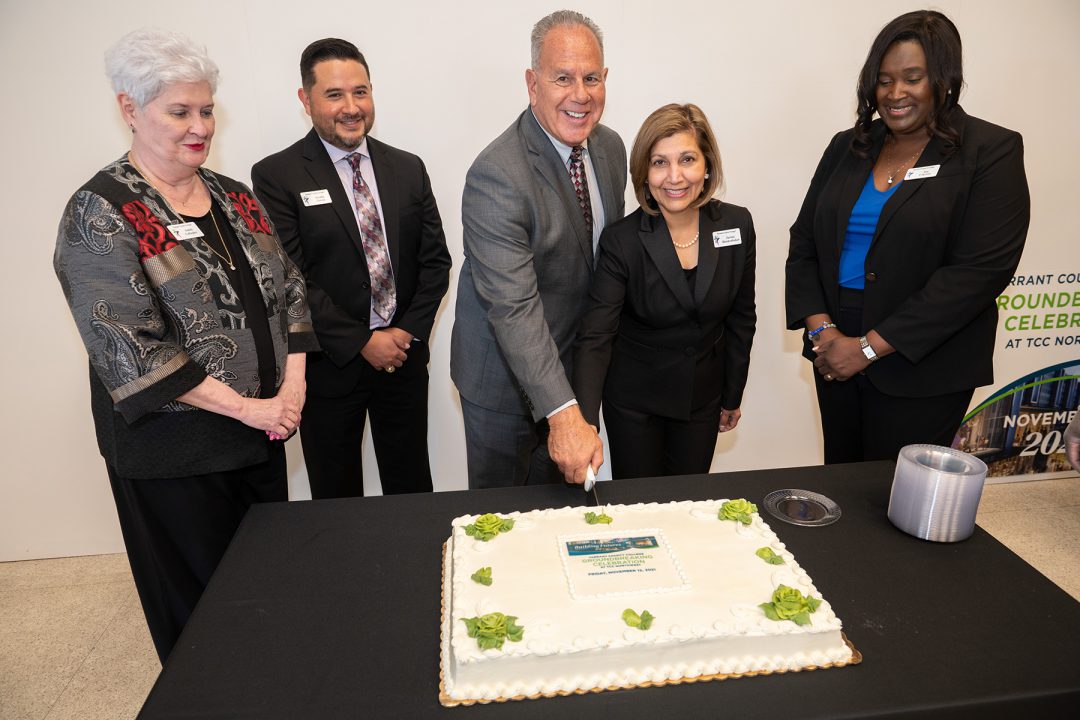 “I know I know I’ve been saying I’m blown away by this project,” said an attendee at the TCC Northwest Groundbreaking Celebration, “but I didn’t mean literally!”

It was, indeed, a gusty November afternoon as the campus family was joined by District Office staff, representatives from other campuses, members of the governing boards of both TCC and the TCC Foundation, as well as special guests.

The wind was such that, earlier in the day, it threatened to lift from its moorings the tent rented for the proceedings, and when one of the weights securing a guy line shifted, reinforcements were called in. Two multi-ton construction vehicles chugged down the hill and were lashed to the lines. Problem averted.

“Well,” President Zarina Blankenbaker said in her opening remarks, “we are known as the windy campus.”

A few moments later, Chancellor Eugene Giovannini countered. “I need to remind Zarina and everyone else here that if it wasn’t for the wind, we wouldn’t be here today, he said. “Back in 2016 the wind came through just a little stronger than today, and the result was that the Northwest Campus cornered the market on scaffolding for four years.”

But the event was a breeze in every sense of the word as speakers talked about the redevelopment project in terms of the past, present and future.

Blankenbaker gave highlights of the campus’ past, from the donation of land by the Walsh Family to the opening for the Alliance Airport center. “This positive progress underscores our legacy of serving our community and, more important, every student entering our doors,” she said.

Giovannini, after noting that it hadn’t been an entirely ill wind in 2016, talked about TCC Northwest’s important role in the College’s mission of providing access to educational and workforce training opportunities with such programs as aviation, police and fire training, After highlighting the Three Goals, Eight Principles initiative, he closed by saying, “As we turn our shovels this afternoon, let’s be reminded that students and our community are at the center of our service. Education is our community’s most important public treasure, and as stewards of that gift, we are grateful to the citizens and family members who recognize our value and enroll here generation after generation.”

The next speaker, Teresa Ayala, provided a bridge from past to present to future. A TCC Northwest alumna who “remembers the wind,” she now serves as president of the Board of Trustees, whose mission is to guide the College in years to come. She accented the “Building Futures” theme of the event, saying the board is dedicated to providing the best in state-of-the-art building technologies, student resources and programs designed to develop “students poised to take their rightful places as trailblazers and leaders.”

While the campus has changed since she attended, she said, “the students have evolved, but they still aspire to succeed, and we are committed to helping students achieve the dreams they envision”

One of those students, Keeley McFadden, shared with the audience her personal dream of becoming an ultrasound technician. “As I come to campus each day, I can’t help but notice the construction and how fast the buildings are going up, transforming before our eyes,” she said. “Just like these buildings, many futures are being built here, brick by brick. Just as these buildings will be here for many years, I am developing skills that will be with me for a lifetime.”

McFadden’s fellow students had major roles in the celebration, from the jazz band to the dancers to the student ambassadors who acted as guides and docents. But perhaps the most touching and appropriate contribution was that of vocalist Jesse Martinez and accompanist Lauren Koszyk, who performed “A Dream is a Wish Your Heart Makes,” from the 1950 Disney film, “Cinderella.” It served as a reminder that Tarrant County College is a place dreams come true, furnishing Cinderella stories for decades past, present and future.