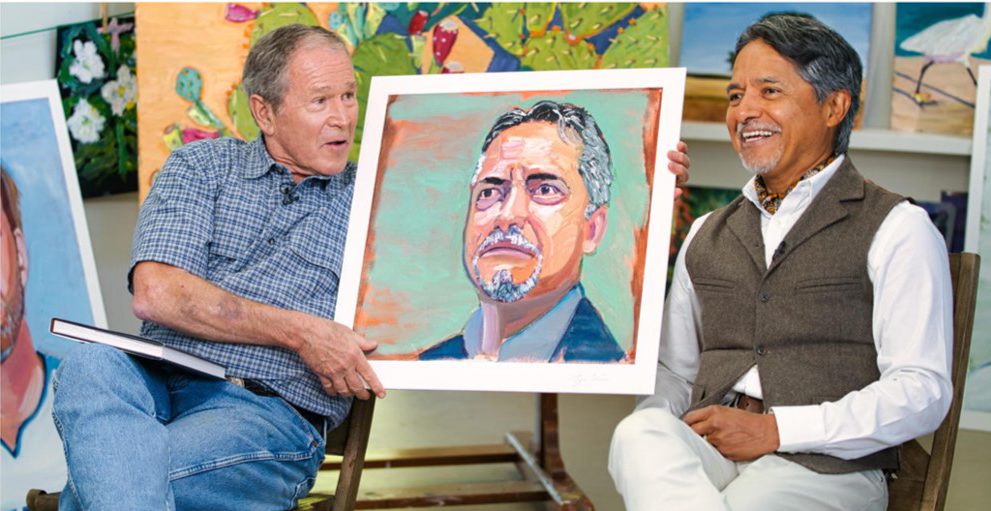 When Tarrant County College professor Carlos Rovelo packed his car in El Salvador 41 years ago, bound for Wichita, Kansas, he hoped for two things: a strong university education and personal safety. Those things weren’t achievable at that time in his home country, which was being torn apart by a civil war that killed more than 75,000 people over a decade.

Rovelo knew the United States as a land of opportunity. However, he could never have imagined the good fortune that awaited him, and that he would one day become acquainted with an important leader in the history of his adopted nation—former President George W. Bush.

To understand how Rovelo connected with the former president, it’s important to delve into the past. As a teenager, Rovelo was surrounded by extreme political violence. Several of his high school friends were among those killed in the Salvadoran war. Rovelo’s father was tortured, and the family was forced to pay a ransom for his return. An archbishop was assassinated during a mass near Rovelo’s home—an act his grandmother witnessed.

When he finished high school, Rovelo applied for a student visa. He left behind his family and his culture to attend Wichita State University. His homesickness was intense but so was the violence in El Salvador. Rovelo’s family was living under martial law. Increasing numbers of religious leaders and businesspeople were being assassinated or kidnapped. Rovelo’s immediate family members were granted asylum visas, and they joined him in the United States. A church in Wichita provided the family a furnished apartment and other assistance. College friends invited Rovelo into their homes, and he began learning more about the American way of life and the nation’s values.

The Rovelo family eventually moved to Dallas for better economic opportunities. Rovelo finished his bachelor’s degree at the University of Texas at Dallas, then earned a master’s degree at University of Dallas. Today, he is a longtime citizen who teaches federal and state government as well as Mexican American studies and art history at TCC South. His four children are college-educated, and Rovelo is a proud grandfather of nine.

“I don’t want to sound overly idealistic,” he adds. “Things rarely happen in a straight line. I tell my students, ‘You will fall, but you pick up the pieces and keep going. You gain wisdom in the process.’”

Indeed, Rovelo’s life in the United States wasn’t always easy. There was a time when he lived in public housing; Rovelo had no health insurance when his second daughter was born, instead relying on public programs at Parkland Hospital. But he practiced what he now preaches.

“I didn’t like it, and I believed it was only temporary,” Rovelo says of those days when he struggled. “I learned a lot. It strengthened my resolve to be successful.”

Over the years, as he worked hard and achieved that success, his love for America grew. Rovelo developed an unflappable belief in this country’s goodness. “I’ve learned that anything can happen in the United States. Anything,” he states.

Some of the most extraordinary things that happened to Rovelo came about by chance. At his summer home in New Mexico two years ago, Rovelo was introduced to Jim Woodson—a master painter who taught for decades at Texas Christian University. Woodson is also one of the painting instructors for former President Bush, who took up the art after leaving the White House. Woodson invited his new friend to meet the former president.

Rovelo and his wife—Sherry Dean Rovelo, Ph.D., a communication studies professor at Dallas College Richland Campus—were introduced to former President Bush and former First Lady Laura Bush at an art exhibition. Their conversation continued for nearly an hour, and as it wrapped up, a request was made. “I’d like to paint you, Carlos,” said the former president, who was just beginning a special project—painting the portraits of immigrants, with the intention of sharing those paintings and the immigrants’ stories in a book.

Rovelo’s photo was taken for the former president’s reference. “I was wearing a scarf, and President Bush asked me to remove it. He said, ‘I don’t paint scarves,’” recalls Rovelo with a laugh.

Rovelo says he later learned that the former president painted his portrait as soon as he returned to his studio. That portrait and Rovelo’s biography are included in the book Out of Many, One. Published in spring 2021, it features 43 immigrants from 35 countries, including everyday people and prominent figures. Rovelo’s portrait is one of the cover images.

“It’s an honor to be included in this kind of work,” Rovelo says. “For me, it’s a type of American fairy tale. I deeply appreciate President Bush’s vision to honor people from across the globe who have contributed to American ideals. One of the consistent themes in this collection of stories is the way in which Americans have welcomed immigrants and enabled them to overcome challenges.”

“I really don’t want to get involved in politics,” Bush told O’Donnell. “But you know, the tone of the debate was just so disrespectful to people like Carlos.”

O’Donnell asked Rovelo what he thought about that tone.

Rovelo shares the essence of his response to O’Donnell: “I think to better understand America, you have to see it long-term, with a wide angle. You can’t tell me who America is via a narrow angle. America is many things. If you focus on negativity, that will limit you. But if you look for America’s best, the legacy [and] the hard work of the people that preceded us, that’s enough to inspire you.”

After Rovelo answered O’Donnell, former President Bush spoke. “You see why I painted the guy,” he said with a chuckle.

Rovelo hopes Out of Many, One will contribute to a renewed sense of empathy and understanding among Americans; he also wants the book to encourage new immigrants to pursue their dreams. “For me, America’s best days are yet to come,” he explains. “That’s non-negotiable for me. I have to remain as hopeful as our predecessors.”

Rovelo has no doubt that if he had remained in El Salvador, he wouldn’t be alive. He thinks back to the day he left his native country, musing about what he would have said if someone told him then that he would one day have his portrait painted by a president. “Impossible! I don’t even speak English. I have no clear path to residence or citizenship. But if this could happen in any place, it would be America.”

Despite ongoing media attention and multiple meetings with the former president, Rovelo remains unfazed. He views his work with students at TCC as one of his most important roles. “I want to inspire students to dream big about their own futures,” he says. “That’s an important way for me to pay my many blessings forward.”

He is succeeding, inspiring class after class. Lori Moreno Kelly studied government with Rovelo in spring 2021. The granddaughter of Mexican immigrants says Rovelo’s perseverance and appreciation of America are an example to others—and emblematic of many immigrants who have found refuge here.

“He brings color and light to our society,” Kelly says. “He is a success story, and so is my family. My grandparents were beautiful people that loved their rich history and took great pride in being American as well. I love what Professor Rovelo always says with pride: ‘Only in America.’”

Rovelo used those words in his interview with O’Donnell, talking about the wonder of appearing on the cover of the former president’s book after immigrating here with nearly nothing: “Only in America. That’s what this country is all about. Never say never.”

The portrait of Carlos Rovelo, and those of the other immigrants featured in Out of Many, One, are on display at the George W. Bush Presidential Center at Southern Methodist University through January 3, 2022. The center’s website also has information about where to purchase a copy of the book. See the CBS News story with former President Bush and Rovelo on YouTube.