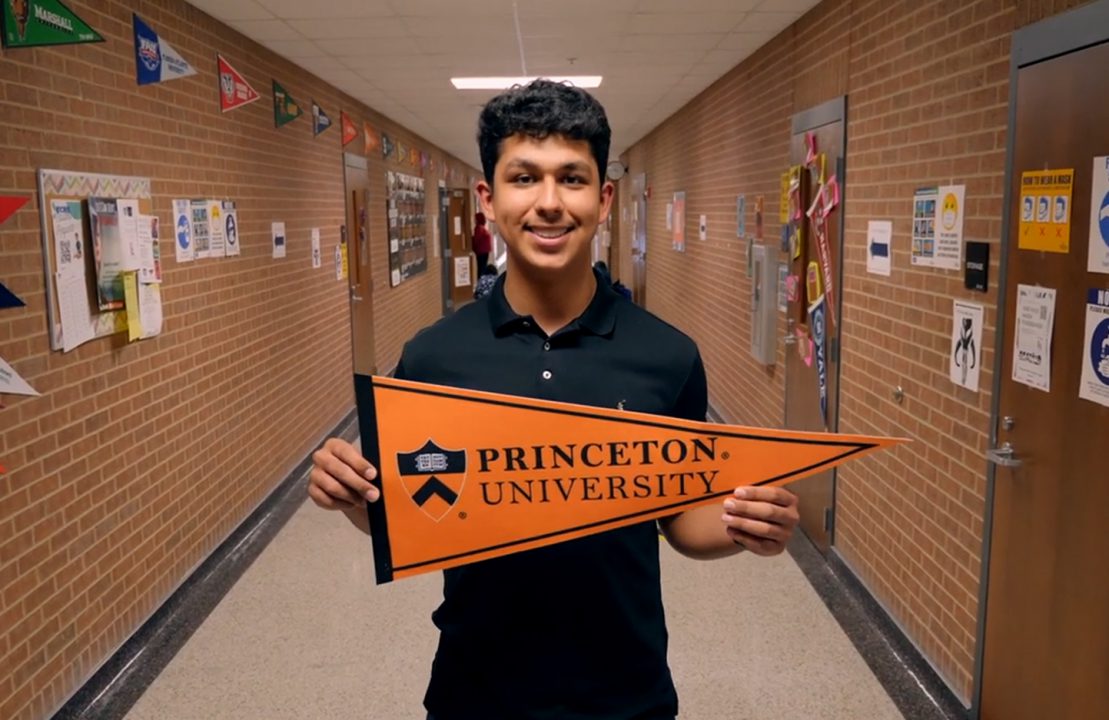 Like all students in TCC’s early college high schools, Jesus Hererra’s plan– in addition to receiving a top-flight education – was to save both time and money.

He’ll save time all right, graduating this spring from the Mansfield ISD Early College High School at Timberview with both high school diploma and college degree.

And the money? That’s no longer an issue, not after he received scholarships worth more than $280,000 and an acceptance to Princeton University. His plan includes bachelor’s and master’s degrees in engineering, after which he looks to work for the government or start his own company.

“My immediate reaction was one of disbelief,” Herrera said. “All of my worries had miraculously been eradicated, and I did not have to stress over financing my college education anymore.”

He will receive a Dell Scholars Scholarship providing $20,000 annually for four years, a laptop and textbook credits. He was also selected for a QuestBridge Match Scholarship through which high-achieving students with just-as-high financial need receive full, four-year awards from one of QuestBridge’s partner universities worth, in Herrera’s case, more than $200,000.

Herrera will be the first in his family to graduate from high school and attend college. “Despite not being able to offer me any academic advice and a limited amount of financial support,” he said of his parents, “the emotional support they have always granted me has been more than enough to motivate me to continue striving forward,” he said.

He gave a shoutout to several TCC Southeast faculty for “helping me through my educational journey,” including Benita Reed, Nena Kabranski, Hamed Madani, Leonel Longoria Montiel and Trish Lackey. He especially singled out Lara Alvarenga as being “a very supportive and understanding instructor who has helped me adapt to the collegiate environment.

“She has always been able to empathize with the early college program and thus give me, along with my classmates, suggestions as to how to balance our school work with extracurriculars,” he said. “She always emphasizes the importance of joining clubs and organizations within our community and TCC as they provide life skills that may prove beneficial in the future. She believes we should explore our interests but also to not be afraid of trying new things, especially her English Honor Society.”

For her part, Alvarenga knew she had someone special in Herrera from his first day in her English class. He was sitting in the front row with three friends “who could be silly at times, but the difference in Jesus was his notable maturity compared to the other students. Whenever he posed a question or engaged in group conversation, it was clear that he had collected his thoughts prior to engaging.”

When instruction abruptly turned virtual last spring, she said, Herrera “never missed a beat. When he would respond to his peers’ initial posts, he would truly engage in a conversative manner as if we were still in person. It really set the tone for his section because I noticed other students changing how they were engaging in the discussion board to the more thoughtful manner that he and a few of his other peers were engaging in.”

Alvarenga concedes that it’s a big leap from high school senior to Princeton junior, but thinks Herrera more than up to the task. “Jesus is a student who is driven by his desire to be successful in all that he does, and he has already proven that he has the work ethic to achieve his post-secondary goals at a high level in the time that he has been a student at Mansfield ECHS and TCCSE,” she said. “I am confident that he will continue to meet his own high expectations. Thus, I do believe that he will be successful at Princeton.”