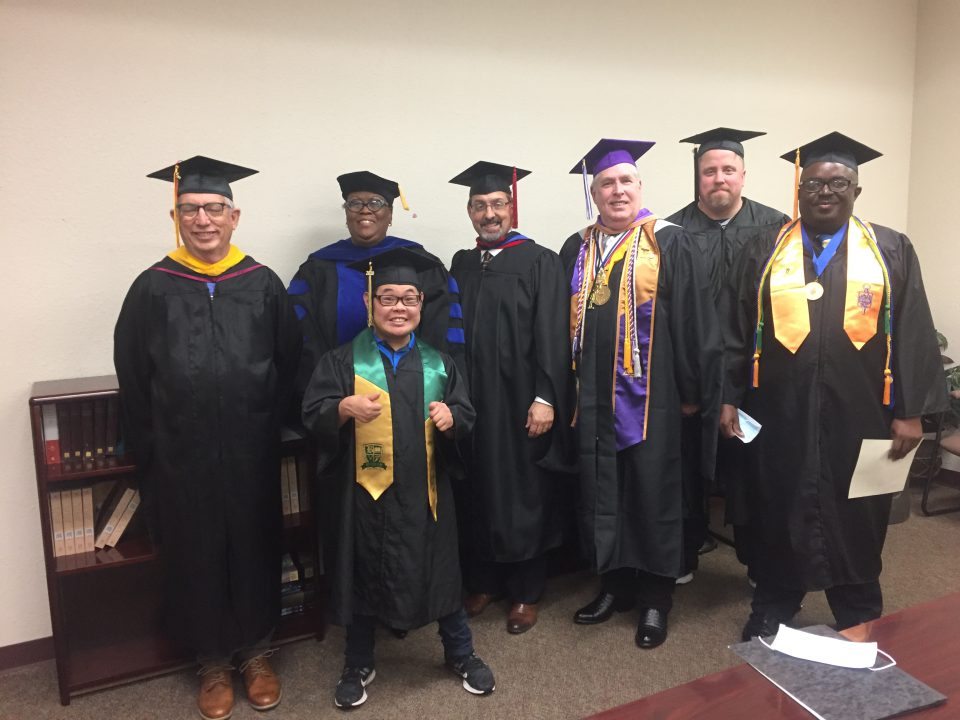 Each morning they woke up at Cornerstone Assistance Network’s (CAN) New Life Center in Fort Worth, a men’s residential housing program for homeless men who desire to attend college, but they didn’t let adversity block their path to success.

“Since I’m a data nerd, I found the master’s program at USC to be pretty easy to manage,” said John Smith, 63, who had to overcome a serious health issue during his journey. “The GIST program at USC was 100 percent online, which was good for me.  A special deal on internet service allowed me to take my classes. The internet speed was slow, but it was fast enough to complete my work and finish the program.”

Since Smith and the other men living at the Cornerstone New Life Center didn’t have an opportunity to participate in a graduation, leadership and staff decided to host a commencement ceremony in June to recognize the residents’ accomplishments. Not only was this the first live graduation ceremony hosted by the facility, but this year’s graduating class, which included five residents receiving college degrees, made Cornerstone New Life Center history.

“CAN’s New Life Center has had many college graduates over the past 15 years but never this many in one year,” said Philip Posey, director of housing for Cornerstone Assistance Network. “I believe our increased success is due to our increased desire to partner with Tarrant County College’s Visions Program and the passion of Dr. Tina Jenkins to truly make a difference in the lives of the homeless through the Visions Program.”

Jenkins, a psychology teacher at TCC South and project manager for Visions Unlimited at TCC South, delivered the commencement address.

“It was a wonderful celebration and what really touched my spirit was that each student was able to say something about their journey,” Jenkins said. “Many of them talked about Visions and our team and the help that they received from us and Cornerstone. It was just the right size where we could socially distance ourselves but yet take some time out to just pause and really celebrate each graduate’s journey.”

In addition to being Cornerstone New Life Center residents, Smith, Brooks and Clermont are alumni of the Visions Unlimited Program at TCC South, which offers homeless people a chance for a better future through higher education. Launched more than a decade ago, the program partners with Catholic Charities, Union Gospel Mission and CAN’s New Life Center to provide educational opportunities that help change lives. Approximately 40 Visions students have gone on to earn an associate degree or certificate from TCC.

“While listening to each graduate address the crowd, it was apparent that the collaboration between Cornerstone Assistance Network, Tarrant County College Visions Program and Union Gospel Mission was the key to their success,” Posey said. “Each of these three entities had the opportunity to impart their expertise at just the right time for each student as they traveled on their journey to success and independence.”

This fall, Clermont plans to return to TCC to pursue a degree in nursing. Brooks is transferring to Tarleton State University to pursue a Bachelor of Science in Information Technology. Once he’s finished, Brooks will pursue a master’s degree in Cyber Security. Smith, who conducted research on Catalina Island and spoke at the Geospatial Summit in Los Angeles, is considering his options. Before leaving USC, Smith’s advisor encouraged him to pursue a data science-related doctorate at the Massachusetts Institute of Technology.

“I think the most reliable avenue for me at this point in my life is to work in science, government or get a Ph.D.” Smith plans to make a decision in August.

Jenkins will continue to celebrate Smith’s success. “It means a whole lot when you see someone come from a homeless shelter being told they need to apply to MIT. It’s just mind blowing,”

To learn more about the empowering work being done by TCC’s Visions Unlimited program, visit https://www.tccd.edu/community/outreach-services/visions-unlimited/