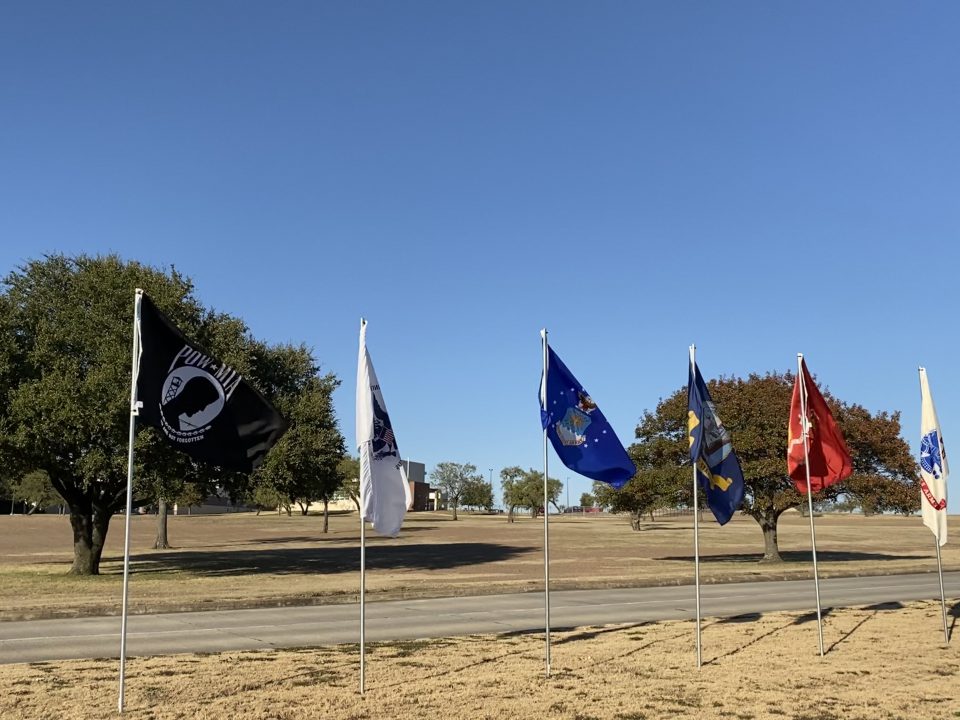 Faculty, staff, and about 30 students gathered in the reading room of the Walsh Library on Veterans Day to attend a presentation on the history of the Purple Heart from Rodney Pearson,  instructor of history and a U.S. Army veteran. Alex Potemkin, Director of Library Services on TCC Northwest and also a U.S. Army veteran, gave the welcome.

“The library is the perfect place to host campus events and programs because at the heart of any library is the idea that a library is the place for the open and free exchange of thoughts and ideas,” Potemkin said. “It is neutral ground to recognize and celebrate the things that make us unique and the things that we all share in common. The library brings the community (students, faculty, staff, and the public) together to explore new ideas, challenge conventional thinking, and continue the pursuit of lifelong learning.”

During his welcome, Potemkin told a story about his father’s service in Vietnam.  Potemkin’s father and a friend were on a supply run when their truck went over a landmine. Both were thrown from the truck and, ultimately, they both received the Purple Heart.

Pearson’s presentation covered the history of the Purple Heart as well as the cultural impact that it has had.  The first version of what is now called the Purple Heart was commissioned by General George Washington during the Revolutionary War, when it was called the Badge for Military Merit.

In the “General Orders” for August 7, 1782, General Washington ordered, “The General, ever desirous to cherish a virtuous ambition in his soldiers, as well as to foster and encourage every species of Military Merit, directs that whenever any singular meritorious action is performed, the author of it shall be permitted to wear on his facings, over his left breast, the figure of a heart in purple cloth, edged with a narrow lace or binding. Not only instances of unusual gallantry, but also of extraordinary fidelity and essential service in any way shall meet with due reward.”

After extensive lobbying from General Douglas MacArthur and others, in 1932 the U.S. War Department created the Order of the Purple Heart on Executive Order from President Herbert Hoover. The Executive Order was signed on the bi-centennial of Washington’s birthday. More than 1 million Purple Hearts were awarded during WWII. Since Sept. 11, 2001, more than 40,000 Purple Hearts have been awarded.

Pearson’s presentation highlighted several notable Americans to have been awarded the Purple Heart. For example, one of the first soldiers to receive the Badge for Military Merit was Elijah Chruchill, a member of the 2nd Continental Light Dragoons who carried out raids by whale boat. Also included were Lieutenant Annie G. Fox, the first woman to be awarded the Purple Heart, for her actions during the bombing of Pearl Harbor in 1941 and Staff Sergeant Brandon Camacho, who has been dubbed “The Bullet Magnet” because he has received five Purple Hearts while deployed in Iraq and Afghanistan.

Pearson’s presentation was part of a larger observance of Veterans Day at TCC Northwest.  Along with the History of the Purple Heart presentation, TCC’s Veteran’s Success Center also organized the Portrait of a Veteran, a multimedia display of pictures of faculty and staff who have served in the military, Veteran Boots to Suits, a program dedicated to providing veteran students with hands-on career preparation, networking opportunities, and help with reintegration into the workforce, as well as an appreciation breakfast for veteran and military-connected students. Tarrant County College has received the Military Order of the Purple Heart College Designation for its continued service to veterans and their families..

“As with all student groups and populations, we feel it is important to not only highlight our veterans and their uniqueness–what they offer and what makes them unique–but also to provide others’ opportunities to learn and understand cultural differences in a safe and non-threatening environment,” said Bill Alexander, TCC Northwest’s Veteran Counselor and a veteran of the U.S. Navy.  “As we often say, education does not just happen in the classroom. Education happens all around us. As we engage in understanding other cultures, we subconsciously remove our own barriers and allow others the opportunity to explore and learn about us, too. This is why it is important to have an awareness of military culture and to stand with others and honor veterans past and present who served and secured the freedoms we have today.”

Pearson ended his presentation with a discussion of the cultural impact of the Purple Heart. He left the audience with a quote from General Douglas MacArthur, who said of the Purple Heart, “it is not intended to merely commemorate the dead, but to animate and inspire the living.”

When asked why he chose to participate in this year’s observance of Veterans Day, Pearson said, “I always try to help the Vet Center and the Student Veteran’s Association any way I can. Given my background, I felt the best thing I could offer was to put together a talk that honors the award and the sacrifices made by its recipients. That speaks to me as both a veteran and an historian. I hope I accomplished the goal of honoring them.”