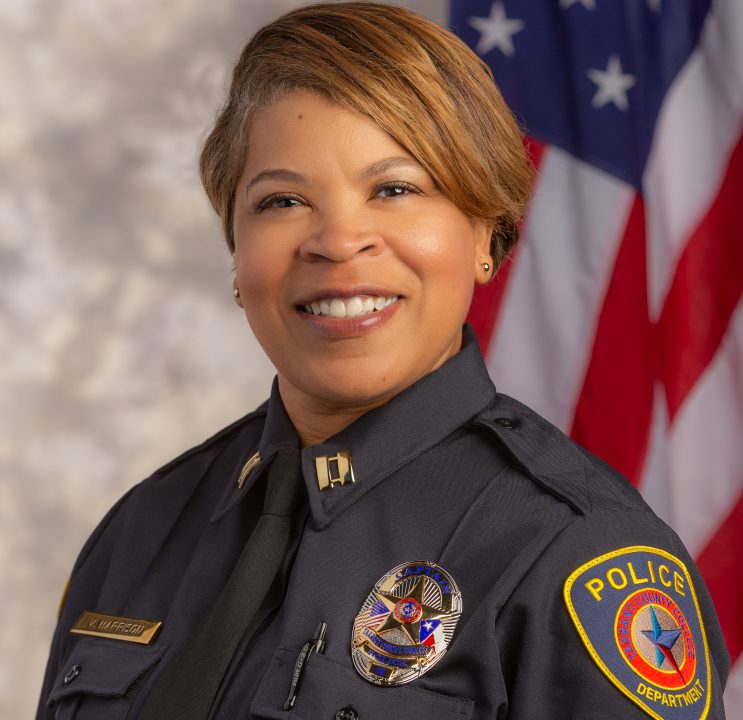 When she was growing up in Flint, Mich., Capt. VaNessa Harrison’s house was around the corner from a nightclub. Patrons of the club, fearing imminent arrest, would often throw contraband into the shrubs in front of her house. The police would come by and shine a big spotlight into the shrubs, looking for evidence. Harrison was intrigued. Sometimes the police would miss items, but Harrison would find them anyway. She liked to investigate.

Now captain of the police force at TCC Northwest, Harrison brings more than 23 years of law enforcement experience. She joined the Arlington Police Department in 1995, starting out in patrol. Over the years, Harrison also worked in crime prevention, personnel and recruiting, media and internal affairs.  In addition to this experience, Harrison also worked in Arlington PD’s training academy as the coordinator. She has more than 15 years of experience in teaching both at the training academy and in front of other audiences. Recently, she taught communication and problem solving at the Council of Governments for the North Texas Region.

Harrison attributes her varied experiences in the Arlington PD to being naturally curious and hardworking. She enjoys learning new things and building new skill sets.

“I love challenges. Once I feel like I’ve honed a skill, I move on to the next skill,” she said.

While taking some time away from law enforcement to raise her three young children, Harrison felt the need to keep learning. She learned Spanish, which proved quite useful when she was selected in 2012 by the International County and Municipal Association to work with the Panama City Police Department to develop their community-based policing program.

She decided to pursue this position at TCC because she wanted her next place of employment to be a place where she could transfer her skills and help other officers advance in their careers.

“I felt like I wanted to find a new place that feels like a family environment, a place where folks help each other and I would feel comfortable being there for a long time, and I found that place at TCC!” she said.

She also finds resonance in TCC’s goal to serve the community, due to her own commitment to community engagement.

“A police department can’t be successful without engaging with the community,” she said.  “Modern policing has to be a balance between active community engagement and enforcement.”  Harrison is looking forward to learning the campus environment and getting to know TCC Northwest’s faculty, students and staff.