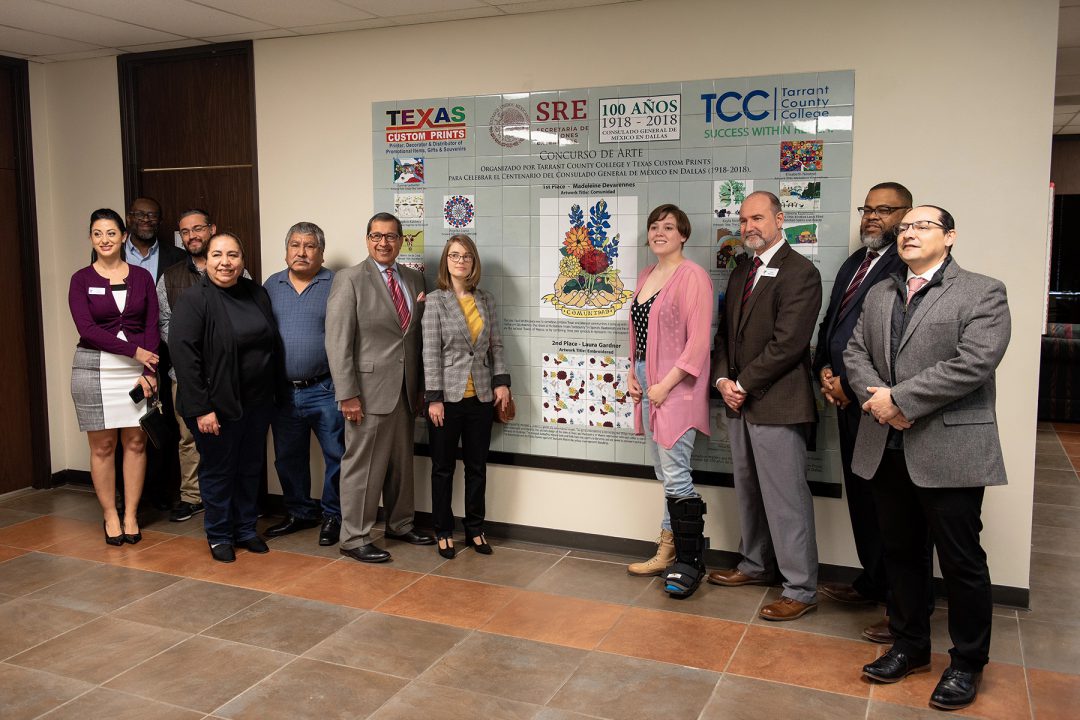 The Mexican Consulate welcomed a thought-provoking art installation Monday with the unveiling of an 8’ x 6’ seamless tile mural featuring artwork submitted by more than 30 Tarrant County College art students as part of its contest to commemorate the 100th anniversary of the Mexican Consulate.

“Art inspires partnerships, for this day would not have been possible without the creative collaboration between the Mexican Consulate and TCC,” said TCC Trinity River President Sean Madison. “Most importantly, art has the capacity to build bridges between cultures, reminding us of our shared ideas about beauty and humanity.  For me, that’s what ‘community’ is all about, and this tile mural will be a constant reminder of that ideal.”

First place winner Madeleine Devarennes and second place winner Lauren Gardner were recognized in front of nearly 100 attendees during a special ceremony held in the Consulate’s Documentation Department waiting area to highlight student artwork that depicted the interconnected communities of Texas and Mexico.

“It’s a huge honor to be standing here after all this time,” said Devarennes. “Also, it presents such a huge opportunity to have my design here permanently as an installation. [The mural] will be here forever so a lot of people are going to see my artwork.”

“The winning piece, ‘Comunidad,’ is a reminder about art and its power to create community on so many levels,” explained Madison. “Art provokes important conversations about this complex world in which we live, ideally, as neighbors and friends.”

Gardner’s “Embroidered” was inspired by the textiles of Mexico, specifically embroidered blouses. Monarch butterflies migrate back and forth between Texas and Mexico, representing exchange between the two.

“I was glad to see several contributors featured on the mural,” said Gardner. “I thought it was just going to be the first place winner up there but it was nice to see mine up there as well.”

Benito Huerta, acclaimed artist and professor at the University of Texas Arlington, judged the contest, selecting the top three winners.

“It was really great to see all their hard work fully realized,” said Janae Corrado, associate professor of art at TCC Trinity River. “While none of the winning students were any that I myself had taught, I’m really proud of the high-caliber artwork coming out of the art programs at TCC.”

At the end of the ceremony, the owners of Texas Custom Prints presented the top winners tabletop versions of the tile mural to showcase at home or other location.

“The awards that the Torreblancas presented our students are outstanding,” explained Angel Fernandez, associate professor of art at TCC Trinity River. “I was overwhelmed by the love and care that went into the project from design to fabrication to installation.” 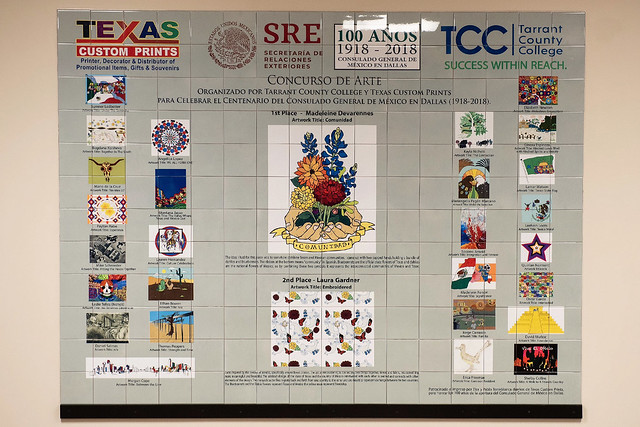