As Black History Month came to a close, students, staff and community members filled the C.A. Roberson Theatre Commons at Tarrant County College Southeast Thursday night to celebrate the contributions of African Americans in music, art and dance. Recognized as one of the largest cultural events hosted by TCC, “Celebrating Strides: Strides in the Arts” featured live performances and presentations by TCC students, Dallas Black Dance Theatre, Cris Brenham and Company (band) and much more. 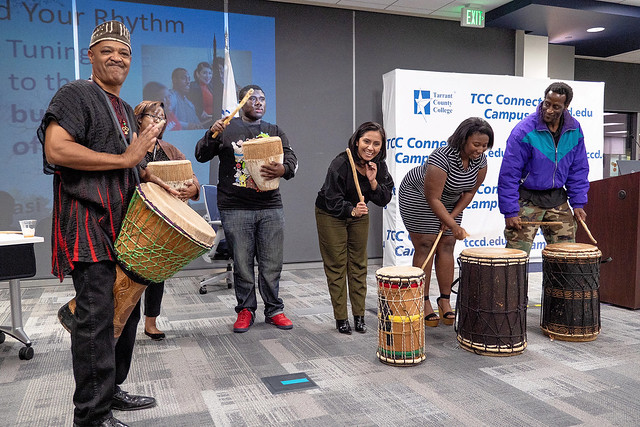 TCC Trinity River President Sean Madison is an ardent lover of the arts, so it is no surprise that he would accompany some of his students to see a live play at the Jubilee Theatre. Maritza Ramirez, a communication major at TCC Trinity River said, “It’s important for the campus to host events like this because it gives students the opportunity to learn more about diversity and cultural events. Experiencing this special event with people of various cultural backgrounds allows not only students but also faculty and staff to participate in an event that combines both the arts and Black History Month.”

In early February, TCC Trinity River hosted Cultural Arts Night featuring a dinner, discussion and the production of Obama-ology in collaboration with the Jubilee Theatre to commemorate Black History Month. Prior to leaving for the Jubilee, nearly 120 students, faculty and staff packed the River Café to participate in a civil discussion about President Barack Obama and his historic victory in 2008.  Jason Shelton, an associate professor of sociology and director of the UTA Center for African American Studies, lead the discussion. “Obama’s legacy is quite impactful and demonstrated an ability to overcome any situation or circumstance he was brought up to,” said Ramirez.

This interactive discussion not only showed the work of Obama but also provided some additional context for the play, which told the story of a young campaign worker, named Warren, who struggled with cops, his own race, and identity issues. Yet, through it, all the young man was able to learn that changing a society was not as easy as he thought it was going to be. He found himself demonstrating the ability to overcome defeat with social control and financial need. “The play itself was captivating because you were able to understand and feel the emotions that the characters were giving,” Ramirez added.