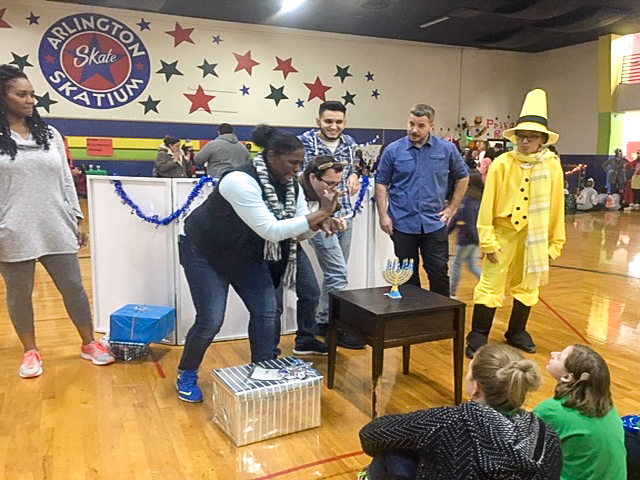 Christmas! A day where everyone celebrates the true joy of giving, receiving, wishing and being with those they love. For children, this holiday means so much more because this is the time of year where they meet the one person who does it all — Santa. They have the chance to meet and share their wish lists with him – the time of year where every child’s dreams should come true.

But not everyone can actually speak to Santa.

That is why the Sign Language Interpreting program at Tarrant County College held its annual Signing Santa event on December 7 at the Arlington Skatium. This long-standing tradition allowed deaf children around the Dallas-Fort Worth Metroplex to experience the true meaning of Christmas, as other children do.

Signing Santa features a different theme each year to show that the children can learn and have fun at the same time. This year’s theme revolved around Signing Santa’s International Holiday Storybook Adventure.

“The idea of Santa traveling the world and getting to see these people formed the theme because throughout the event we had incorporated an international perspective with the educational aspect which is literacy for reading, writing, and English,” explained Sammie Sheppard, coordinator of the sign language program.

With approximately 150 volunteers and roughly 300 children at the event, the deaf community had an opportunity to celebrate the most wonderful time of the year.

“I was involved with the story telling, so I was excited about bringing the story to life for the kids by performing it,” said Olivia, a TCC student and volunteer who happens to be deaf.

Underscoring TCC’s commitment to serving the community, the primary goal for the event was to show the children that there are people all over the globe experiencing similar circumstances. Adding activities and booths highlighting global holiday celebrations such as Kwanzaa, Honokaa, Diwali or Chinese New Year’s, along with interpreting a special story, created more global awareness.

“It was important to have had this event because signing the language is not enough,” said Sheppard. “I wanted the children to see other people who are deaf, who can really say that I have experienced the same thing as you because that is a different level of relationship that a hearing person can’t give. We wanted the kids to look up and see that there are deaf people and ask how they did what they did.”

With Christmas just around the corner, Tarrant County College wanted every child to experience the holiday with joy and cheers. The Signing Santa event itself allowed children from around the area be expressive about who they are as well as learn about different people.

As two great friends who have attended the event in the past, they too know that Signing Santa is very beneficial.

“We wanted them to know that we are all the same, but we just have different access to communication and at signing Santa it was important for them to see that they are not alone,” said Olivia.

“This event is for the kids, for them to know that they have access to their own community and their own language, said Mika. “To have role models and to be able to talk to other people.”

For more information about the Sign Language Interpreting program at TCC, visit: https://www.tccd.edu/academics/courses-and-programs/programs-of-study/sign-language-interpreting/