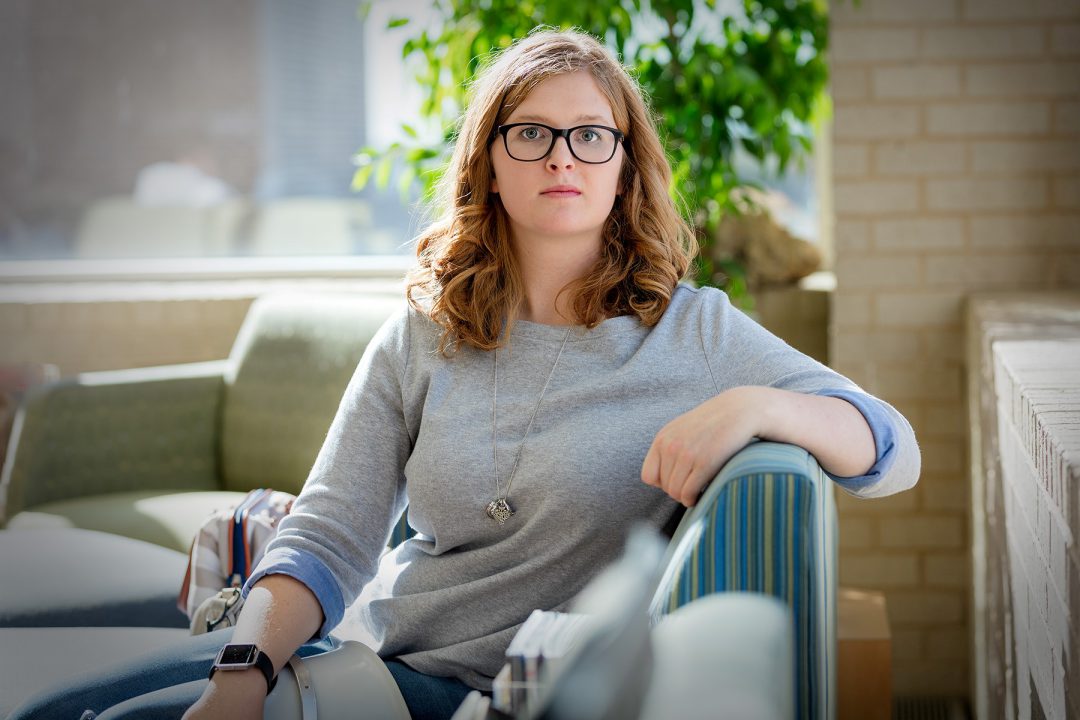 Brianna Christensen doesn’t remember most of February 10, 2014, the day that changed her life. A 15-year-old sophomore at Northwest High School in far north Fort Worth, Christensen left for home with her friend ShyAnn Hooper after track tryouts. The after-school drive should have taken just minutes. Instead, it would be 110 days before Christensen returned home.

“My last memory was walking out to the car with ShyAnn and slipping on the ice,” said Christensen.

One mile from school, they crossed an icy bridge at the same time as a pickup truck. Suddenly, the truck careened out of control and slammed head-on into Hooper’s car. Hooper was killed instantly. Paramedics rushed Christensen to the hospital.

“They did CAT scans and found that not only did I have a traumatic brain injury, but the impact caused a massive tear in my brain which was bleeding out,” said Christensen. “They had to perform a craniotomy where they removed a portion of my skull to relieve the pressure.”

Her family was told she may never walk again or lead a normal life. After three weeks in a coma, Christensen slowly regained consciousness.

“I didn’t understand why I was in this strange place,” she recalled. “I was confused and angry.”

The bleed in her brain had led to a stroke, causing her to lose all motor skills on her left side. Four weeks after the accident, Christensen transferred to a rehabilitation hospital in Dallas. She would spend three months there—a time that would greatly test her faith and challenge her in ways she never imagined.

“My first physical therapy session was extremely frustrating,” she said. “I didn’t understand why I couldn’t do the simplest things with my body like walk or even move my finger.”

Days later, Christensen saw herself in a mirror. She had no hair, was wearing a helmet, and sat hunched over in a wheelchair. Deeply shaken, she repeatedly asked what had happened.

“Eventually, I became aware that I had been in a terrible car accident. But that’s about all the information I could handle at that time,” said Christensen.

She focused on relearning basic tasks like tying her shoes, as well as regaining sensation and movement on the left side of her body. Her vision was another problem. Her eyes were out of focus, and she could see only a short distance with her left eye. The accident damaged her vocal chords as well, and she had resorted to writing things down or improvising sign language. During speech therapy, she also worked on swallowing, so she could stop using a feeding tube.

Her next challenge was school. A teacher came to the hospital to help her finish her sophomore year, but she had trouble with simple subjects like basic math.

“I was extremely angry at God and kept asking, ‘Why me?’” Christensen said.

Her depression deepened as she finally learned details of the accident and discovered that her friend Hooper had died in the crash. Christensen told her mother that she wished she could have died instead. She struggled to believe that she was strong enough to recover. It wasn’t until one day while Christensen’s mother read to her from a devotional that she says she understood she did not have to be strong enough.

“I realized that my recovery was completely in the hands of God,” said Christensen. “Once I understood that, I realized that I needed to stop worrying so much and lay my worries at God’s feet. It made everything a little more bearable.”

Christensen’s mother Shelley noticed the shift in her outlook.

“At first, it was heartbreaking to watch her struggle to do the simplest of tasks,” she said. “But as I watched her progress, I was so proud and inspired by her refusal to give up.”

Christensen set a goal for herself: to walk out of the rehab hospital on her last day. And on May 31, 2014, she did just that, with her mother’s hands around her waist and her cousin following her with a wheelchair.

“It felt so freeing, like I was breaking off these rusty chains that had been holding me down ever since I woke up from my coma,” said Christensen. “I was so happy to be going home.”

Christensen transitioned to an outpatient rehab facility and, a year after the accident, she returned to school. In June 2016, she graduated on time, with her class—and walked across the stage to receive her diploma. That summer, she enrolled at Tarrant County College.

“When I started college, I thought it would be best to take a break from rehab for a while, but during fall 2017 I decided to go back,” said Christensen, who uses a leg brace to walk and has very limited movement in her left arm and hand. “My instructors at TCC are very understanding and willing to help me with my busy schedule. The Student Accessibility Resources (SAR) department has been vital in helping me where I have difficulties, and they help me pick the classes that will work best for me and my career path.”

TCC Northeast SAR Coordinator Kimberly Eason says her office was able to provide Christensen an alternative testing environment so she would have more time to think through questions and her answers, since the accident may delay her processing of visual and auditory information. SAR also provides her note-taking assistance.

“Brianna does not feel sorry for herself and does not want anyone else to either,” said Eason. “She makes goals that may seem unattainable, but she breaks them down into manageable tasks and literally checks them off her color-coded list.”

It’s the same sense of determination that helped her recover from the accident.

“My dad always told me that ‘if you work hard, most everything else will work out,’” she said. “As a result, I was always committed to working as hard as I could on everything I did. Eventually this hard work resulted in success, and it has become a habit ever since.”

She’s now working hard on her associate degree (with a 3.8 GPA) and plans go on to the University of North Texas to earn a bachelor’s degree and become a teacher.

“After the accident, I really thought about what I was going to do with my life. I realized that I had some good life lessons that I could share with the world. I then realized that the best place to teach those life lessons would be in a classroom,” she noted.

She also shares her story as a motivational speaker. Eason has heard her speak and believes others can learn a lot from Christensen.

“She has GRIT—guts, resilience, initiative, and tenacity,” said Eason. “She demonstrates the importance of having the courage to take risks, learning from mistakes, taking charge of your own circumstances, and not letting others tell you that you cannot do something.”

Christensen chronicles her recovery in a chapter of the book Dare to be a Difference Maker. She also plans to one day publish her own book.

“I hope to be a beacon of hope, not just for those who are disabled, but for everyone who is struggling with something in their life,” she revealed. “If I can accomplish even a small portion of my goals, I know that I can make the world a better place.”