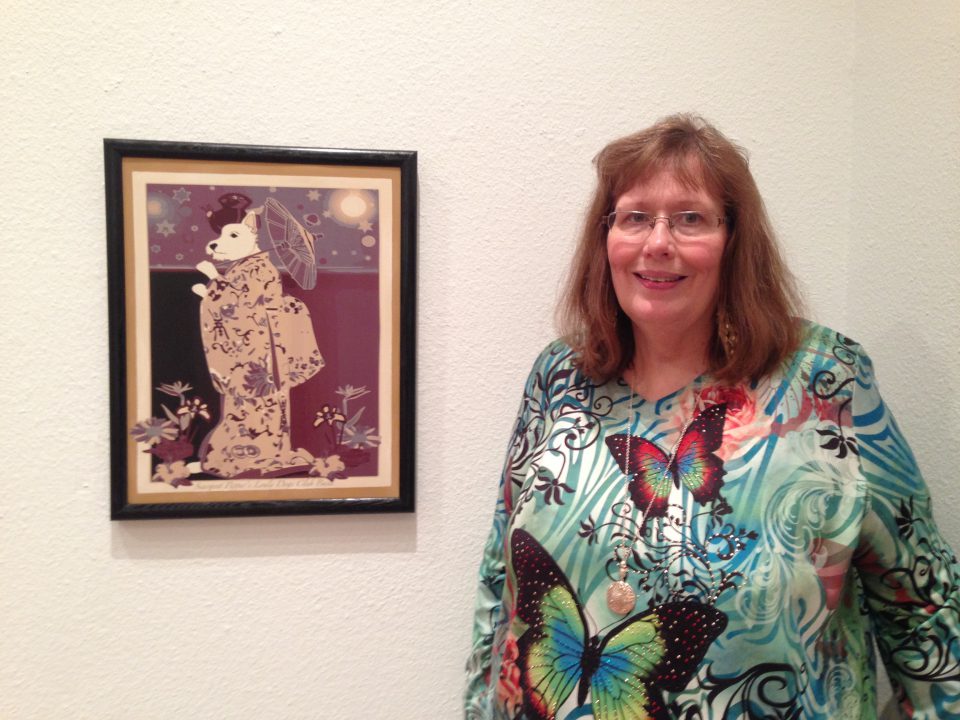 If you did see it, you were likely stunned when first entering the room. There, in our very own TCC South Gallery, were works by Manet, Holbein, Rembrandt, Rousseau, Van Gogh, Renoir and a host of other masters.

Or were they? A closer look revealed that the subjects of those pieces, most splendidly attired and gazing proudly at the viewer, were dogs.

The show, titled True Fraudulent Iconology, was a tongue-in-cheek look, though a highly satirical lens, at the icons of the art world. English said that “iconology,” a word she invented, involves the study of icons and then giving them “continued meaning.” To get that meaning, however, one has to understand the underlying icon in the first place. “Gone to the Dogs,” for instance, doesn’t make sense unless you’re familiar with the iconic Gone with the Wind poster.

In her art world, she wrote in her artist’s statement for the show, “the virtual is real, and the real is fake.”

English used dogs, she said, because there are so many people (including her) who treat their dogs like family members or like children, dressing them up. That was the case with one of her former West Highland terriers, a runt of a litter that she had to carry about and feed with a bottle until he gained strength. Dressing him up gave her the idea to write and illustrate a children’s book featuring him as “Teddy Bear.”

When she started a blog to promote the book, Teddy morphed into Dr. Theodore Bear, lecturer, artist and connoisseur of paintings by other dogs. The small portrait of him, is the most important piece in the show. “Dr. Bear became my pseudonym,” she said. “That’s who the pictures are signed by.”

The collection began in the summer of 2017 when English challenged herself to do 100 paintings in as many days. Her own dogs, former and current, served as models, and she also kept a camera handy on outings to photograph complete stranger’s dogs who caught her eye.

English asked Josh Goode, Fine Arts Department chair, if she could mount a show. He agreed, but when she began to print the digital images, they didn’t look right. “So, I had to paint them all on canvas,” she said. “I spent all summer painting all of those images.”

Eventually, some of the images on display – Vincent van Pug, Chiawatha and Rhett Rover – may find their way into a book, but in the meantime, followers of English’s blog can keep up with Dr. Bear, get all the latest “litter-ature” from librarian Little Angel and get the news from “puparazzi” Tootsie Pop (“your pooper scooper”).