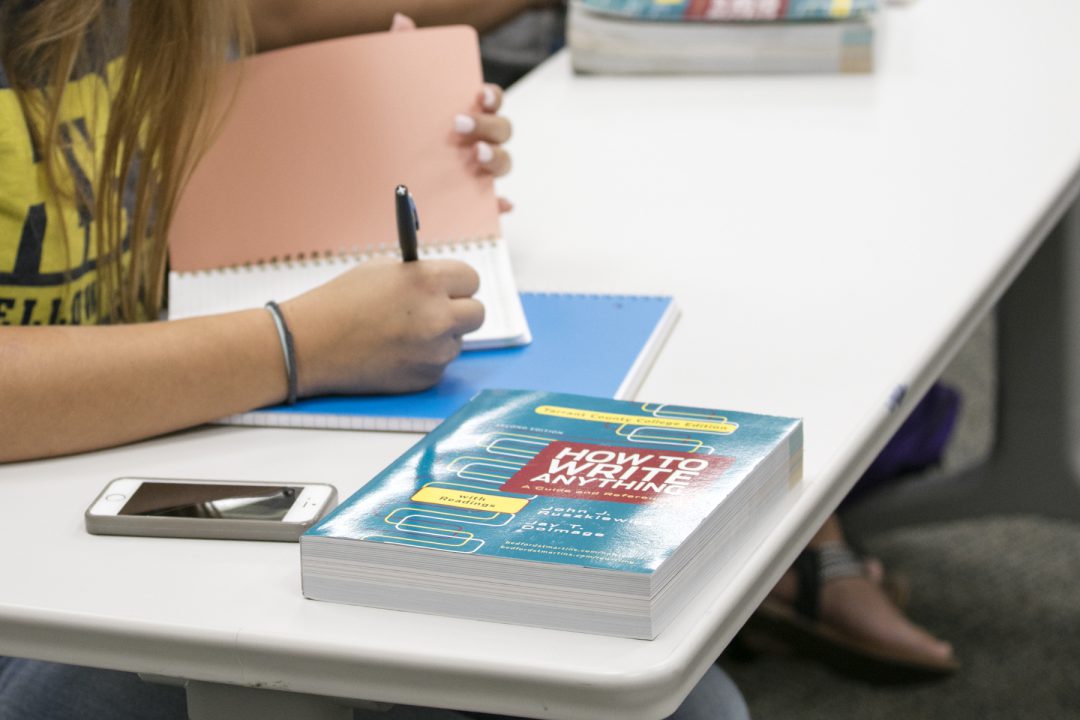 You catch flies with honey, it’s said, but what do you use to catch students? Coffee.

At least that’s the bait of preference for Gabrielle “Gabby” Raymond as she embarks on a marketing program to lure South Campus students to her underground lair, otherwise known at the Writing Center.

The plan, of course, is that those who come for a cup will see and take advantage of what’s offered, not only in the Writing Center, but also in the Language Acquisition Lab, Student Success Lab and Computer Lab. All are housed in SCLC, the subterranean facility just north of the Jenkins Garrett Library.

Coffee and bottled water had been staples in the SCLC lobby but eventually became cost prohibitive. Raymond wanted badly to bring them back, and the students that partook of them, and approached Humanities Dean Vicki Ansorge to see what might be done.

“She gave me the numbers and figures,” Raymond said. “I looked at them and saw how we could cut here and here and here.”

The biggest offenders, she saw, were not the liquids, but what held them – cardboard cups, plastic lids and the plastic water bottles. And so, combining economy with a wish to “go green,” they’ll be replaced with more ecofriendly containers.

“We’re going to have coffee mugs,” Raymond said. “We’re going to give them out to people when they come into the building, and the regulars can use them to fill up. And we’re going to have tumblers for the water and encourage people to refill them. I figure that in one year we can save maybe $5,000 or $6,000.”

The objective, however, is what lies beyond the lobby and libations. Raymond is determined to bring steak along with the sizzle in the form of programming “with a very heavy student bent.” One workshop, for instance, has students contrast the rhetorical styles of former NFL quarterback Colin Kaepernick, who’s been both praised and vilified for kneeling during the National Anthem, and President Donald Trump.

Another workshop approaches writing a rhetorical analysis using the protest song “This is America” by Childish Gambino. “We’re very into hip-hop in the Writing Center,” she said. “There’s often a powerful message there, and it’s a fantastic teaching tool. We’re very student centered, and we’re trying to link everything we do to the 3 Goals and 8 Principles. Ours, of course, is being student-ready.”

She sees the project as one of rebranding. “We’ve got to continue to do what’s working,” she said. “We have some really talented students working in the Writing Center, and I want to maximize that. We do more than what we’ve been telling people we do, and I want to get that out there.”

So far, it seems to be working. It will likely be spring before the coffee reappears, but news of the new approach to workshops is getting around. More instructors want the experience for their students, and the schedule is growing.

Maybe she’ll need a bigger pot for that coffee.