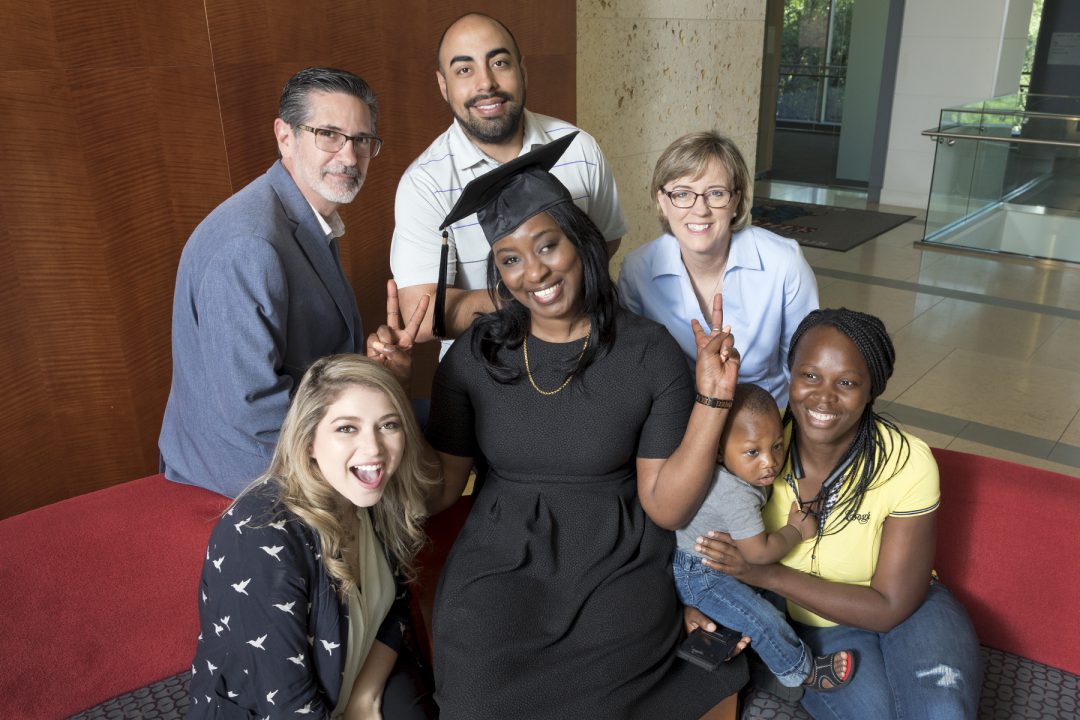 When Mimie Mande crossed the stage at graduation, it was a fitting tribute to her perseverance—and to the Tarrant County College students and employees who helped along her journey.

Mande’s story begins a world away, in the Democratic Republic of Congo. A high school student preparing to accept her diploma, Mande fell seriously ill the last week of her final exams. It was meningitis, which paralyzed her left side, caused her to lose her hearing and put her into a coma for three weeks. Doctors thought she might never recover.

“That is where everything ended for me for education,” said Mande, who slowly improved physically. “My family helped me rebuild my life. I had to learn reading, writing, talking and walking again. I had to learn everything over like a little girl.”

Her life was disrupted again when war forced her family to flee to the United States.

“We were all scared for our lives,” recalled Mande. “We lost everything, but the feeling of freedom was very good. We thanked God for giving us the opportunity to be in America where we could start our lives over. We believe in everything people say about America. It is a country where you can make your dreams come true if you believe in yourself.”

For Mande, that meant one thing: returning to her education. It had been difficult for Mande, a bright student, to not complete her high school diploma. After settling into a new life in Texas, Mande decided to go after her GED and enrolled in adult education courses at TCC South. It was not an easy process. She knew some English but was far from fluent, and her hearing loss complicated efforts to learn the language. It took Mande several attempts, but she finally earned her GED. Mande, though, was not done. She set her sights on a college degree and began taking classes at TCC Trinity River.

“The transition was not easy,” admitted Mande. “But I was so proud to become a college student.”

Then Mande faced another challenge: her home caught fire. No one was injured, but Mande lost almost everything. She found herself unable to focus and failed her classes. She resolved to do better the next semester. But it was not to be.

“One evening, I accidentally slipped on the kitchen floor,” said Mande, who still has trouble walking after her bout with meningitis. “I hit the floor hard. I had a surgery; I was very scared. I asked the doctor to save my hand.”

The injury was particularly devastating to Mande because her meningitis-induced paralysis had caused a permanent weakness in her left hand. She was almost completely reliant on a hand that was now fractured in multiple places.

“I missed many days,” remembered Mande. “When I could go to class, my mother had to walk with me and carry my backpack. Most of my semester was spent struggling. I thought, ‘Why God? Why always me?’”

The most difficult blow was still to come. In February 2015, Mande’s father passed away.

“How can you explain losing a parent just at the beginning of a new semester? Can you really have a good semester after losing your Papa?” she said. “I never spent a single day without thinking of him. Tears would run down my face while I was in class.”

The loss was a heavy burden.

“He was my inspiration,” said Mande. “He spoke only French; he didn’t know English well. I was helping him too.”

He also helped her by taking her to school and picking her up each day. Now Mande was suddenly on her own, struggling emotionally, physically and academically. Her already-faltering grades plummeted, and Mande finally lost her standing for financial aid. For most people, it would be rock bottom. For Mande, it was just another challenge to overcome.

“I went to the financial aid office to ask what I had to do, if I could appeal,” said Mande.

She started with a phone call, answered by Johnny Salas. Salas, now a success coach in the TCC Trinity River counseling office, was working in financial aid at the time. He asked Mande to come in so he could better assist her.

“When I first met her, she was a little distraught,” said Salas. “Because of the communication barrier and her hearing loss, she wasn’t understanding what people were telling her.”

Salas typed his words on a computer to help Mande understand, but he knew she needed more assistance. “I went to Student Accessibility Resources because I wanted to communicate with her better. They said, ‘Hey, we have this UbiDuo.’”

The UbiDuo is a communication device that consists of two keyboards and screens that enable an individual with hearing loss to converse with a hearing person. Using Student Accessibility Resources’ technology, Salas began to learn Mande’s story. He discovered that she was enrolled in courses in which she could not succeed. Salas knew he had to help and introduced Mande to Bill McMullen, the director of financial aid.

“Thanks to Johnny for listening and sincerely engaging with Mimie, he streamlined a lot of the processes and brought her directly to my office,” said McMullen. “Then we got Sammie Sheppard involved.”

Sheppard, an instructor in the sign language interpreting program, helped McMullen and Salas better understand what was going on. She also helped Mande enroll in non-credit American Sign Language (ASL) classes to improve her ability to communicate. Then, with assistance from McMullen and Salas, Mande’s financial aid was reinstated. She again enrolled in undergraduate classes—this time with a team of support. McMullen connected Mande with two student workers in the financial aid office: Paloma Navarrete, who was studying ASL, and Denise Rabet, who spoke French, Mande’s first language. Both students volunteered to help.

“I would tutor her in ASL and teach her new concepts in the language, fine tuning her fluency and communication,” said Navarrete. “We would do that every week along with tutoring in her other subjects.”

The path forward was challenging—“It is not easy to study in another language that you are not even able to hear,” Mande pointed out—but she kept progressing toward her goal. With tutoring, she improved her English and ASL and brought up her grades. McMullen mentored her.

“He tells me, ‘Keep trying, keep moving,’” Mande said. “He helped me and believed in me. He was able to see what others could not see in me.”

The support from TCC staff and students was life-changing. Previously, her GPA had dropped as low as 0.4. Now, Mande earned a 3.0 GPA several semesters. She received her Associate of Arts in May.

“Mimie is special because she never gave up,” said Navarrete. “She is such an incredible, strong woman with all that she had endured in her life. Even if it was a bad day, she came to school with a big smile and carried on because she knew she could do it.”

But she didn’t do it alone.

“Look at the community that helped her,” reflected McMullen. “It started with one individual sincerely listening to her and having a genuine concern for another human being.”

Mande, who now plans to earn a bachelor’s degree in accounting, wants others to know the power of persistence.

“Students face many challenges but can overcome,” she said. “Even though you may fail, keep trying, again and again. There is no magic to achievement. It is really only hard work and determination.”