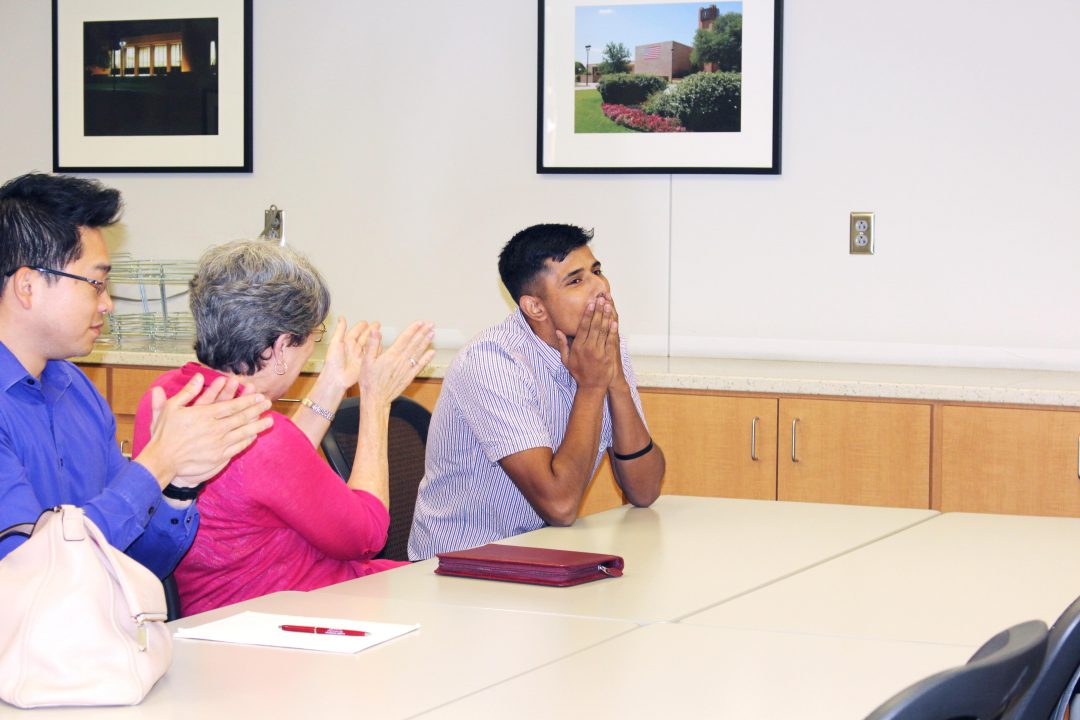 Manav Lamichhane’s university experience decidedly got off on the wrong foot.

The former Northeast student was on a pre-orientation bike trip prior to enrolling at Cornell University in Ithaca, N.Y., in August when he took a spill and wound up on crutches for almost three weeks.

“That kind of hindered me as to what I could do and couldn’t do,” he said, “and that’s why it’s kind of been harder to settle in.”

Lamichhane chose Cornell over several other offers after winning a Jack Kent Cooke Undergraduate Transfer Scholarship. The Cooke Scholarship is one of the most sought-after in the nation and annually goes to 55 community college students out of thousands who apply. It provides winners with up to $40,000 per year for the final two or three years needed to complete a degree. It covers almost all expenses, including tuition, fees, books and living expenses.

He learned of the award in April via a surprise announcement by NE President Allen Goben at a student meeting. “Now I don’t have to worry about anything,” he told Collegian reporter Kathryn Kelman. “I can do a lot of things without having to worry about money.”

Lamichhane applied to 13 selective universities, including the top schools in Texas and others such as Swarthmore, Johns Hopkins and Georgetown. He chose Cornell, he said, because of “a really good offer” and an outstanding program in his major, Human Health and Society.

“It’s health, biology and society,” he said, “and it looks at societal problems in scientific ways.” He chose health policy as his area of concentration and looks forward to graduate school and a possible career in the public health area.

First, however – freed from crutches – he’s been busy finding his way around the stately red brick buildings of the Ivy League university ranked the 19th best in the world by The Times. “I’ve been trying to get adjusted to everything,” he said, “like where the resources are and where the basic amenities are, like food, and also finding out what’s going on.”

Lamichhane is taking four courses – Biochemistry, Microeconomics, Statistics for Biology and a Nutrition Health class required for his major. He was also taking Genomics, the study of genes and genetics, until he dropped it, advised by others not to carry 16 semester hours in his first semester.

It’s definitely different from TCC in terms of approach,” he said. “They’re much more critical, and everything is application-based.”

His classmates impress him too. “Everybody in the classes is super good,” he said. “Everybody’s committed. Everybody’s there to learn. And there are classes where I’m in there with 300 other students, which is really weird coming from TCC.”

Although Cornell is one of the Ivy League universities, Lamichhane said it doesn’t have an elitist feel. “I’ve seen people with Lamborghinis here,” he said. “People have Porsches and BMWs. However, there are also people from humble backgrounds.

“I guess people have a mental picture of Ivy League schools, but everyone here has been super nice, ready to help and go the extra mile – just like in Texas. And, so far, all the skills I learned at TCC have been applicable here.”

Lamichhane, whose family emigrated from Nepal, had never spent much time away from home, but he hasn’t had time to be homesick.  “To be honest, I’ve been so busy trying to figure things out that I haven’t had the time to sit down and actually concentrate on it,” he said.   What he is missing most is Texas weather. “It’s starting to get cold up here,” he said. “People are saying this is not even winter and I’m like, ‘Are you kidding me?’ This is like November weather in Texas.”

It has been an eye-opening experience, and he has some advice for his fellow TCC students who will be transferring to universities. “Go to class to learn,” he said. “Don’t go in just thinking it’s a class you just need to pass, because when you come to a place like this, it’s all about application and thinking beyond the material.”

Now fully recovered from his mishap, Lamichhane is rapidly “finding out my way and kind of grooving in” to campus life – making up for the lost time.  It could have been worse. One of the other choices for the pre-orientation activities was rock climbing.