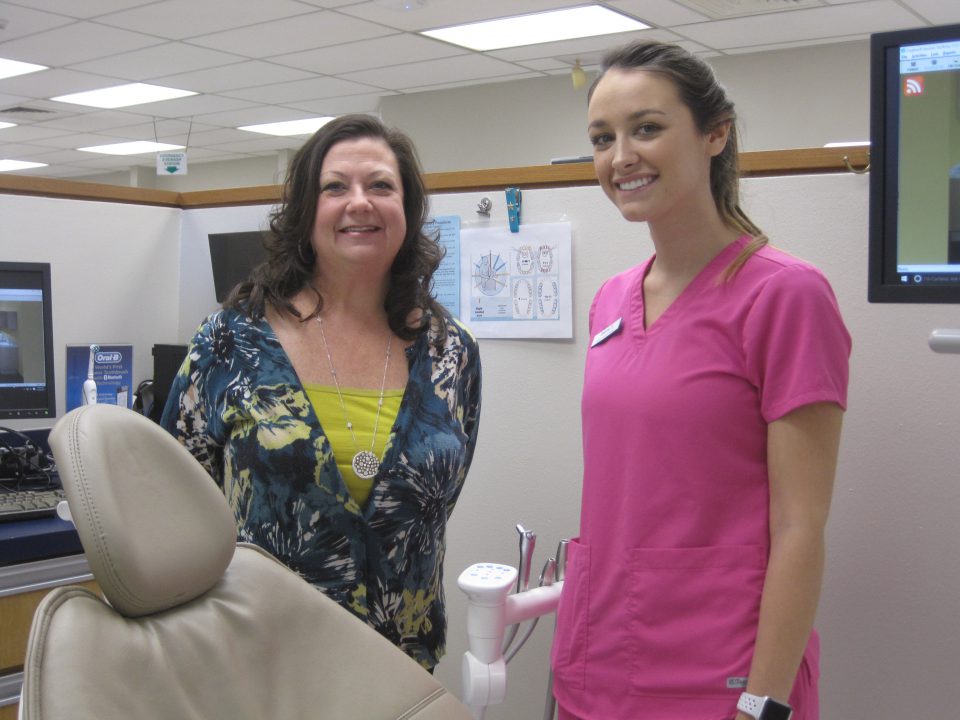 Ask Cindy O’Neal, coordinator of TCC Northeast’s Dental Hygiene Program, and get ready for an earful, an eyeful and maybe even – if you have a little tartar and lots of time – a mouthful of instruments.

“It’s like Christmas around here,” she said. “We’re getting all kinds of new toys.”

The scalers will be a special boon to the students, who previously had to buy their own at about a $1,000 a pop.

The importance of the influx of equipment goes far beyond the campus. “We make a significant community impact with our Dental Hygiene and Dental Assistant programs,” NE President Allen Goben said. “Considering salaries of graduates, cost savings on services for community members and direct support services for Cook Children’s Hospital, this new lab supports programs that make approximately a $3.2 million annual impact to our region’s economy.”

The windfall is a classic case of making lemonade out of lemons. An accreditation site visit in April turned up some problems that had to be corrected. “That’s what kind of spurred this on and got us some attention,” O’Neal said. “You hate to have that kind of thing happen, but it’s been a benefit in so many ways.”

Bottom line for the equipment, which went far beyond that necessary to correct the deficiencies, was about $497,000, and what was even nicer is that the program got all of it at once instead of over a three-year period thanks to an impromptu hallway conversation between Goben and Chancellor Eugene Giovannini.

Giovannini, aware of the accreditation report, asked how the problems would be addressed. Goben described a three-year plan, which the chancellor promptly turned into a one-year plan – a right-now plan, in fact. TCC had the money, he said, so why take so long to bring to the program what it so badly needed? Furthermore, he added, there are times the College should think in terms of months or even weeks rather than years. Before O’Neal knew it, the equipment was ordered and on its way.

The Dental Hygiene Program has come a long way since it began in 1969, said O’Neal, who remembers it being located, when she graduated in 1980, in a portable building. Technology has changed the landscape, as it has with so many other fields of study. “We’ve gone to a lot of powered instruments, like those ultrasonic scalers,” she said, “and radiology has gone digital. We actually purchased three handheld x-ray machines that can take pictures right at the chair.”

What hasn’t changed, though, is the service provided directly to campus and community. In addition to students, faculty and staff, students in the program treat patients from throughout the county and beyond. “It’s just a huge community service that we provide to a lot of people who may lack the ability to get this care in private practice,” O’Neal said.

There’s one downside, however. “We do trade people’s money for their time,” she said. “Because students are doing the work, it takes longer – multiple visits and longer time periods.”

With the new equipment up and in use, O’Neal has her eye on more improvements. Her dream is to have a complete remodeling of the entire facility so that counters and cabinetry will complement the recent acquisitions and better function with the new computers and digital equipment.

For now, however, O’Neal is more than satisfied with the upgrades and realizes other programs have their own needs. “I know the College is spending a lot of money doing what they’re doing right now,” she said. “I know there are other programs and campuses that are in need, too, so I’m trying to be patient and we’re going to make this work as best we can.”