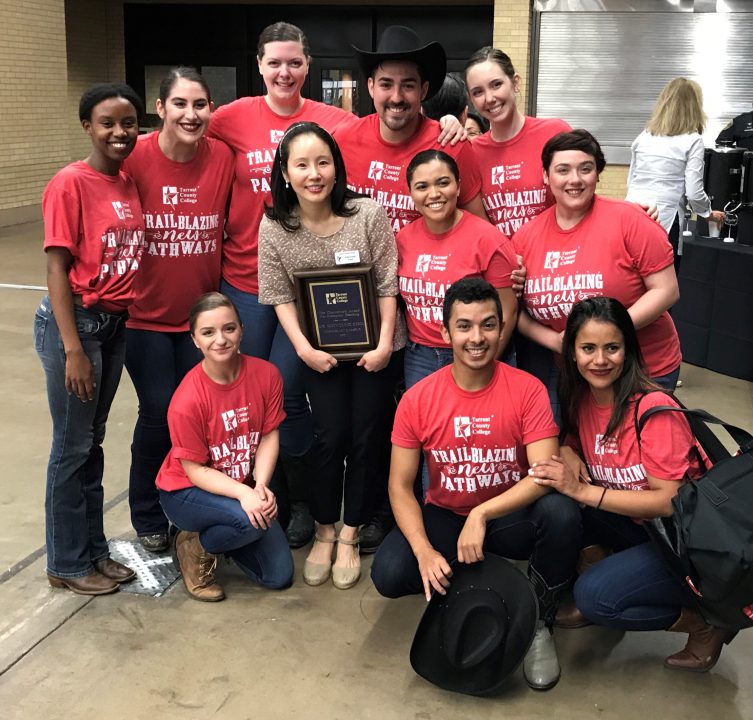 When Kihyoung Choi heard her name called as having won the 2017 Chancellor’s Award for Exemplary Teaching from Northeast Campus, her first thoughts were of her hundreds of former students.

“All their faces,” she said later. “I couldn’t think about anything else. I could see all their faces like a picture filling in.”

Then it was time to think about her present students, those in the Movers Unlimited dance company who had gathered behind her in anticipation of her award. She had not wanted them to stay after their Chancellor’s Breakfast performance. “I told them, ‘Hey, guys leave,’” she said. “If I don’t win, I’m going to be OK, but you’re going to be really disappointed. They said, ‘You’re going to win, and we’re not leaving the room.’”

The students were right. Choi looked at them and, hearing their screams of delight, realized at last that she had won and ran to the stage to accept the award from Chancellor Eugene Giovannini. Other Northeast nominees were Lillian Hansen (chemistry) and Mark Reed (philosophy).

It was only natural that Choi’s first thoughts were of her students, because, as she says, they have always been at the forefront of her career. She came from her native South Korea to earn a doctorate, intending to return after spending a year teaching dance, but a semester as a TCC adjunct changed her life.

“I just fell in love with the students, and I knew in a moment that this was the place,” she said. “TCC was my dream job, so it’s been like I’ve been getting the Chancellor’s Award every day.”

Choi has been much more than a teacher, taking on the roles of counselor, confidant and cheerleader, too. Until coming to TCC, she said, she never really felt at home in American society and she’s gone out of her way to encourage students with their own difficulties, be they financial, family or lack of confidence.

“So I really want them to feel at home when they come to my class,” she said. “It was trouble for me to find my own identity because I tried to be someone I was not. But because of all of this, I can connect with my students more.”

An admitted workaholic, Choi arrives on campus at 9 a.m. and frequently stays until midnight. Her activities extend far beyond her classes, taking Movers Unlimited throughout the community to perform and to workshops in New York and Chicago to learn.

She is also committed to public service, and her dancers do much more than dance, having raised more than $8,000 for various charities.

She said she has been so immersed in the day-to-day that it took compiling her nomination portfolio to show her the larger picture of what she and her students had accomplished. “So it was kind of a reminder,” she said, “a good reminder that whether or not I win this award, this shows that I’m going toward my goal, my life mission, my life purpose.”

The students have been quick to recognize Choi’s efforts on their behalf. Dance Club President Jose Hernandez, in his letter of support, wrote that she “helped my success as a student at TCC.  She taught me valuable life lessons I can use in the professional setting. … Through my ups and downs, she has always been there for me. Dr. Choi is the reason I love TCC.”

Her evaluations from students are full of praise for her warmth, compassion and her ability to bring out their best. One said simply, “I love you.”

In the video accompanying her award presentation at the breakfast, Northeast President Allen Goben said of Choi, “You will always find her smiling and bringing a strength of character that inspires students and co-workers alike.