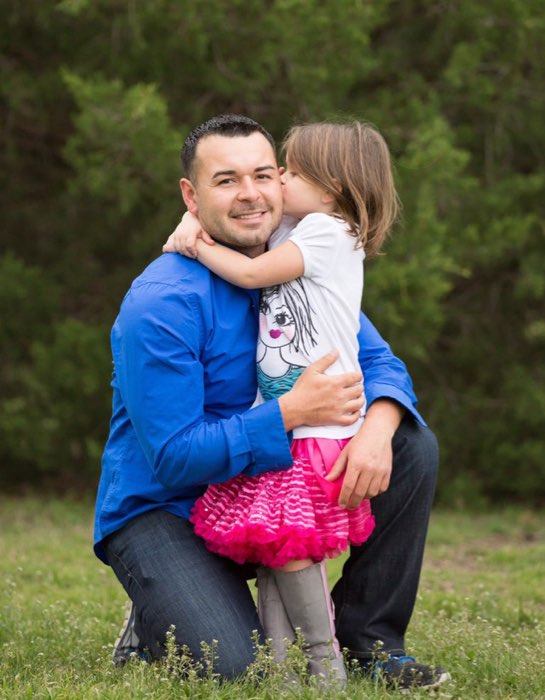 Last fall, the Tarrant County College Northeast Campus student and former U.S. Army paratrooper posted a video of himself to Facebook, thinking it would be seen by a handful of friends and family. The clip showed him reading to his 6-year-old daughter, a bedtime ritual. That might not be too remarkable except for one fact: reading aloud terrifies Lambert. That’s because he has battled a significant stutter since he spoke his first words.

“I’ve served two tours in Iraq and jumped out of airplanes, but speaking and reading aloud is the hardest thing I’ve done,” Lambert said.

Lambert, who lived his life trying to avoid words beginning with certain letters, served in the Army from 2006 to 2012. A few years after ending his military career, he decided to pursue a college degree. But there was a roadblock: Lambert’s TCC advisor told him he would eventually need to take a public speaking course.

“I just said, ‘Give it to me now,’ because I knew if I quit it would be because of that class,” Lambert recalled. “I wanted to get it done with as soon as possible so I could move past it and on to better things.”

He shared his challenges with his classmates and instructor, Paulinda Krug.

“As a class, we did public speaking anxiety, mental and physical control exercises, such as breathing, thinking of what he wanted to say before he said it and speaking slowly,” said Krug. “Lance was well liked and respected, so each time he spoke, there was positive feedback and encouragement for him from other class members.”

It occurred to Lambert that most people have no idea what it is really like to live with a stutter, so he posted a video of a speech he gave in Krug’s class. Someone commented that his speech was not that bad. He made another video, one that was more reflective of his daily struggles — the 11-minute clip of him reading “Aladdin” to daughter Avery.

Bedtime stories became even more important to the father and daughter after Avery’s first-grade teacher told Lambert she was falling behind in reading. So despite his stutter, the single dad committed to reading with Avery every night. The video captured Avery, cuddled under her blanket, sweetly and patiently helping her father sound out the words. She kisses the back of his head at one point and falls into deep sleep by the end of the story.

“It’s bonding time for us,” Lambert said. “And it helps her reading too.”

He thought a few people on Facebook would see the video. Instead, his friends and family began to share it. Thinking it might help others who stutter, Lambert posted the video to YouTube. In a matter of days, Lambert and Avery went viral. Touched by Lambert’s dedication to his daughter, big media outlets came calling: The Today Show, People Magazine, Inside Edition, Good Housekeeping, and the United Kingdom’s Daily Mail were among those that seized upon the story.

“My favorite was the Ellen Show; they called and did an interview,” he said of that head-spinning week. “It was great, but my speech is bad over the phone, so I’m sure they had some trouble understanding me.”

“Tears watching this,” wrote one commenter about Lambert’s story. Another said, “That little girl is incredibly blessed to have a dad who is willing to move beyond his comfort zone to do what is best for her.”

The stutter plunged Lambert into depression when he was growing up, but today he has a different outlook.

“I have no other choice. I have to live with it or I couldn’t live,” he said. “I’m just glad my daughter speaks fine.”

And to Lambert’s surprise, his own speech improved through Krug’s class.

“My public speaking class has made me way more confident in my speaking,” he said. “I still stutter but speak with more confidence now, which helps a lot.”

While still astonished about the attention the video received, he hopes it helped others see possibility beyond disability.

“Lance’s vulnerability and transparency in sharing his story to motivate and to help others make him a very special student,” said Krug. “In sharing his experiences, Lance reminds people to be themselves and embrace their value and worth.”

Shewanda Riley, Lambert’s English professor, agrees. “Rather than hide behind what some would call imperfections, Lance used them as a way to connect with other students who might also feel displaced because of their difference.”

The highest praise, though, comes from Avery.

“I love him and he’s good at reading,” she said of her father. “He gives me everything I need and takes me to school and gives me lots of kisses—and chicken nuggets.”