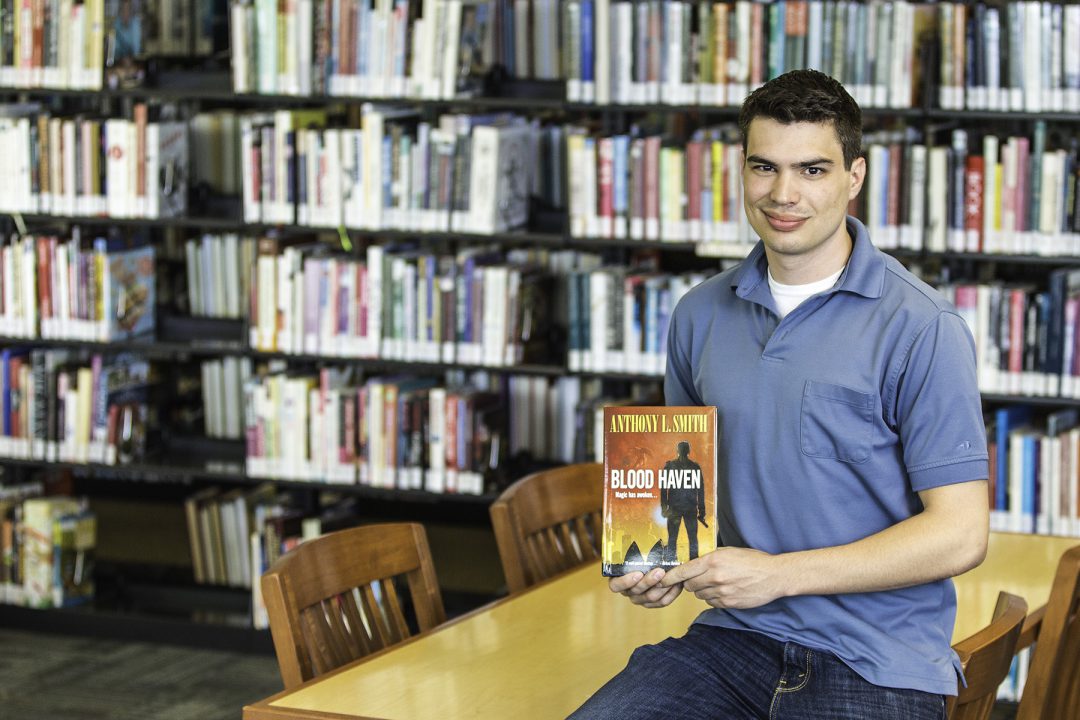 Anthony L. Smith first enrolled at TCC Northwest Campus in 2008, after graduating high school. He had plans to become a writer, but Smith wasn’t ready to commit to college. He dropped out and enlisted in the military. Several years later, Smith returned to school. Now he has both a degree and a book bearing his name—and he’s just getting started.

TCC: Why do you think college wasn’t right for you the first time around?

ALS: I was immature, lazy. I had no direction in life and was more focused on the next big video game release or the next big party than getting decent grades. It’s funny…I couldn’t get up for an 8 a.m. class and then spent the next six years of my life getting up way earlier.

TCC: You served in Arkansas and Okinawa, Japan, with the Air Force. Thank you for your service. What did you take away from your time in the military?

ALS: I learned to be unwilling to accept anything but the absolute best from myself. I learned what it means to strive for something bigger than myself and to be part of a team. It’s the people you surround yourself with who have the biggest influence on your life. I wouldn’t have gotten where I am without those people.

TCC: What was different when you returned to college?

ALS: My entire mindset. I had discipline, I had the drive. I knew what I wanted to do with my life and what I needed to do to make it happen.

TCC: While you were a TCC student, your dream came true: You published your first novel. Did you always want to be a writer?

ALS: I actually have wanted to be a writer since I was a kid, when I first started writing on an old laptop my parents didn’t use anymore. Then in high school people started telling me I was actually pretty good.

TCC: Tell us about your book.

ALS: Blood Haven is a story about what the world would be like if 1 percent of the population suddenly got magical abilities. As you can expect, chaos erupted and Sydney, Australia, became a sort of magical safe haven, eventually renamed, “Blood Haven”. The story takes place 13 years after this magical “outbreak” and focuses on Killian, a young mercenary tasked with looking after a young boy, potentially the most powerful mage in the world. Government agents and a violent cult are after him, resulting in a fair bit of action and adventure. There also are themes of friendship, romance and political turmoil.

TCC: How did you get the idea?

ALS: A friend told me about a dream in which he was running from a monster and managed to transform his car into a giant sword. I thought that would be a really cool ability to have. But then I thought: What would it be like if a bunch of people suddenly had abilities like that? How would the world react?

TCC: Getting a book published isn’t an easy process.

ALS: I tried to publish traditionally, but after almost a year I couldn’t even find an agent to look at it. The publishing community is overwhelmed with young, budding authors. I read an article that said the best thing to do is just get your name out there. Publish independently, build a network of fans, and then try the traditional route. A friend of mine had an aunt who worked as a freelance editor so I hired her to go over my manuscript. She ended up falling in love with it and recommended me to a colleague who ran a very small, independent publishing firm. She got me in contact with him and I ended up getting published not long after.

TCC: What did it feel like to see the book in print?

ALS: It was easily the proudest, most influential moment in my life. When I got the package with the test-copy I was overcome with joy. I was shaking as I flipped through the pages. To see something I had thought up, written with my time and energy, put into professionally published form…it was enough to make me want to cry.

TCC: Do you have another book in the works?

ALS: I have two I am working on, and I bounce back and forth between them based on what mood I’m in that day. I’m working on the sequel to “Blood Haven,” which I’m hoping to have completed by summer for a release later this year.

The other project I’m working on is still in its very early stages. It’s an alternate history story. That’s really all I want to delve into at this point, though I can say that the large part of my time on this story has been research so I can get it as realistic and believable as possible.

TCC: What advice do you have for students who also are working toward a big accomplishment and may be frustrated with where they are now?

ALS: Do NOT under any circumstances give up. Very few are lucky enough to have their accomplishments just fall into their lap. It takes hard work, drive, to get it done. There will be setbacks, there will be heartbreak, but you have to know deep down that it is worth the pain in the end. And speaking from experience, it absolutely is.

TCC: While you’re studying at UNT, you are working at the Erma C. Johnson Hadley Northwest Center of Excellence in Aviation, Transportation & Logistics. What brought you back to TCC?

ALS: TCC is a college and understands better than any other work environment what it means to try to work and go to school at the same time. When I saw there was a position available to work at a campus that deals primarily with aviation, I figured it had to be a sign. I applied and got hired a few months later.

TCC: What do you do for the College?

ALS: I work as an administrative assistant to the campus’s lead coordinator. I help promote and market classes, reach out to potential students and build the Campus’s professional network. It’s great experience because I want to work in the literary field, either as an agent or an editor, and that requires the same kind of professional outreach I’ve been learning and practicing here.

TCC: What are your other aspirations?

ALS: If I could be the next J.K. Rowling and do nothing but write full time and make millions, I would be living the dream. However, I would be completely satisfied working as an agent or editor and writing on the side. I also want to help young, aspiring authors in a way that I never experienced. When I get my master’s, I wouldn’t mind teaching part time as well. We’ll see where life takes me.

Anthony Smith is majoring in communication studies, with a minor in creative writing, at the University of North Texas. He plans to complete his bachelor’s degree in fall 2018 or spring 2019.
This story is the latest in a series celebrating members of the TCC community who don’t let challenges stop them. Follow these links to read previous features: Salma Alvarez, Celia Mwakutuya, Jessica Caudle, Ken Moak, Melora Werlwas, Kevin Douglas, Marine Creek Collegiate High School students, students in atypical careers, Tre’Zjon Cothran and Karmin Ramos.