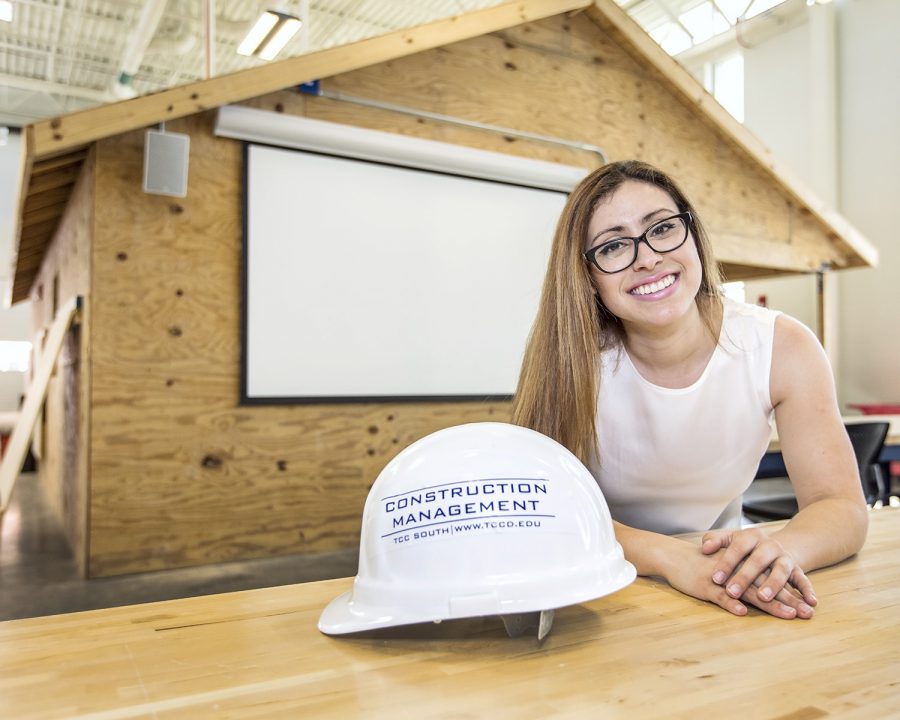 “I was watching HGTV and DIY with my parents and realized that I had a passion for construction,” said Ramos, who earned her Associate of Applied Science in Construction Management Technology along with two construction certificates in spring 2016. “I had flashbacks of me when I was a little girl making things around the house and knew I liked the process of constructing a project.”

The next day, Ramos was sitting in a TCC counselor’s office, sharing her career plans. She’d been at Tarrant County College for three years trying to figure out what to study. The counselor told her about the Construction Management Technology program, and Ramos enrolled the next semester. She earned an “A” in her first class and knew without a doubt that she had found her path.

But it’s not just Ramos herself who realizes she has a gift for the high-demand construction sciences. The National Association of Home Builders (NAHB) recently recognized her with the Outstanding Student Award. She is one of 28 students in the country to earn the recognition at this year’s convention in Orlando, Fla. Students are selected based on their academic achievements, involvement with their school’s NAHB chapter and their interest in pursuing a residential building career. Orlando Bagcal, Ph.D., associate professor and coordinator of the Construction Management Technology program at TCC South Campus, nominated Ramos for the honor.

“Truly, Karmin is a remarkable example of a persevering student who wants to achieve her education goal
s and be successful in her chosen career,” observed Bagcal.

Ramos excelled in her studies while balancing a variety of activities: serving as an intern at top-ranked construction management company Linbeck, secretary of the Association of Construction Management Students (ACMS), student senator for the TCC South Campus student government organization and a community volunteer. But success meant some difficult decisions for Ramos. After two semesters in the Construction Management Technology Program, she had to make a decision between quitting her job to focus on school or continue working, which would prolong her graduation date.

Ramos wrestled with the choice. She had been full time with her company for nearly four years.

“Part of what made it difficult to leave my job was being used to the income, but it was mostly fear of the unknown,” remembered Ramos. “I had gotten so used to being independent and being able to pay for my classes and bills and helping my parents out that it didn’t feel right quitting.”

She turned to her parents for advice.

“They thought focusing on school was a great idea, because in their home countries of Mexico and Honduras, did not have the privilege of furthering their education,” Ramos said. “They told me they wanted to see me graduate more than anything and that they would support my decision.”

Ramos finally decided the she had been putting off school for too long and left her job.

“At TCC, I found something I really enjoyed and did not want anything to get in the way. I was worried how I was going to pay for my classes, but had faith God was going to help me.”

Her financial concerns were alleviated when Westwood Contractors offered her a scholarship. She was able to focus on her studies and career plans—and those around her took note. Bagcal said Ramos took ACMS to a new level, organizing and coordinating participation in Habitat for Humanity, the Cowtown Brush-Up and Adopt-a-Highway, among other activities. When it came time for Bagcal to make a nomination for the NAHB Outstanding Student Award, Ramos rose to the top of the list.

“She is an outstanding student—not only academically but also as a leader,” Bagcal said.

Despite her talents, the award and even the nomination were a surprise to Ramos.

“I did not find out I won until they called out my name during the ceremony,” she said. “Once I heard it I was so excited, I rushed to the stage.”

It was a big moment with lasting implications.

“Winning the award brought me a lot of hope,” Ramos reflected. “Sometimes you start to feel weary when you are going after your future. You start to forget everything you have accomplished and overcome. This award reminded me how important it is to set goals and to continue to pursue them no matter the obstacles you face or how exhausted you feel, because your hard work will pay off.”

That hard work paid off not only for Ramos but also for the ACMS organization, which placed second in the nation for the 2016 Outstanding NAHB Student Chapter.

Ramos is continuing her studies at TCC. She plans to get a job over the summer with a construction firm as a project engineer, scheduler or estimator before transferring to the University of Texas at Arlington to work toward a Bachelor of Science in civil engineering. Her career path is bright. The Dallas/Fort Worth Metroplex is the largest metropolitan region in the southern United States, with more than 7 million residents. Projections call for continued population growth in the Dallas-Fort Worth-Arlington area, meaning continued demand in the construction industry.

“She was able to excel in both her studies and co-curricular activities,” he said. “Being in college is about not only academics—but at the same time being able to enjoy college life by getting actively involved and enhancing social and networking skills. Karmin mastered that balance.”